The beautiful bleakness of the "Toy Story" movies

From Woody's first crisis to the existential darkness of Forky, "Toy Story" puts our greatest fears on the table 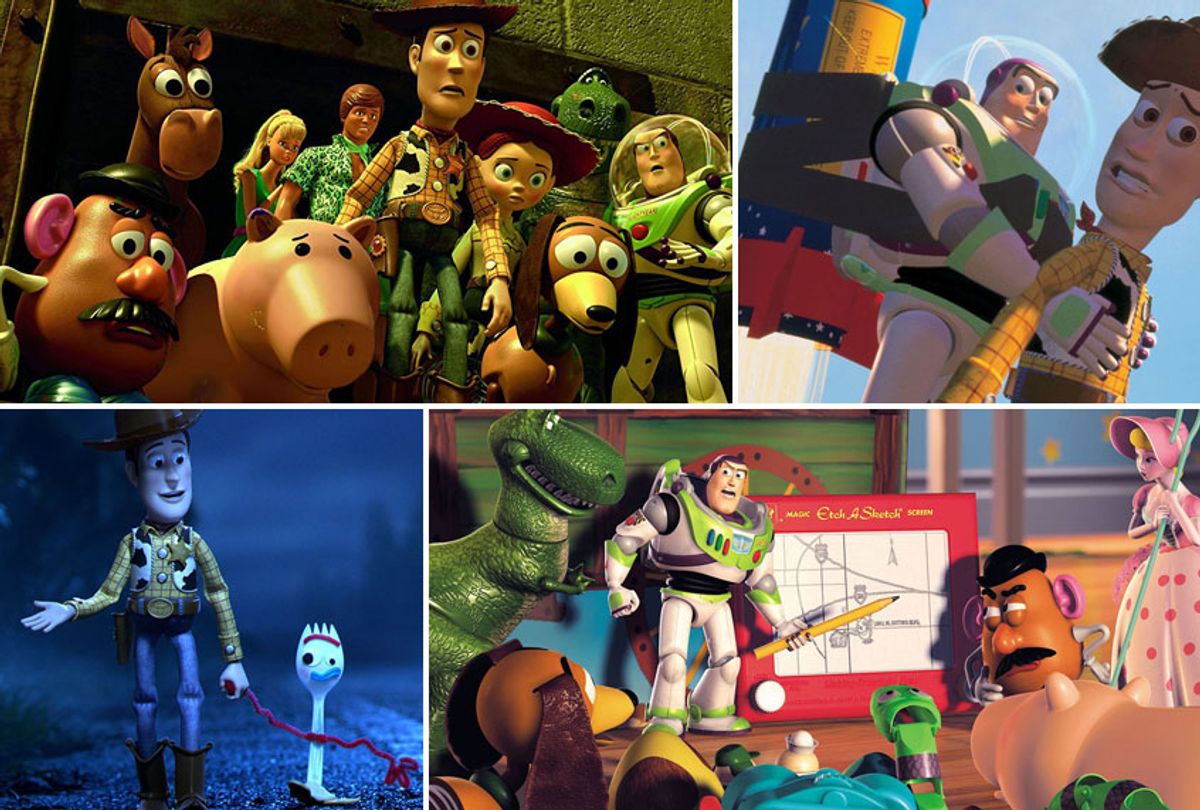 It is hard to think of a children's franchise as depressingly existential as the "Toy Story" series — and the latest installment, "Toy Story 4," is perhaps the bleakest (and most beautiful) of them all.

This isn't to say that I wouldn't recommend "Toy Story 4" as a great family film. Like the first three movies, it is filled with laughs that can be appreciated by the young and old alike and tells a compelling story with vividly realized characters and gorgeous animation. Pixar has a knack for crafting motion pictures that explore adult themes while still telling age-appropriate narratives for the little ones — artistic independence and "Ratatouille," environmentalism and "Wall-E," grief and "Up," etc. "Toy Story 4" continues this tradition, and while it packs more than a few emotional wallops, this doesn't make it any less of a bright, colorful and humor-filled experience.

At the same time, all of the "Toy Story" movies are fundamentally depressing for two reasons: They all revolve around the premise of sentient toys feeling devoid of purpose after being rejected by owners or potential owners, and they all include subplots in which toys question whether they even want to live as beings whose very existence depends on being played with by children.

In the first "Toy Story," a cowboy doll named Woody (Tom Hanks) becomes jealous of a new space ranger toy named Buzz Lightyear (Tim Allen) because he fears that a little boy named Andy is starting to love Buzz more, and that he is losing his sense of purpose. In the sequel, Woody again fears imminent rejection when Andy accidentally tears his arm and doesn't take him to cowboy camp, and the option of living as a museum exhibit presents itself to Woody as a more appealing long-term alternative to being a temporary plaything.

By the time "Toy Story 3" rolls around, Andy hasn't played with his toys for years and is about to leave for college, leaving the ones who haven't already been given away with the prospect of a future of eternal obsolescence. In "Toy Story 4," the toys are adjusting to life with a new owner, a little girl named Bonnie, as well as discovering how lost toys cope with lives in which they don't have human children as companions.

There is a depressing real-world applicability to this concept. Whether we like to admit it or not, we all depend on being wanted by other people in order to feel fulfilled in our lives (trite clichés about "not needing anyone but yourself to find happiness" notwithstanding). We require the love and/or acceptance of romantic partners, family members and friends, respect from our communities, approval by bosses, co-workers and/or the marketplace. The idea that we might be deemed unloveable or unworthy is too painful to contemplate: It can lead to a lifetime of solitude and rejection, of professional failure or even outright shame and disgrace. To admit these truths is often dismissed as weak or needy, but ignoring that they drive our lives and determine our happiness is frankly delusional. We are all playthings at the hands of the people around us, and few of us react much better than the toys in "Toy Story" when we're shunned, overlooked or forgotten.

Many of us react to this by not wanting to be a plaything at all — an altogether understandable impulse that makes its way into every one of the "Toy Story" films. In the first movie, Buzz initially believes that he is a real-life space ranger and enters a deep depression upon learning that he is just a toy. "Toy Story 2" introduces a cowgirl named Jesse (Joan Cusack) who suffers from severe PTSD after having been given away by her original owner and is initially determined to never again become attached to a child. "Toy Story 3" has a similar backstory for the villain Lotso (Ned Beatty), who was lost and replaced, although he reacts to his trauma by becoming a vindictive tyrant who lies to and tries to control the toys around him.

"Toy Story 4" brings a fresh spin to this story trend with the character of Forky (Tony Hale), a spork with pipe cleaner arms, popstick legs and cheap googly eyes atop his face who insists that he is trash rather than a toy. Like Buzz in the first film, he genuinely does not believe himself to be a plaything and finds the notion patently ludicrous. Whereas Buzz felt that way because he wrongly thought of himself as a real space adventurer, Forky correctly perceives that he was never manufactured to be a toy and had nearly been nothing but garbage. His pain stems not from delusion, but from a feeling of illegitimacy — the concept that his ignominious origins deny him the right to feel welcome among anything other than refuse. It is perhaps the darkest of all the existential crises facing the toy characters in these movies, although the film finds a clever way of having him embrace his identity as a toy by intersecting it with what he loves about garbage.

The unexpected highlight of "Toy Story 4" isn't Forky, though, but Bo Peep (Annie Potts). In the first two films she was Woody's love interest but little more, and in the third she was unceremoniously written out with a stray line of dialogue before being completely ignored. Here she is transformed into one of the most radical characters to ever appear in the franchise: A "lost toy" who doesn't merely cope with having been rejected (like Jesse in "Toy Story 2"), but enthusiastically embraces it. When she reunites with Woody, she shows him a world in which toys can have adventures and help each other without clinging to the need for children's approval — or feeling shattered when that approval is denied. Soon it becomes clear that Woody's desire to return Forky to Bonnie isn't the main story of the film; it is Bo Peep rescuing Woody from being a slave to his own expectations.

At the film's heartwrenching conclusion, Woody parts ways from the rest of the toys in the group to stay with Bo Peep and join her on her adventures. It's a bold conclusion that could have felt like a violation of the franchise's ethos (a bunch of silly toys have adventures led by the supposedly inseparable Woody and Buzz), but it works because Bo Peep's autonomous worldview has been presented so convincingly. Not only does it tie up Woody's character arc from the previous three movies in a satisfying way, but it works as an object lesson in how to deal with the existential crises identified in all four movies.

There are no easy answers to the problem of feeling purposeless. We will always depend on the approval of others (Woody still needs Bo Peep and it is unlikely he would have abandoned his child-centric view of the universe without knowing she'd be there as his companion afterward) and we will always experience internal conflicts over the people we want to be and the ones that we are. This turmoil and suffering is a constant in life. But happy endings are still possible, even if those issues are never fully resolved. That is the lesson that each "Toy Story" movie has told in their own distinct way, and they are the reason why this is one of those few franchises in which each sequel lives up to the promise of the classic original.