How we view the women of "The View": Come for viral catfights, stay for the substance 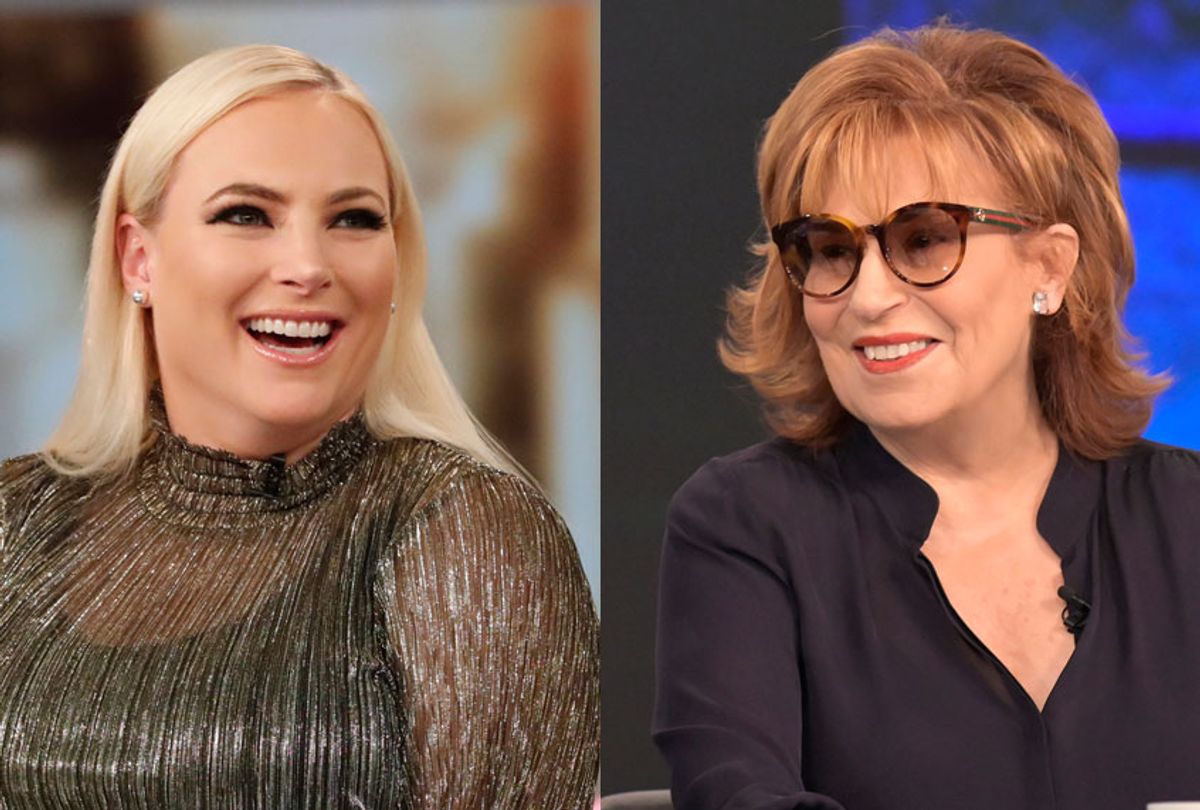 In case you missed it, on Wednesday morning Meghan McCain called her co-host and colleague Joy Behar a bitch. And she did it on air, on morning television, on ABC’s “The View.”

McCain, who usually sits quietly during discussions of hot topics statements and opts to weigh in at the end, referred to herself as the show’s “sacrificial Republican.” In response Behar cooed a sarcastic, “awwww.”

Following a well-timed commercial break, Behar and McCain explained to viewers that they use the term affectionately and frequently backstage, reassuring everyone that they enjoy each other’s company — they just like to box sometimes, that’s all. McCain also used that moment to remind the audience that she wrote a book called “America, You Sexy Bitch: A Love Letter to Freedom.”

Behar and McCain’s exchange made headlines mainly because of, I mean, that word. Uttered in the gentle climes of daytime television no less. What may have gotten lost in the brouhaha is the hot topic that instigated it: McCain and Behar were talking about whether Donald Trump’s official campaign kick-off in Florida was an accurate indicator of whether his base is still passionate about him. McCain attempted to make the case that it is, and explain why.

“Democrats still have a lot to overcome. A lot of people are still enthusiastic,” she said, going on to add, “Sometimes it’s not just they love Trump so much. It’s they hate the same things Trump hates. That’s what’s going on.”

Then Behar responded by asking what, exactly, is the object of the shared hatred. “Black people? Do you mean immigrants? Who do they hate?” This is what set off McCain.

“The View” has been a ratings champ and a reliable online traffic driver for many years, owing to a tendency among those who regularly cover the series to write up the fireworks as opposed to examining what the performers are doing at the fair. This is a mixed blessing, I suppose.

Few other daytime series have a panel as varied, outspoken and eager to debate as Barbara Walters’ creation, a group that easily connects to its stay-at-home audience by discussing politics with the same lightness as, say, fashion trends or the action on an episode of “The Real Housewives of New York.” They’re the neighborhood coffee crew people would invite into their homes, if only their neighbors lived closer, or if they spoke to them at all.

At the same time, “The View” is also about as close to a modern, friendlier version of “Crossfire,” the CNN debate series that evolved from a friendly if heated exchange of ideas to a viper pit, as Jon Stewart famously accused it of being, a den of "partisan hackery" that was "hurting America." Granted “The View” rarely if ever veers into the acid bog of screaming and nonsense where “Crossfire” ended up. But to evaluate the tenor of some post-episode coverage of the series, one might be right to fear it could be headed in that direction.

Some interpretations of “The View” debates are gendered, however, in much the same way political coverage tends to be during election years. The road to 2020 already is shaping up to repeat the past, as witnessed in the coverage of Sen. Amy Klobuchar (D-MN) and her alleged mood swings. In some quarters there’s a heightened awareness of language concerning likability or electability, that writers are more likely to require women and candidates of color to meet those expectations than white male candidates. And that same filter, whether intentionally or not, tends to be applied to “The View.”

And as we approach the Democratic primary season in earnest, it’ll be a fascinating to see how this bias manifests in post-episode coverage of ABC’s daytime hit.

“The View” is as essential a stop for 2020 candidates as late-night variety shows are, all of which are hosted by men. And yet at times pop culture coverage seems to slump it into an adjacent category to Bravo’s “Real Housewives” series, as if its panelists are bickering as opposed to debating.

But even people who don’t watch the series are aware of rumors of behind-the-scenes tension between McCain and Behar and, to a certain degree, moderator Whoopi Goldberg.

The show’s been around since 1997, but 2019 seems the year the New York Times Magazine sat up and took notice of the group’s role in political kingmaking, likely due at least in part to the popularity of journalist Ramin Setoodeh’s "Ladies Who Punch: The Explosive Inside Story of 'The View.'"

McCain in particular produces more of the show’s viral moments than her other co-hosts, although Behar and Goldberg contribute their share of jaw-droppers on a regular basis as well.

This week, in fact, Goldberg ignited a couple of debates on Twitter when she defended Democratic presidential candidate Joe Biden's comments about working with segregationists, and when she reacted to Bella Thorne’s decision to thwart a blackmailer by making nude photos of herself public by saying that famous people should not take nude photos. “Once you take that picture, it goes into the cloud, and it’s available to any hacker who wants it,” Goldberg told viewers. “If you don’t know that in 2019, this is an issue, I’m sorry, but you don’t get to do that.”

As candidates such as Beto O’Rourke and Marianne Williamson found out, “The View” is not an easy appearance compared to sitting down with the likes of Jimmy Kimmel or Jimmy Fallon.

McCain and Behar are particularly tough; this week, in response to Williamson’s position that being a political outsider with no experience in government makes her a better option in 2020 than her fellow candidates, both women pointedly shut her down by remarking that this was Trump’s position in 2016.

On that note my condolences to Washington governor Jay Inslee, who the panel declared on Friday to be such an also-ran that McCain forgot he visited the show —“Way to make an impression, bro!” she crowed — and Williamson, to whom McCain quipped, “you’re wasting our collective time.”

Conflict and controversy are essential spices to the show’s “team of rivals” formula.  Adding newest co-host Abby Huntsman, with Republican strategist and political commentator Ana Navarro stepping in weekly, tempers the bite, but only somewhat.

However, “The View” is also a prime platform to explore issues that matter most to women who are making up their minds about who they’re voting for — and not just the issues about which specific candidates are banging their drums.  Hopefully people will appreciate this more than the sniping.

Every candidate will have something to say about the economy and health care, but not everyone will have a plan to close the gender pay gap, ease the burden of child care costs and move toward a solution to improve the precarious rises in living costs in major cities — all issues important to female voters, the demographic predicted to be one of the key groups of swing voters.

And this is all on top of discussions concerning reproductive rights and abortion — issues Goldberg and McCain have been vocal about on “The View” and, in the case of the anti-choice McCain, in newspaper editorials.

Panelists on “The View” have discussed all of these subjects. In the case of abortion rights, Goldberg has vowed to keep an eye on developments as the battles rage through the courts. Going forward, whether the essential information the series provides its viewers will cut through the fog of sniping is hard to say. Hostin, an analyst for ABC, often shares context with viewers by way of reading definitions of legal terms or explaining what certain political developments mean. Unfortunately for her and viewers in general, we don’t often see her featured in conversations regarding that day’s dish.

Media analysts generally tend to laud comedians for their edginess while the action of “The View,” circulated largely via viral bites, receives write-arounds focusing on their mockery. Even its hosts acknowledge this; in one of the past week’s lighter discussion segments, the ladies discussed clips from a recent episode of “The Real Housewives of New York” featuring Bethenny Frankel caught in a frantic meltdown.

Inadvertently, perhaps, that segment exemplified the contrast between heightened reality and “Hot Topic” debate. “All I know is they make us look civilized,” Behar jokes. Let’s remember that.