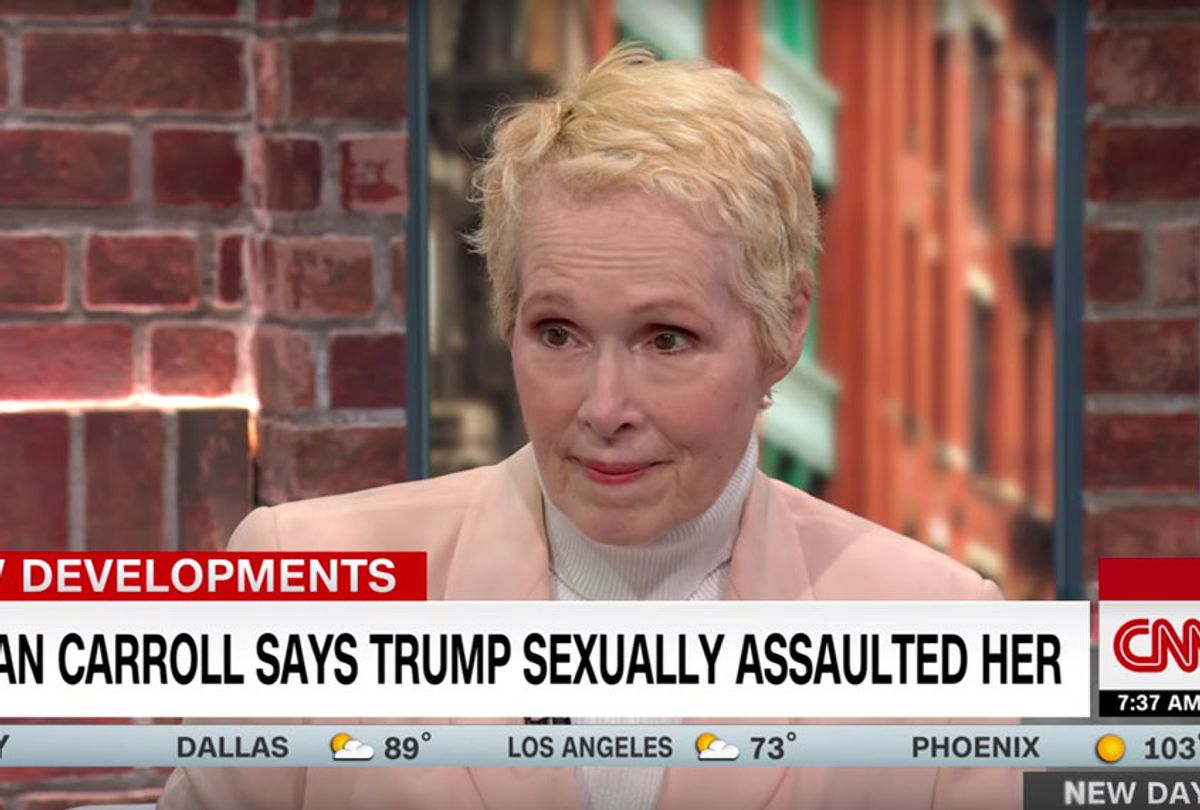 Columnist E. Jean Carroll on Monday disclosed new details of her alleged rape by President Donald Trump before he was in the White House, describing a violent altercation between the pair in a Bergdorf Goodman dressing room in the mid-1990s.

"I proceeded into the dressing room. The minute he closed that door I was banged up against the wall," she said in an interview with CNN. "I hit my head really hard, really hard."

"It shocked me," she continued. "For a moment I was stunned. Then he tried to kiss me."

Carroll alleged that Trump then pinned her up against the wall, pulled down her tights, unzipped his pants and put his penis inside her before she was able to fight him off and run away.

Carroll described Trump as a charmer, who, on the day of the attack, asked her to try on lingerie that he is considering buying as a gift.

The writer, who for years worked as an advice columnist for Elle magazine, came forward with her allegations Friday in an article published by New York magazine, in which she detailed various instances of sexual assault or attempted assault throughout her life. Her account was included in an excerpt of her upcoming book, "What Do We need Men For?: A Modest Proposal."

Trump has denied the allegations.

"I've never met this person in my life," he said Friday in a statement, although the excerpt in New York magazine was accompanied by a photograph that showed the two together at a 1987 party. "She is trying to sell a new book — that should indicate her motivation. It should be sold in the fiction section."

Carroll said she is not trying to sell a book about Trump. She pointed to the 15 other women who have accused the president of sexual misconduct during the presidential campaign, and said: "With all of the 15 or 16 women who have come forward it is the same. He denies it, he turns it around, he attacks and he threatens. Then everybody forgets it and then the next woman comes along — and I am sick of it."

"Think of how many women have come forward — nothing happens," she added. "The only thing we can do is sit with you and tell our stories so that we empower other women to come forward and tell their stories because we have to change this culture of sexual violence."

Carroll said she was not ready to speak out about her experience when Trump was running for president,  having still blamed herself for the alleged attack.

"I thought it was my fault and when I — if I was going to come forward, I'd have to say it was — I was stupid. I was a nitwit. I allowed this. So my frame of mind was not the best," she said.

Carroll said the women who came forward with accusations of sexual assault against Trump were "doing the job."

Multiple reporters and writers, including Salon's Amanda Marcotte, have criticized the press for "underplaying" the latest report of sexual assault by Trump. Notably, the New York Times did not run the story on its front page on either Saturday or Sunday, a decision that prompted criticism to which the newspaper's editor responded to today.

"This should be an incredibly serious story, deserving of at least the wall-to-wall coverage and outrage that greeted Bill Clinton for his icky-but-consensual affair with Monica Lewinsky. It certainly deserves the same overwhelming amount of coverage that was given to the accusations against Harvey Weinstein, as Weinstein is a fading movie mogul and Trump is currently the most powerful man in the world," Marcotte wrote.