Will "The Matrix" add a fourth movie? It's the perfect time to take "the red pill" back

Rumors are swirling about a forthcoming entry in "The Matrix" series. It couldn't happen at a better time 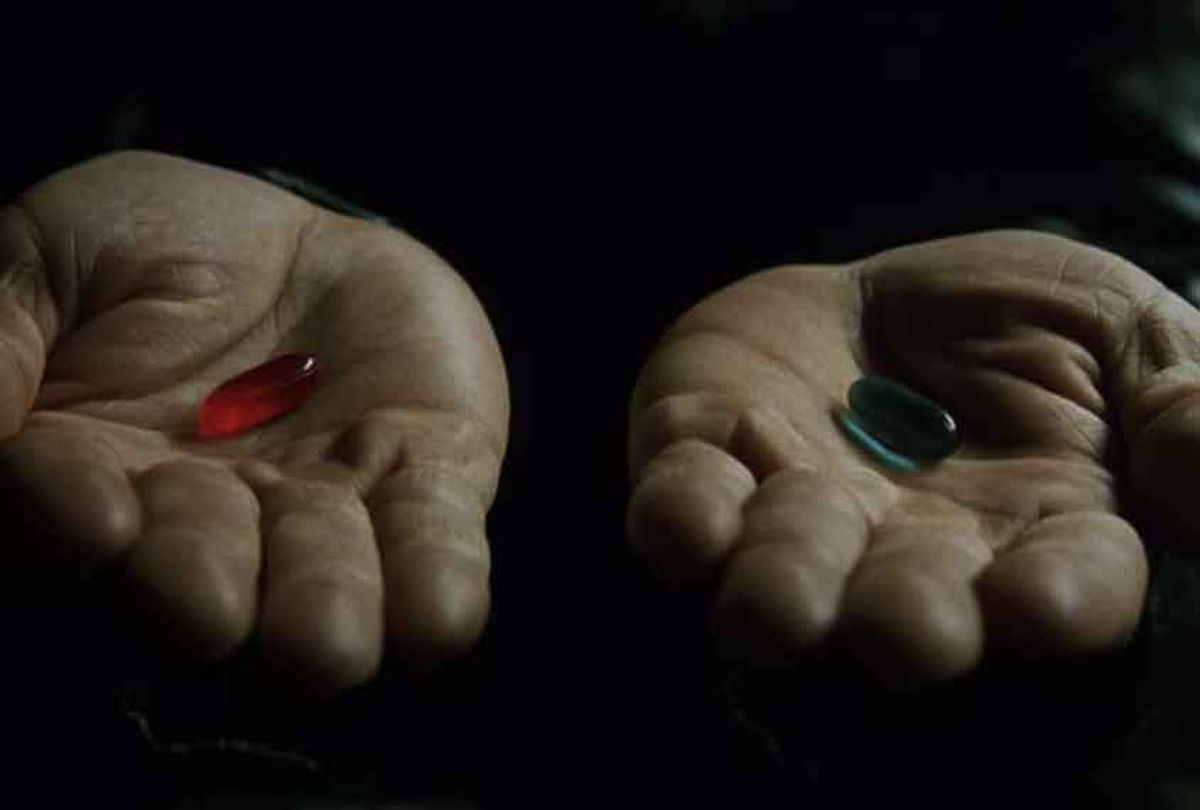 Is "The Matrix" going to get a fourth movie?

The rumor mill has been full of stories with varying degrees of reliability on that topic (see this IGN piece for the most comprehensive breakdown of who is saying what and why), but the bottom line is that if a new "Matrix" film is in the offing, it couldn't come at a more welcome time. From the moment that "The Matrix" was released in 1999 through the present day, the series has been more boldly political and philosophical than the vast majority of blockbuster properties ever dare to be. The danger of such an approach is that it risks causing a movie to feel dated in the years following its release. "The Matrix," on the other hand, feels more relevant than ever.

This is partly for the lamentable reason that one of its most iconic scenes has been appropriated by the toxic right. It's the scene at the core of the entire series' premise: Thomas A. Anderson/Neo (Keanu Reeves) is a computer programmer and hacker who is approached by a mysterious figure named Morpheus (Laurence Fishburne) who offers him two pills, one red and the other blue, with the former offering to expose him to the world's painful truths and the latter allowing him to return obliviously to his previous life. Once Anderson decides to take the former, he learns that the human race lives in a shared simulated reality called The Matrix so that intelligent machines can survive off of our bioelectric energy. The rest of the series involves his adventures with Morpheus, Trinity (Carrie-Anne Moss) and a motley crew of other rebels working to defeat the evil machines and their most frightening soldier, Agent Smith (Hugo Weaving).

It is not surprising that this premise has been used as a metaphor for a political movement — since the dawn of time various political movements have argued that they offer a harsh truth that will wake up its adherents from their false reality — but it's deeply regrettable that the one most commonly associated with the movie is anti-feminism. There are other right-wing movements that embrace The Matrix's central metaphor — from controversial conservative Candace Owens to various conspiracy theory movements — but the most notorious one are anti-feminists who, in various ways, claim that taking the red pill means waking up to a world in which feminism controls gender relations and men are in fact a deeply oppressed group. As Vulture accurately summed it up:

Feminism, the Red Pill theory tells its mostly young male adherents, is a cruel fabrication that causes personal unhappiness, societal disorder, daily chaos, global strife, and, worst of all, is the reason that you’re not having sex. Only through the red pill can you see the world for what it really is, and — finally! — get laid.

It would be nauseating to see a classic movie degraded in this way regardless of its creative genesis, but the misappropriation here is even more galling considering the Wachowskis' own backstory. While they've made it clear that they intended for the trilogy to be something of a crash course in Western philosophy (check out this video from 2012 where they talk about Jacques Derrida and Michel Foucault), they have also acknowledged that the movie can work as a metaphor for transgender experiences — hardly surprising considering that Lana and Lilly Wachowski themselves are transgender. Lana told her family that she was transgender during filming of the second and third movies in the series, and both Lana and Lilly have discussed being extremely supportive of each other and being fortunate enough to have loving and nurturing parents, according to People Magazine. Lana publicly came out as trans in 2010 and her sister did so in 2016, according to Vox.

In other words, if one believes that art contains subtext that the artists themselves may not have even intentionally put there, it is plausible that "The Matrix" contains progressive themes about gender identity which were not initially foregrounded in the project. This theory is given more plausibility by the fact that one of the main characters was initially gender fluid, according to Screen Rant, and by the fact that Lilly Wachowski told a GLAAD Media Awards ceremony in 2016 that "there's a critical eye being cast back on Lana and I's work through the lens of our transness. This is a cool thing because it's an excellent reminder that art is never static. And while the ideas of identity and transformation are critical components in our work, the bedrock that all ideas rest upon is love."

Another cruel irony of how "The Matrix" has been misused by anti-feminists is that its main star, Reeves, has distinguished himself as a screen hero to the feminist community. This isn't because of anything particularly insightful he has said, but rather because of something he has done — namely, made a point of keeping his hands removed from the bodies of female fans when taking pictures with them. While the current Keanu craze can seem a little over the top at times to outside observers, this is one aspect of it that is absolutely warranted. In an era when countless major show business figures have been exposed for exploiting their power to take advantage of women, there is something refreshing about learning that at least one major figure goes out of his way to be respectful of women's personal boundaries.

There is much more to unpack about "The Matrix" than can fit in one article: The diverse casting, the references to the venerable existential concepts pioneered by philosophers like René Descartes and Immanuel Kant, how Agent Smith's famous monologue comparing human beings to a virus both commented on existing ecological depredations and foreshadowed the ones yet to come. If nothing else, though, "The Matrix" series is clearly packed with intellectual and progressive ideas about gender — from being non-conforming in one's identity to respecting individuals across the spectrum — that mean it should never, ever be used to prop up regressive movements.