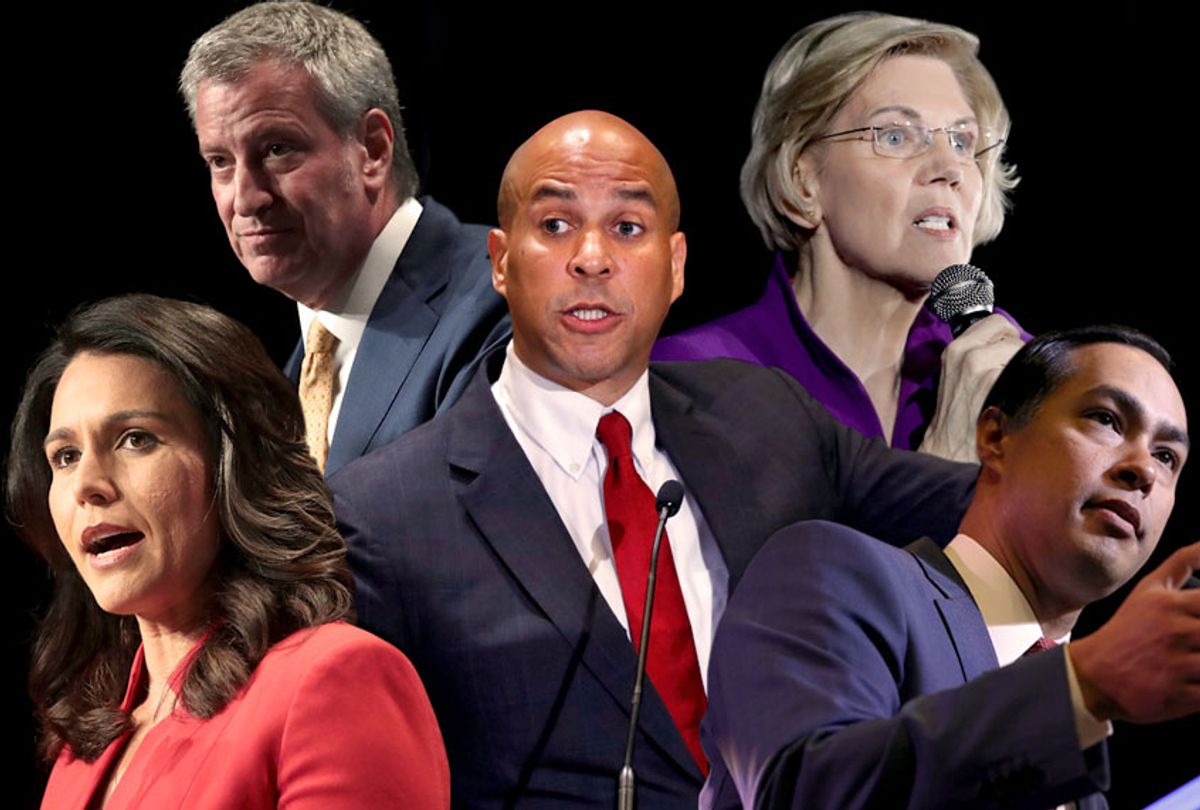 Two debates, two nights, 20 candidates: The first round of Democratic primary debates promises to be a wild and confusing mess. Even though the Democratic Party divided the field into two groups of 10, to make the debates more manageable, it's still understandable if viewers go in with questions like, "Who are these people?" and "How can I tell them apart?"

With that in mind, here's Salon's quick-and-dirty rundown of who's who in the first of two nights of Democratic debates.

The Massachussetts senator is currently running third in the polls , having slowly built her base of support up one kissed baby and shaken hand at a time. She's also benefiting from a great deal of social media love — meme-ready slogans like "She's got a plan for that" and "Nevertheless, she persisted" seem to spontaneously erupt around Warren — and several months of positive media coverage, stemming from her policy-heavy and upbeat campaign style.

Her job Wednesday night is to get a national audience to see what the crowds she's pulling on the trail see, which is a sharp and ambitious woman who is nonetheless good at explaining her often complex ideas in plain English. Despite the perception that she's in the "junior" debate, Warren will likely benefit from being the media darling of the moment and from the likely unwillingness of her fellow candidates to take shots at her during the debate.

The Candidates With Something To Prove: Sen. Cory Booker and Rep. Beto O'Rourke

Former Texas congressman O'Rourke and current New Jersey senator Booker are smart and relatively young — as well as handsome — men who should have broad appeal to people looking for that "Kennedy-esque" vibe in a candidate. (Booker is even dating a TV star!) Both have also been hustling hard, getting lots of media coverage that eludes other candidates.

However, neither has been able to channel that charm and hip-for-a-politician vibe into much juice in the polls. But, as this is the first time many voters will even start to pay attention to the race, both have an opportunity to get noticed in a way they pretty much haven't so far.

Castro hasn't gotten nearly the same amount of media attention as his fellow Texan O'Rourke, and many observers have started to count him out already. But he's got a razor-sharp intellect and has been campaigning with some genuinely bold ideas. It's quite possible that, even in this crowded field, Castro's strengths shine through and he starts to get voter and media interest that's been eluding him.

As with the crowded Republican primaries of 2016, there are some candidates here who have no business being in a presidential race. Gabbard's popularity is due to her nearly random choice to back Sen. Bernie Sanders in the 2016 primary, largely as a way to stick it to the Democratic Party because of her internal feuds with some members. The Hawaii congresswoman and military vet has used that to generate a base of support from antiwar leftists (largely male) who have little understanding of politics. Gabbard's poor record on LGBT rights (for which she has apologized) and her peculiar positions on immigration and negotiation with war criminals put a hard limit on how far she can get, though.

Klobuchar is a woman and de Blasio is tall, so that should help them stand out. But by and large, these candidates are likely to have difficulty explaining to voters why they are even bothering to run at all. The best they can hope for is they don't annoy viewers too much by taking time away from the more exciting candidates.

Remember, folks, this is just the first of what may end up being a dozen or more debates, spread out from here until next April. So while this is exciting — and much more fun than watching Donald Trump burn down the country — this primary should be regarded as a marathon, not a sprint. Drink lots of water, eat right and get some rest — although consumption of alcohol is acceptable and, under the circumstances, encouraged.