Spitting on Eric Trump, drinking with Sarah Huckabee Sanders: Questions of civility in the Trump era

As we've moved beyond politics as usual, are the rules of polite society being rewritten? 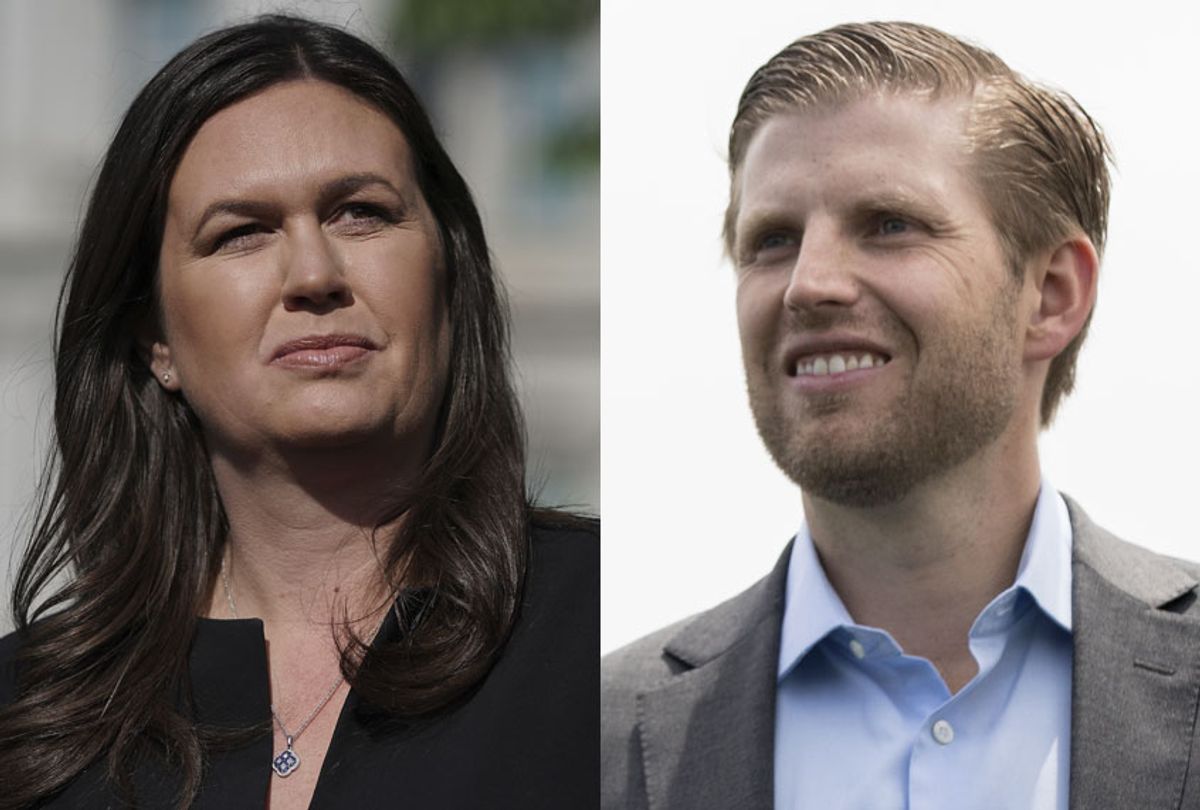 Eric Trump says he was spit on by an employee at Aviary, a high-end Chicago cocktail bar, on Tuesday night. The employee was briefly taken into Secret Service custody and then released.

In an interview with Breitbart News, Trump said it was “a purely disgusting act by someone who clearly has emotional problems.”

“For a party that preaches tolerance, this once again demonstrates they have very little civility,” he said.

Eric Trump isn’t an elected politician, but as an executive vice president of the Trump Organization he's a public face of the family business and by extension, President Donald Trump’s brand. And his complaint about the lack of civility isn’t the first time questions have come up about what kind of boundaries members of the public should preserve when they stumble across politicians or the politically powerful in off-duty scenarios.

In July 2018, Senate Majority Leader Mitch McConnell was heckled by a group of protesters as he was leaving a restaurant in his home city of Louisville, KY.

At the time, McConnell was in support of the Trump administration’s policy of detaining families who illegally crossed the border — though not of separating children from their families — and on the day he was confronted while eating, hundreds of people were also protesting outside Louisville’s Immigration and Customs Enforcement office just a few miles away.

Video shared online showed a line of people following McConnell out of the restaurant and through the parking lot. Several chanted “Vote him out!” Another called him a “turtle head.”

McConnell didn’t reply; he got into the back of an SUV with a “Team Mitch” sticker on the rear window and left.

A few months later, in October 2018, McConnell and his wife, Secretary of Transportation Elaine Chao, were confronted while eating at another Louisville restaurant. A video shows a man yelling at the couple, “Why don’t you leave the entire country alone?”

Another woman joins in briefly, but while she eventually left quietly, the man snatched McConnell’s to-go box from the table, opened the restaurant door and dumped its contents into the street.

McConnell’s incidents came on the heels of a string of similar events involving members of the Trump administration. In June 2018, Former White House press secretary Sarah Huckabee Sanders was asked to leave a popular Virginia restaurant because the owner said “that many members of her LGBT staff were uncomfortable serving Sanders.”

And days before that, Department of Homeland Security Secretary Kirstjen Nielsen was protested at a Mexican restaurant in D.C.

“Secretary Nielsen, how dare you spend your evening here eating dinner as you’re complicit in the separation and deportation of over 10,000 children,” shouted a member of the group.

They proceeded to chant “shame, shame, shame” and left after about 15 minutes.

Shortly after the Nielsen incident, The Washingtonian’s Jessica Sidman wrote that the culture of D.C. — a city of politicians — is changing.

“Encountering powerful and controversial people shopping for groceries, dining at restaurants, or hitting up SoulCycle has always been a normal facet of DC life,” Sidman wrote. “And for the most part, there’s an unspoken code that we allow them to go about their daily lives uninterrupted.”

The culture change isn’t only evident in the nation’s capital, as the Chicago and Louisville incidents demonstrate. When the daily lives of the politically powerful are interrupted — whether by a lone heckler or a group of protesters — and the inevitable story makes the social media rounds, the question of  “What happened to common courtesy?” quickly follows.

It’s a valid question. Does the health of a civilization depend on us maintaining polite manners in order to preserve the social fabric, or does it depend on us shedding and shredding them in order to make undeniable statements?

We saw the first option played out at the recent farewell party thrown by White House reporters for Sanders — the same press secretary who had gone 100 days without a press briefing, delivered false reports to reporters and fiercely defended a president who accuses the media of being “the enemy of the people.”

Amanda Darrach detailed the night for the Columbia Journalism Review for a story in which many of the attending reporters didn’t want to actually be named.

“A White House correspondent who resembled a young William Shatner (and didn’t want to be named) took a gulp of beer and said that the night felt like ‘the end of a battle, or a decent game of rugby, where at the end of the day you shake hands,’” Darach wrote. “A colleague chimed in, ‘Everybody has their issue with Sarah Sanders, but if you can’t have a drink with somebody, then all of civilization has broken down.’”

(I can’t help but think of the line from the 1996 film adaptation of Jane Austen’s “Emma” when the titular character, played by Gwyneth Paltrow, finds out her main social rival is back in town: “I must throw a party for her! Otherwise everyone will feel at once how much I dislike her.”)

On the other side of the civility spectrum, we have last night’s debacle, in which a restaurant employee reportedly spits on Eric Trump. Eric is one of the lesser players in the Trump political machine when compared to his powerful siblings Donald Jr. and Ivanka, not to mention Ivanka’s husband Jared Kushner. Even Eric’s wife Lara, a Trump campaign adviser and host of the Trump campaign’s web series “Real News Update,” has a more explicitly political role in the family. Protesting McConnell or Sanders could be seen as a way of getting the attention of someone with actual political power. Spitting on Eric is purely a gesture of contempt directed at the entire Trump family; he’s just the representative.

And while in his interview with Brietbart, Eric Trump interpreted the act as a sign his father is doing something right (“When somebody is sick enough to resort to spitting on someone, it just emphasizes a sickness and desperation and the fact that we’re winning.”) there was no reflection on how or why the general level of contempt could be reaching a boiling point.

Late last week, the deplorable conditions of a detention facility in Clint, Texas, became public after investigators spoke with nearly 50 children about their time in the facility. Investigators found children were often sleeping on cold floors, were underfed, untreated for flu and lice outbreaks, and went without basic essentials like toothbrushes.

Then yesterday, a photo began circulating of a father and his two-year-old daughter who had drowned while crossing the Rio Grande river in an effort to reach Brown, Texas. Óscar Alberto Martínez Ramírez and his daughter, Valeria, were being detained in a migrant camp on the Mexican side of the border. As conditions worsened and temperatures peaked, they attempted to cross alone to seek asylum.

So while politicians and those in political power — along with those who work to keep them in power — may want to carry on with their normal daily lives, the results of unconscionable policies under this administration have clearly moved beyond politics as usual. As members of the public grapple with this seismic shift, the rules of civility might be under revision in the process.