White House press secretary admits lying to cover for the boss. No real journalist should take her seriously 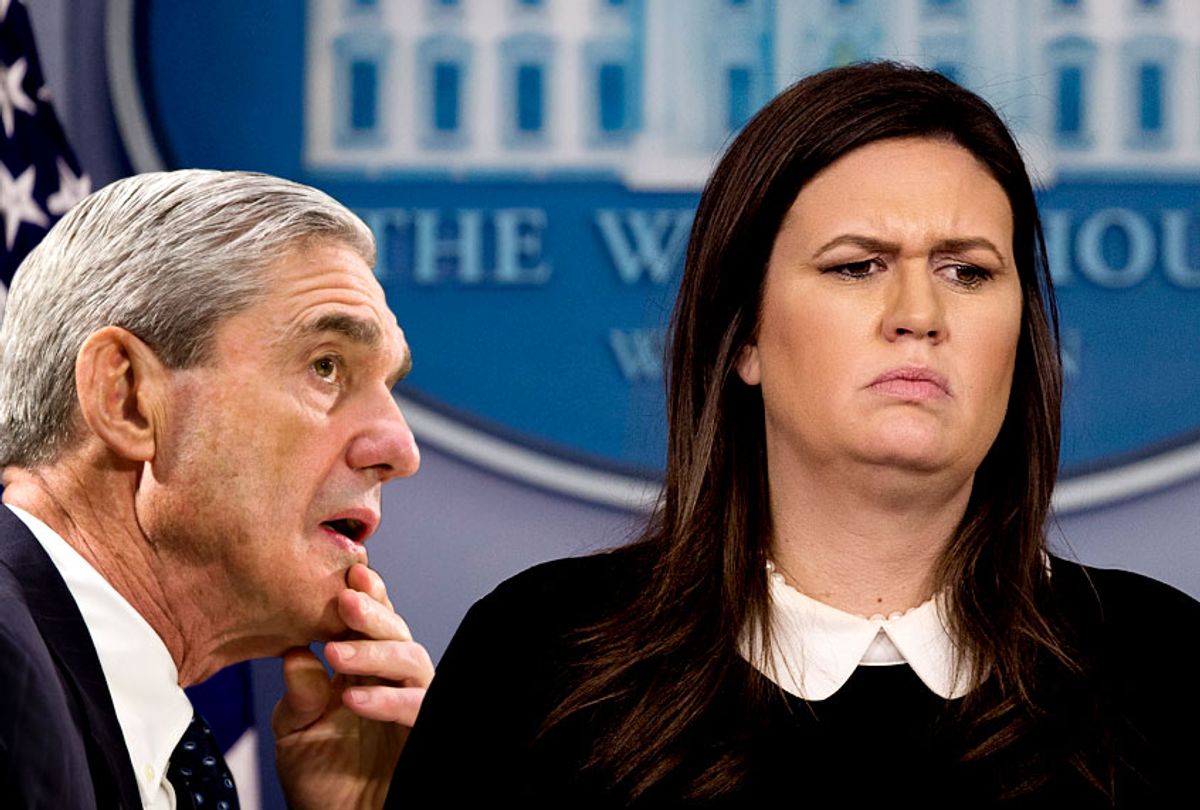 The Justice Department released on Thursday a redacted version of special counsel Robert Mueller's long-awaited 400-plus-page report on the investigation into Russian interference in the 2016 presidential election. According to the report, when Sanders faced the press at two different press conferences in May of 2017 to explain Trump’s firing of James Comey as FBI director, she told bald-faced lies.

On May 10, 2017, Sanders said that Trump “had countless conversations with members from within the FBI” and learned that “the rank and file of the FBI had lost confidence in their director.”

That same day she said that “most of America had decided on their own that Director Comey was not the person that should be leading the FBI, as evidenced by the numerous comments that we've seen from Democrat members in the House and Senate, Republican members, members of the FBI, and people across the board.”

The next day, Sanders’ claims were refuted by then-acting FBI Director Andrew McCabe, who testified under oath before the Senate Intelligence Committee that “I can confidently tell you that the majority, the vast majority of FBI employees enjoyed a deep and positive connection to Director Comey.”

On the next day, May 11, at a White House press conference, Sanders repeated her lies when pressed about this discrepancy by Fox News correspondent John Roberts.

“I have heard from countless members of the FBI that are grateful and thankful for the president’s decision and I think we may have to agree to disagree,” Sanders said. “I can speak to my own personal experience,” she added.

According to Mueller’s report, however, there is “substantial evidence” to indicate that Trump fired Comey for refusing to publicly state that the president wasn’t personally under investigation.

“In the immediate aftermath of the firing, the President dictated a press statement suggesting that he had acted based on the [Department of Justice] recommendations, and White House press officials repeated that story,” Mueller wrote in his report. “But the President had decided to fire Comey before the White House solicited those recommendations.”

It can come as no surprise that Sarah Sanders tells lies, it must still be pointed out that calling something "a slip of the tongue" is not even admitting to a lie. She hasn't quite admitted lying; she's still lying about her lie. But still there is something weakly rewarding about having that corroborated by an impartial public servant and in black and white on a DOJ document. Spinning is to be expected, since being a press secretary is all about selling the administration's position. Outright lying, however, breaks the public trust. Doing so from behind the White House podium is indefensible. Sanders should be held accountable for lying to the American people.

As the official White House representative to the supposedly free press, Sanders alleges to deliver truthful information on the policies of the top elected official in the United States. A press secretary with no integrity shouldn’t have a platform. No reputable news outlet should host her. If she refuses to relinquish her position at the podium, every White House correspondent should ask Sanders, every time she makes a statement: "Why should we believe you when you've lied to us?” or "Sarah, is this the truth or another slip of the tongue or another statement founded on nothing?"

But Sanders knows as well as anyone that she will never face consequences for anything she's ever done — or will ever do. If Trump can fire Comey on TV and beg Russia for assistance against his political opponent, his press secretary's falsehoods won't cause much of a fuss. Remember when Sanders disseminated a doctored video from an alt-right website in order to accuse CNN's Jim Acosta of physically assaulting a White House press intern? Yeah, that got lost in the avalanche of controversy and scandal that suffocates political journalists on a near-daily basis. Sanders kept her job.

Of course, an honest person cannot be Trump's press secretary, because it's not possible to speak for Trump to the press without lying. If Mueller’s two-year investigation has found anything, it is that there is no shred of accountability anywhere around the man who purportedly leads our nation.