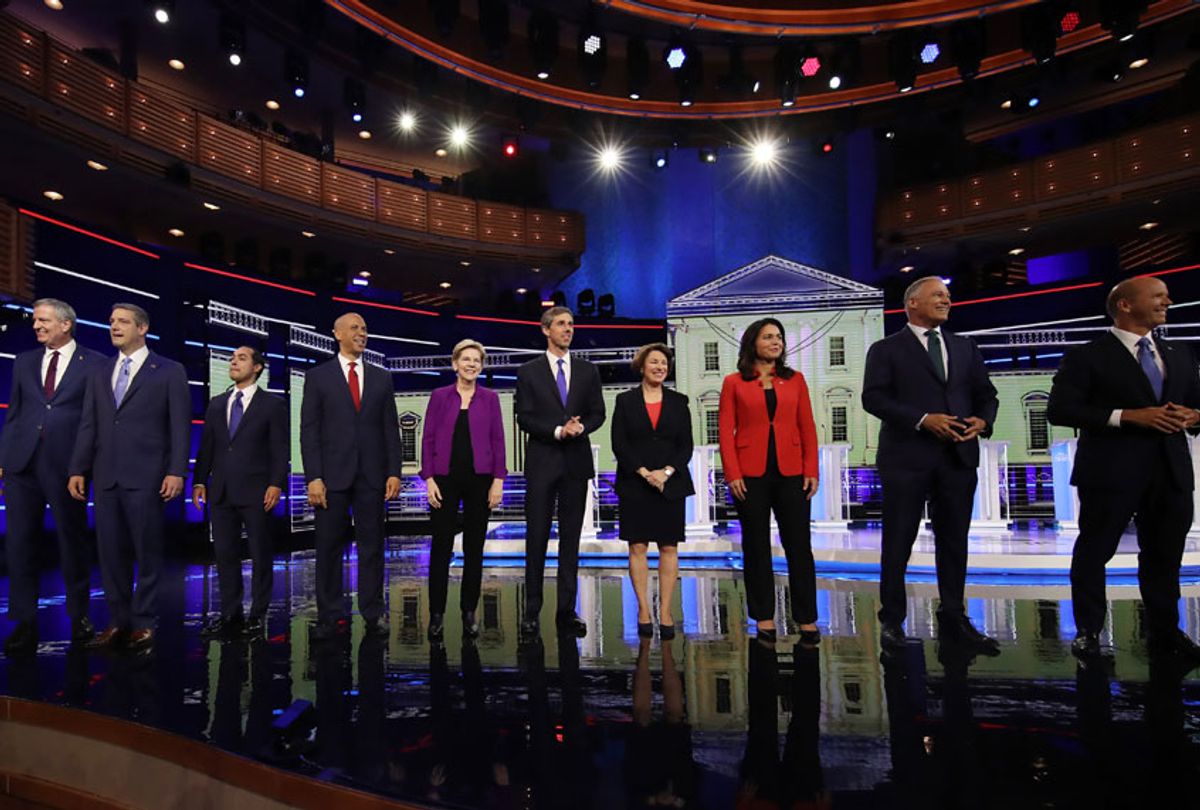 With ten candidates on stage Wednesday, the opening debate of the 2020 Democratic primary in Miami was a packed mess. And this was only the first course in a two-part event — 10 more candidates will debate on the following night.

A crowded field makes it difficult to stand out, and that means that even after a big night like a debate, the most likely result is that not much changes. But the debate was still significant, giving candidates the chance to exceed, meet, or fall below expectations for their performances.

Warren came into the debate as the frontrunner of her group, and she acted like it — while the debate moderators treated her like it. She took the first question of the debate, which was perfectly teed up for her to launch into her stump speech. She also got a lot of speaking time early on and used it well — to speak forcefully, persuasively and with detailed knowledge about the central ideas of her campaign.

The former Housing and Urban Development secretary had several moments on stage Wednesday night that stood out for his clarity of principle and his policy knowledge. He went bold by defending his proposal that unauthorized immigration be decriminalized, lining up most of the field behind him. And he went after Beto O’Rourke, a fellow Texan who has so far gained more national attention, for failing to endorse the idea. Even if viewers weren’t on board with the plan, they’ll likely remember it — and him.

Booker has largely been flying under the radar in the run-up to the debate, but he showed that he can handle a wide variety of questions on stage with confidence and authority. He also showed he isn’t afraid to go after hot button issues, proposing that all gun owners should be licensed, just like car drivers. And per the Washington Post, Booker got the most speaking time, which is almost certainly a benefit when you’re trying to get your name out there.

Much of the first half of the debate was dominated by a discussion immigration policy that was deeper, more thoughtful, and more compassionate than the vile rhetoric that has been coming out of the administration for the last two and a half years. The Democrats on stage didn’t shy away from defending both the rights of immigrants and the idea that immigration is a positive good for the United States — all while decrying Trump’s dangerous and bigoted policies. There was even a fierce debate between Castro and O’Rourke about decriminalizing unauthorized border crossing — but make no mistake: either of their approaches as articulated on Wednesday would be a massive improvement from the status quo for the many of the immigrants trying to come to the United States.

Was he actually in the debate? Oh right, he was the one who said the Taliban did 9/11. (He later corrected himself to say that the Taliban harbored Al Qaeda.)

When de Blasio announced his run for president, many residents of New York City — where he is currently the mayor — had one pressing question: Why? On stage Wednesday, de Blasio didn’t give much of answer.

Inslee’s campaign has focused on climate change as a defining issue, but his answers didn’t really bring this strength to light. He has novel ideas to bring to the table, but he didn’t find a way to connect with viewers and prove he was different than his opponents.

Gabbard’s strongest moment of the debate was when she challenged Tim Ryan about continuing the war in Afghanistan and argued that it should be ended. But she also took a question about her previous anti-LGBTQ positions, and while she gave a reasonable answer about why she changed her mind on the issue, she was put on the defensive while she remains largely unknown on a crowded stage. It’s doubtful it was enough to boost her viability.

The Minnesota senator seemed to have some of the most potential early on in the race as a popular Democrat from a key Midwestern state. And she ended the night by focusing on her past electoral success, suggesting strongly that she’d be best positioned to beat Trump in a general election. But Klobuchar didn’t seem entirely sure of herself on the crowded stage, and though she got in some digs at the president, she didn’t find a way to make herself seem like a compelling replacement.

Delaney managed to stand out somewhat from the pack by presenting himself as one of the more moderate candidates on the stage. It’s a tenable position to take in a Democratic primary, but the problem for Delaney is that it’s hard to see why any voters who find him appealing wouldn’t just rather vote for Joe Biden. His performance didn’t change that calculation at all.

O’Rourke had his moment in his tight race against Sen. Ted Cruz (R-TX), but the moment has come and passed. Perhaps he can find a new way to regain his momentum, but his answers were often halting and unsure on Wednesday, and he didn’t demonstrate an ability to capture attention when surrounded by nine other people. He held his ground when challenged by Castro on policy, but the dispute elevated Castro while failing to move the needle for O’Rourke.

The network had a major flub going into the second half of the debate with major audio issues that forced the moderators to go to commercial until the problem was resolved. This was a major night for the network, and it was an embarrassing failure.

Trump was clearly annoyed to not be the center of attention for one night, so he tried to chime in on Twitter. He called out the debate as “BORING!” while the candidates were talking about immigrants dying at the border, and he made fun of the network’s audio issues (well, that was kind of fair). He also re-upped a video that suggested he wants to run for president forever. It was mostly just sad and made him look desperate for attention, which is truly a feat when you live in the White House.