Democratic debate night 2: Kamala Harris knew she was on TV and it paid off 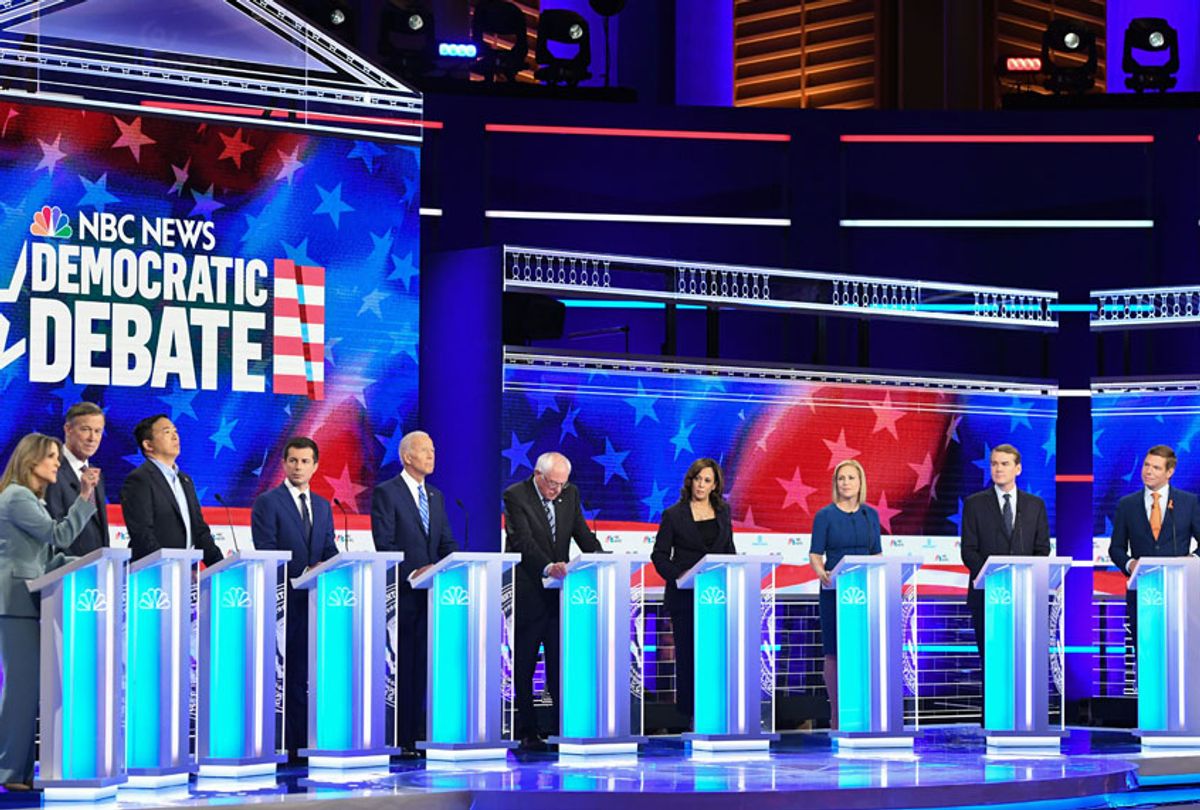 Prosecutors understand television better than most, for what is an audience if not a jury in micro? What is a moderator if not an arbitrator of sorts? And what is the best way to make your case when you’re struggling to stand out in a crowd of 20 and you’re sharing a stage with nine of them?

You show the defense’s weaknesses. You wait for your moment, and you use production’s hunger for tension and conflict to your advantage and wait for everyone else to catch up. You work the camera angles.

This is how California Sen. Kamala Harris emerged as the victor in the second Democratic presidential debate, and knocked former vice president Joe Biden back on his heels.

All told the 20-person debates weren’t as chaotic as they could have been, although night two yielded a few stormy moments of frenzied crosstalk as everyone jockeyed for their moment to shine. But even at the height of its tumult, the second debate never devolved into, as “Full Frontal” jokingly dubbed it, “Miami Fights — The Democratic Debate Kickass Kickoff Punch-Knock Throwdown.” If only.

Instead, Thursday night’s excitement is the result of a well-planned strategy of waiting, carefully aiming and opening fire. If night one inadvertently became cautionary lesson about the perils of live audio, the second debate provided a masterclass in exploiting optics and live cameras. Harris succeeded because she considered more than merely what to say or how to say it, but when to strike and whether the moderator would have the ability to put her in check.

The Harris gambit notwithstanding, Thursday was bound to be more exciting because it hosted four of the top runners in Biden, Vermont Sen. Bernie Sanders, Harris and South Bend, Indiana, Mayor Pete Buttigieg.  That made it riper for conflict than Wednesday which, as predicted, showcased Massachusetts Sen. Elizabeth Warren running ahead of everyone else, with former HUD Secretary Julián Castro and New Jersey Sen Cory Booker tag teaming to deliver a beat-down to former Texas Rep. Beto O’Rourke.

Spiritual author Marianne Williamson made for a fascinating guest star for entirely different reasons — more so than entrepreneur Andrew Yang, who quickly let on that he was out of his depth.

All of Thursday’s nights Democratic debate contenders had an advantage over Wednesday’s contenders in that they had a chance to watch Wednesday’s debate on NBC and MSNBC, giving them previews of each moderator’s queries and their individual style,  allowing them to figure out ways to shoehorn in their talking points and platforms in wherever they could.

Various contenders showed them what worked and what didn’t, how individuals fared on head-to-head match-ups over certain issues — immigration reform, military policy, economics. Nine of the contenders on Thursday’s stage clearly engaged in debate prep, ready for the NBC moderators’ “show of hands” issue moments, which worked better on night one than it did in the second round.  Nine of them did that.

Harris, however, came to that stage with strategy for a televised court. Her answers were prepared, but her delivery was pointed and powerful. She was locked and loaded with follow-ups to her fellow contenders’ answers, making sure never to be in a one-on-one wrestling match where she couldn’t overpower the other speaker — including “Meet the Press” host Chuck Todd.

Harris operated with a sharp awareness of the cameras and her own telegenic ability, as well as some idea of how to make the production work for her. Other players loaded up with zingers, but she laid out the night’s best at just the right moments, during one of the briefest of silences in the midst of a nine-way squabble.

“Hey guys, you know what?” she boomed, shutting them down. “America does not want to witness a food fight, they want to know how we put food on their table.” Before the resulting whooping and applause died down, she had captured the moment to deliver her answer.

Mainly, though, her objective seemed to be to wrest hold of that split screen, placing her face right beside Biden’s so that America could watch the coloring drain out of his foundation-painted face. That’s exactly what happened when she read him over his busing policy and his statements extolling the virtues of being willing to work with segregationists.

And even her way into that moment was a coup that patron saint of reality competitions Sun-Tzu would have appreciated in that she, a black woman, did not bring up racism. She waited for someone else to do it. Williamson, eager to be the voice of love and ready to be New Zealand’s favorite “girlfriend” (ugh) obliged by bringing up her support for slavery reparations. It was then that Harris took her shot, muscling into the 30 second rebuttal space by pointing out that she was the only candidate of color onstage.

“I will direct this at Vice President Biden,” Harris said evenly. “I do not believe you are a racist, and I agree with you when you commit yourself to the importance of finding common ground. But I also believe, and it’s personal, that it was hurtful to hear you talk about the reputations of two United States senators who built their reputations and career on the segregation of race in this country.”

Then she seamlessly pivoted to his history, when he was a Delaware senator, of opposing federally mandated school integration, including busing. Without breaking her gaze at him — across that split screen line, by the way — Harris launched into a story about a little girl in California who was bused to school every day as part of the second class to integrate her public schools.

Then, the body-blow: “That little girl was me. So I will tell you that on this subject, it cannot be an intellectual debate among Democrats. We have to take it seriously.”

This monologue took more than 30 seconds by the way, during which you could have heard a pin drop.

It also was smartly-timed: Harris could have made her move at any point, but in biding her time and waiting for hour two , she let the rest of the contenders wear each other out and allowed Biden to let his guard down.

Just as importantly, she also may have intentionally waited for the more inflexible trio of NBC’s Lester Holt, Savannah Guthrie and Noticiero Telemundo anchor Jose Diaz-Balart to pass their mics to Todd and MSNBC’s Rachel Maddow. Perhaps she correctly surmised that Maddow wasn’t going to stand in her way and Todd, who’s spent all week showcasing his inability to hold politicians in check, would not be able to.

The result is that Harris knocked off Uncle Joe’s mask of calm, that gentle smile for the cameras, and showed Americans what a nice guy stuffing down anger looks like. She left Biden unable to coherently defend a record that could have negatively impacted the life of a person standing a few feet away, as millions looked on. And Biden never recovered from that moment, even stumbling through an explanation that basically boiled down to a defense of states’ rights (although he did not use the term).

Not a good look.

Every campaign season features new demonstrations of television’s power to make political careers or end them. While none of the candidates has a reason to walk away from public service after these first debates, the logistics of handling 20 grandstanding egos at the same time left little chance for anyone new to stand out by using ordinary means.

This is why Warren didn’t have to mix it up with anyone on Wednesday. As one of the frontrunners, she had nothing to lose and no reason to bicker with others. She merely had to look knowledgeable, dignified and competent, which she did. Booker and Castro took some swings, but only clean ones they could land, and on a weaker O’Rourke, not on Warren.

Harris, meanwhile, allowed for Sanders’ old lefty uncle routine to take care of itself, which it did. He didn’t botch his appearance, but he probably didn’t move up in the polls either. Harris also must have suspected that America would not look kindly on a black woman beating up on a Midwestern mayor who is 37 but looks like he just made legal drinking age.

Buttigieg, meanwhile, acquitted himself well enough in handling his own uncomfortable moment, admitting failure to do enough to ensure his police department had adequate bias and de-escalation training to have prevented a South Bend cop from killing black resident Eric Logan.

Harris didn’t need to slap down him down for that or anything else — Swalwell tried, but failed — nor did she attempt to mix it up with Gillibrand and the rest of Whoville.

In taking on Biden in front of the camera — forcefully, eloquently and with the precision of a fencing champion facing off a side of beef — her objective was to prove to the audience at large that she is equipped to brawl with outsized figures, regardless of who they are, and maintain her cool.

She strived to make her the case to black Americans presumed to be in the bag for Biden, showing herself as a better representative, not to mention one who can throw down and maintain her elegance. Only time and the polls will tell if she achieved her objective.

At the end of these debates, the first round’s victories went to the strategists, not the wrestlers. And two of them are women, Warren and Harris, who used sight and sound to top advantage. Harris closed by telling Americans that she is the nominee “who has the ability to prosecute the case against four more years of Donald Trump.”

She also knows how to work the cameras and force her opponent to contend with a new script. That could be what it takes for people to finally wake up and change the channel. Then again, the season still hasn’t officially begun.