When everybody's microphone is on, even backstage, does it matter if you don't have time to listen to them? 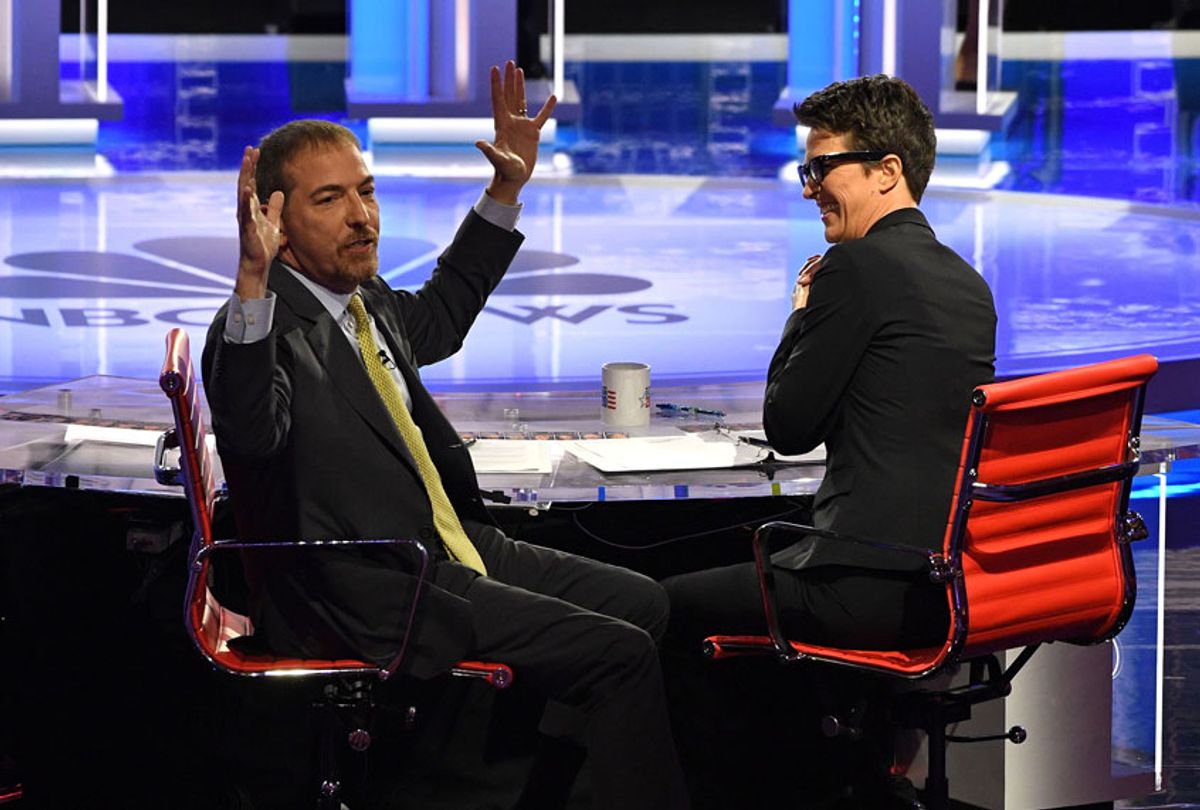 With 10 candidates onstage competing to be heard, let alone be considered viable contenders for the Democratic party’s eventual nominee, NBC likely prepared for every imaginable form of chaos on its first of two nights of candidate debates. Crosstalk? Naturally. Fisticuffs? Anything's possible in 2019.

But it was the most basic of snafus that was the network’s undoing: the accidental offstage hot microphone.

Todd was in the midst of sensitive question about gun control directed at Massachusetts Sen. Elizabeth Warren when it became apparent that Guthrie’s and Holt’s microphones were still picking up their conversation.

So instead of hearing Warren’s policy on gun control, everyone at home and in the seats of Miami’s Adrienne Arsht Center for the Performing Arts could listen to the previous moderators saying, "I need to go to the restroom" (thank goodness we didn't actually hear the person go to the restroom) and "Where’s my binder?...Someone's got my binder."

“We are hearing our colleague’s audio,” Todd said as Maddow called for the control room to cut their mics — which didn’t happen.

“We prepared for everything except for this!” Maddow joked, before Todd, after a second failed attempt to launch into questions, threw to commercial.

Live TV contains an element of unpredictability, which is part of what makes it so exciting. Regardless of how amply a broadcaster can prepare, as Maddow said, there’s no accounting for technical difficulties. And even though calling NBC’s audio issues a disaster makes for a clickable headline, what happened was hardly that. Was it embarrassing? Sure.

NBC will recover, and night two of the first Democratic presidential debates will almost assuredly go more smoothly than night one. For a few of the candidates, however, that attention-stealing gaffe could not have happened at a worse time.

A 10-way policy bout with live mics all around is not an ideal scenario for any candidate who isn’t polling better than 3%, which describes everybody on Wednesday night’s stage other than Warren and Former Rep. Beto O’Rourke from Texas. For a guy like Ohio congressman Tim Ryan, whose campaign slogan might as well be, “Who?” Wednesday night’s debate was lethal.

Getting your message across, even if it’s just “this is who I am,” is tough at the best of times and nearly impossible when tasked with slipping in between nine other people without seeming overbearing or, that favorite word of female politicians, shrill. Wresting the audience’s attention back to you when it’s still reeling from a technical goof makes that effort even harder.

When you think about it, NBC's hot mic mistake was evocative of the first debate itself. Ten people were on that stage, competing for a few slim opportunities to stand out and make themselves known to a confused nation, if only to elevate their profiles by a point or two. This was democracy’s version of a reality competition’s audition rounds, except with few opportunities for solo riffs and lots more mic battling. And some were better equipped for this climate than others.

Minnesota Sen. Amy Klobuchar was thrust into contention by way of her show of calm command in the face of a combative, red-faced eventual Supreme Court Justice Brett Kavanaugh. But there’s a world of difference between the calm mic of a Senate room hearing and a pressurized debate on national television. Klobuchar came to the stage with a quiver full of zingers and shot as many of them as often as possible, although her one-liner litmus test on gun control of "Would this hurt my Uncle Dick in the deer stand?” came off as more stilted than folksy. On the other hand, her comment about not conducting foreign policy “in our bathrobe at 5 o’clock in the morning” was a quality burn on you-know-who, not that it matters.

Former Housing and Urban Development Secretary Julián Castro is an Obama-era holdover who has experience in laying out policy, as does New York Mayor Bill de Blasio, obviously. New Jersey Sen. Cory Booker is working with lower poll results than the frontrunners, but he has name recognition going for him.

As for Ryan, Hawaii Rep. Tulsi Gabbard, Washington Gov. Jay Inslee and former Maryland Rep. John Delaney, at least we know that they exist and can hope that they soon realize this race is not for them.

However, Wednesday night’s spectacle, like Thursday's, is the best shot the also-rans have to make their mark. But their main obstacle isn’t obscurity, or even harsh time restrictions.

It’s the sobering truth that on some level, the audience is going to want proof that the Democrat’s eventual nominee will not only offer a better way forward by way of substantive policies on multiple fronts, but that they’re also an effective brawler.

That’s a very difficult sell on a stage with nine other people unless you happen to be Warren, a candidate who has campaigned so effectively prior to these debates that she has very little to prove right now.

Hence, while Warren did tussle with a couple of rivals, she mostly utilized her mic time to sell herself as a scholarly champion of the average person and an anti-corruption warrior. Working dramatic pauses and an inspirational speaker’s melodic cadence, Warren talked a lot about fighting without getting unnecessarily embroiled in the evening’s multiway melees. Her time to raise her voice will come later; besides, she’ll need to save her strength for taking on Bernie Sanders.

Some of the underdogs have more live microphone experience than others, however. To wit: Booker, who has worked his share of rooms, not all of them friendly, ended up being the candidate who spoke the highest number of words and for the most total minutes , all of which matters in a 10-way debate stuffed into a two-hour time crunch.

The amount of time a contender spent talking doesn’t necessarily mean that time was well-spent, however.

O’Rourke claimed second place in the time-capture contest, with Warren and Castro bringing up third and fourth, and the immediate verdict is that Castro cleaned Beto’s clock. Even though the Texas golden boy opened with a statement in Spanish, earning epic side-eye from Booker, he looked flustered on stage and nervous next to Warren and Castro, who remained cool even when he and O’Rourke locked in a skirmish over immigration reform.

Sadly, the candidates were also put in a situation in which they competed for time with the moderators themselves, creating something of a too-many-cooks-in-the-kitchen situation. Holt, Guthrie and Diaz-Balart were a more effective team than the Maddow/Todd combo, and the entire broadcast would have been improved without Todd’s presence at all.

Todd spoke only four fewer words than Warren and more than each of the remaining seven candidates, and none of his blather proved to be more memorable than NBC’s audio error.

On the whole, though, those prepared mic drops mattered a whole lot less than how well various candidates handled their time and how they came off during the debate’s inevitable sparring matches.

Castro and Booker made the most of their limited time by aggressively pressing what advantages their individual experiences in government and their personal relationships to societal shifts gives them over other candidates. And when they weren’t duking it out with one another, Castro in particularly made great sport of knocking down O’Rourke a few pegs (although the former Texas Congressman did a fairly stellar job of whiffing his performance all by himself). If Wednesday were a contest for mic masters, the top finishers had to be Castro and Booker.

Contenders also generally displayed an awareness that breaking out into a multi-voiced brawl was not going to help their image. When Ryan and Delaney talked over other candidates in attempt to get a word in edgewise they came off sounding like America’s angry uncles. De Blasio’s passion somehow worked for him even though he remained a long shot at the end of the night. And measured clarity didn’t quite work for Gabbard, who came off as sleepy and robotic — easy pickings.

Winnowing down the field prior to a televised debate would have been more helpful for voters who want to consider substantive discussion of issues as opposed to listening for the louder voice, not that it matters. The rules allow anyone registering at least 1% of support or more in at least three qualifying polls to have their say on a podium, which is as fair as it is messy and not particularly useful when it comes to allowing candidates to fully articulate their positions, let alone breathe.

Did Wednesday provide any clues as to who might turn out to be the eventual nominee? Of course not. Thursday probably won’t either — the party’s convention is still more than a year away, and Castro’s emergence proves how much we don’t know about who the truly viable candidates might be.

And though Wednesday’s too much sound, too little fury round-robin never quite caught fire, it may serve the purpose of booting a few passengers out of the clown car to make the field of contenders manageable. We’ll have a better notion of how effective these debates are as elimination rounds in the coming weeks, but at least all comers had their shot at making a first impression, whether they chose to make the most of it or not. NBC, for its part, has to be a little more prepared for Thursday than it thought it was on Wednesday.