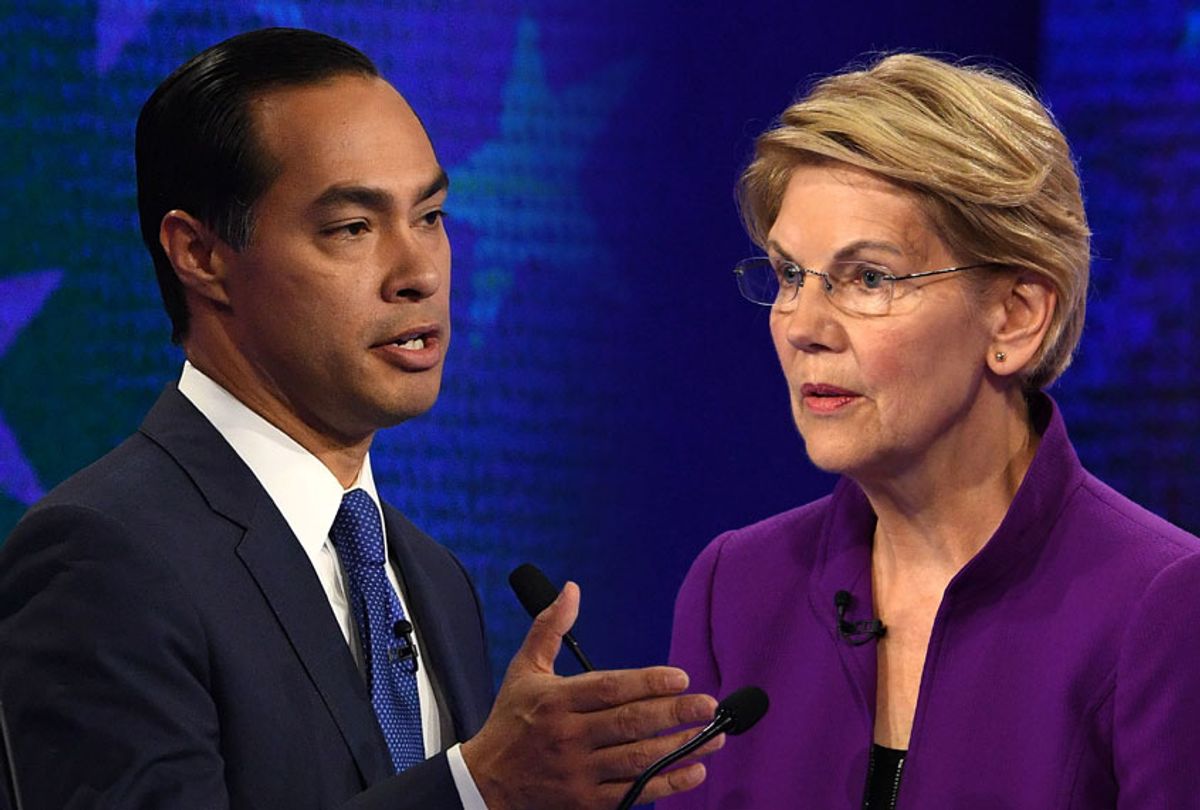 With two dozen candidates announced and the possibility of ousting Donald Trump in the 2020 elections on voters' brains, the anticipation for the first of many Democratic primary debates, held in Miami on Wednesday night, was at a high pitch. But that can only be matched by the cynicism of our era. It was worth wondering whether, despite all the hype, this debate could even matter?

Good news, for once: The answer is yes.

Because most voters just vote for whoever their party nominates, debates don't matter "once we get to the general," University of Wisconsin political science professor Kenneth Mayer recently told Salon in a video interview.

"But in primaries, they actually can have a somewhat larger effect," because voter opinion hasn't hardened and candidates who don't have national name recognition "might be able to use this to introduce themselves to a national audience."

The big question going into Wednesday night was whether Sen. Elizabeth Warren,  who has been steadily gaining in the polls, would be able to impress audiences who might not have known much about her before this debate. As many expected, she opened strong, knocking away the idea that Americans like the economy the way it is by asking who "this economy is really working for" and answering the question — the rich are getting richer, but leaving everyone else behind.

For the first half-hour or so, Warren appeared to dominate, reacting to every question as if she was being presented with a birthday cake.  But for some reason — perhaps Rep. Tulsi Gabbard's sister complaining on Twitter — the moderators pulled back, giving more time to other candidates, including D-listers like Rep. John Delaney, and far less time to Warren.

The move may have a gesture toward fairness, but the long Warren-free sections of the debate also turned out to be the most boring and patience-trying, even for the most devoted political geeks. The life she gave the debate, even as she often came across as over-eager, is a hint to why Warren has been picking up steam on the campaign trail: Audiences who give her a chance tend to come away liking her.

Still, two other candidates more than accomplished what they set out to do in the debate, which was simply to make an impression on voters despite the dense primary field: Sen. Cory Booker and former HUD Secretary Julián Castro.

Booker managed to snag his spotlight time through sheer tenacity, seizing every opportunity to interrupt and push his way into answering questions asked of other people. Somehow, he made it work, even as every other interrupting man on the stage came across as annoying and arrogant. His earnestness as a politician, which sometimes tends to backfire, worked for him in the debate setting, taking the edge off his interruptions by the sheer force of how much he does, after his own unapologetic dork fashion, really seem to care.

Castro, on the other hand, just stood out on simple merit. (Which I have to point out, I predicted would happen.) He first started to shine on the topic of immigration, where he accused Donald Trump of "playing games" with immigrants' lives and declaring that the United States should "not criminalize desperation." But he continued to impress throughout the debate, not just giving sharp and compassionate answers, but ending the night with an eloquent bit of Spanish that made Rep. Beto O'Rourke's and Booker's previous attempts to speak the language sound even more cringeworthy.

No wonder, then, that Castro came right after Warren in the Twitter "trending topics" list centered on the debate. But that might mainly reflect the fact that he kept tickling social justice activists in the sweet spots — bringing up trans rights, using the term "reproductive justice," listing the names of victims of police violence — and may not have a reach beyond that crowd. (Of which I consider myself a member, so no shade intended.)

The losers of the night were numerous, as to be expected in a year when everyone tall enough to ride the roller coaster has tried their hand at running for president.

New York Mayor Bill de Blasio tried to run hard to the left, railing at Democrats for not embracing higher taxes and more attacks on Wall Street. He had some decent moments, but ultimately couldn't compete with the smarter-sounding Warren on these issues.

Sen. Amy Klobuchar tried a clearly pre-planned zinger, trying to school male Democrats for talking about reproductive rights issues. While that definitely drew some attention, it was also a pretty low tactic, as none of the men on stage were being particularly sexist and many have strong  pro-choice bona fides.

Rep. Tulsi Gabbard sounded normal all night, which was a big win for her, even if she got dragged into a lengthy tiff with Rep. Tim Ryan about the pace of withdrawing troops from Afghanistan. As a former Army officer who served in Iraq, Gabbard has some authority on this issue.

Everyone else was utterly unmemorable, especially Rep. Beto O'Rourke, whose choice to answer a question in Spanish was both awkward and literally the only thing that people will remember about him. The entire evening, in fact, showcased why perhaps Castro was the young Texas Democrat who deserved all that you-are-the-next-Kennedy love that O'Rourke got showered with earlier this year.

No doubt pundits are saying Donald Trump was mentioned very little, but in fact that wasn't entirely true. He was criticized quite a bit, particularly on the issue of immigration. It's just that he looms so large in the political imagination that an appropriate amount of attention seems anemic.

The biggest takeaway from the night is that about half the candidates should just drop out already, if only so Warren gets to talk more and the networks don't see their debate ratings tank. Sadly, that likely won't happen, due to the nature of ego in politics. Instead, everyone is going to think that he or she the next Julián Castro, and these debates will continue to be boring until the Democratic Party starts forcibly kicking the stragglers to the curb.