Graham: "Klobuchar should apologize to Kavanaugh and his family for being part of a smear campaign"

In an interview with Hannity, Graham predicted that Collins and Murkowski — two pivotal GOP votes — would confirm 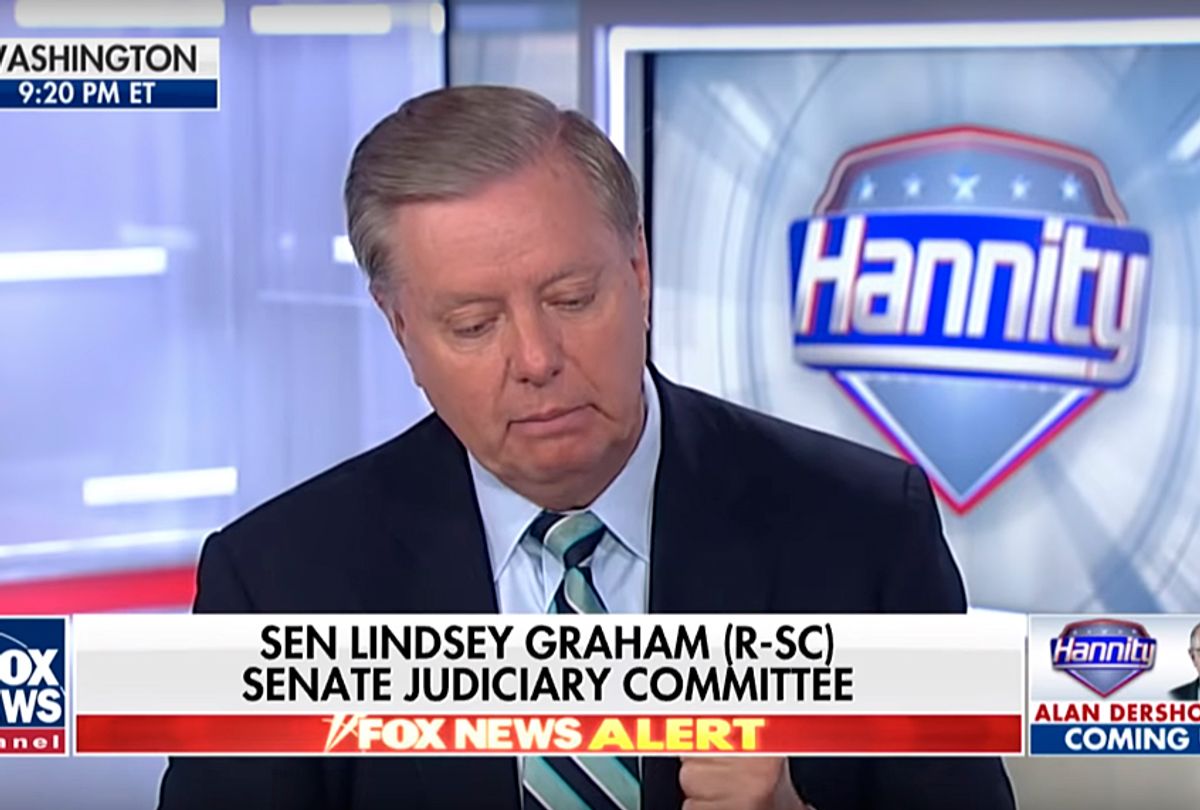 Senator Lindsey Graham (R-S.C.) urged his Democratic colleague Senator Amy Klobuchar of Minnesota to apologize to embattled Supreme Court hopeful Brett Kavanaugh, who is currently under intense scrutiny over multiple allegations of sexual misconduct, for her alleged participation in a "smear campaign" against the federal judge.

During a Tuesday night appearance on Sean Hannity's Fox News program, Graham alluded to Klobuchar's combative back-and-forth with Kavanaugh during last week's hearing. He explained that the high court nominee had apologized for "snapping" at the Democratic senator, whose father has struggled with alcoholism, after she asked him if he had ever blacked out from drinking. "I don't know, have you?" Kavanaugh retorted at the time.

Kavanaugh appeared before the Senate Judiciary Committee last Thursday to respond to the sexual misconduct allegations raised against him by Dr. Christine Blasey Ford, who testified to the panel that she was "100 percent" certain that the high court nominee had attempted to rape her in the 1980s.

"Here's what I think," Graham told Hannity. "Amy Klobuchar should apologize to Kavanaugh and his family for being part of a smear campaign that I haven't seen for over 20 years of politics."

Later in the interview, Graham predicted that Sen. Susan Collins (R-ME) and Lisa Murkowski (R-Ark.) — two lawmakers who have played a pivotal role in the nomination battle — would ultimately vote "yes" on Kavanaugh soon after the FBI completes its expanded investigation into the sexual assault allegations against him.

"I'm confident both of them — if there's no change, if the FBI learns nothing new about the Ford allegations or legitimacy to Ramirez — they're going to vote for Kavanaugh," Graham said. "Because we've done everything within reason."

Graham added that he "hopes" that Sen. Jeff Flake (R-Ariz.) — who has also emerged as a key figure in the fight over Kavanaugh's nomination — would also vote to confirm Kavanaugh. The Arizona Senator said Tuesday that he believes America "can't have" Kavanaugh's "sharp and partisan" temperament on the Supreme Court. On Monday, Flake similarly told reporters that, if Kavanaugh lied to the Senate Judiciary Committee, that would be "disqualifying."

Earlier this week, Graham called for an investigation into the Senate Democrats who have drawn attention to the sexual misconduct allegations against Kavanaugh. "We're going to do a wholesale and full-scale investigation of what I think was a despicable process," Graham said Sunday on ABC's "The Week." When pressed for details, Graham said he wanted to learn "who betrayed Dr. Ford's trust, who in Feinstein's office recommended Katz as a lawyer, why did Ms. Ford not know that the committee was willing to go to California."

Graham reiterated these remarks during an appearance on Maria Bartiromo's Fox Business show. "I've known Brett for twenty years. He’s gone through six FBI background investigations. He has supported more women to be his law clerks than any circuit judge in the country,” Graham told Bartiromo. "He's highly respected. Not one hint of impropriety. And they tried to destroy his life."

"I voted for Sotomayor and Kagan. This was about delaying the hearing, keeping the seat open past the midterms, so it could be filled in 2020. There are no rules when it comes to Brett Kavanaugh," Graham added. "I honored Obama’s election. He got to pick Sotomayor and Kagan. They don’t want to honor President Trump’s ability to pick a fine man."

Kavanaugh has categorically denied the sexual misconduct allegations raised against him by Ford. He has also denied an allegation by Deborah Ramirez, a classmate of his at Yale University, as well as an accusation from a third women, Julie Swetnick, who has alleged she was the victim of a gang rape at which she claims Kavanaugh was present. He has also vehemently refuted claims that he often drank to excess or had memory lapses due to alcohol consumption.

At this point, Kavanaugh's lifetime appointment to the high court remains in flux. What federal investigators will unearth is anyone's guess.