"His testimony was powerful, honest, and riveting. ... The Senate must vote!" Trump tweeted 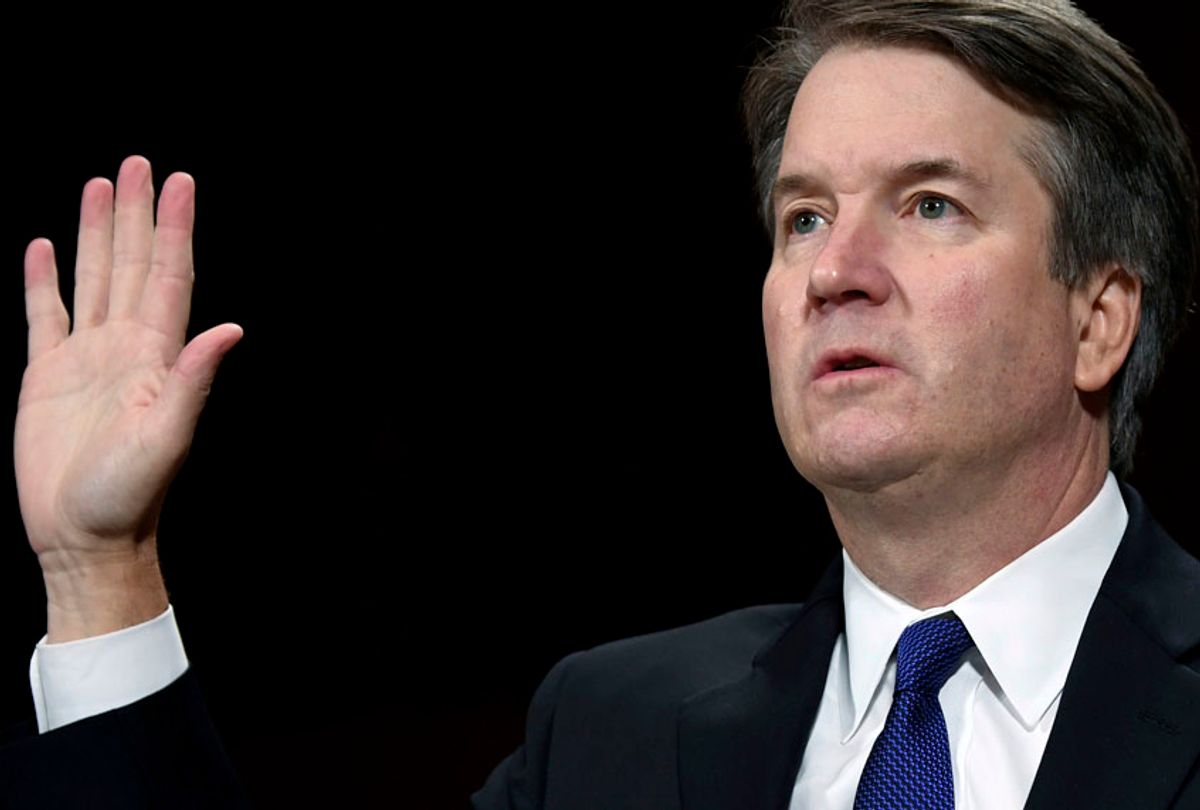 President Donald Trump praised his Supreme Court nominee Brett Kavanaugh after he appeared Thursday before the Senate Judiciary Committee to respond to the sexual misconduct allegations raised against him by Christine Blasey Ford.

"Judge Kavanaugh showed America exactly why I nominated him," Trump tweeted as soon as the hearing was over. "His testimony was powerful, honest, and riveting. Democrats’ search and destroy strategy is disgraceful and this process has been a total sham and effort to delay, obstruct, and resist. The Senate must vote!"

In his opening statement, an emotional Kavanaugh began, "Eleven days ago, Dr. Ford publicly accused me of committing a serious wrong more than 36 years ago when we were both in high school. I denied the allegation immediately, unequivocally and categorically. The next day, I told this Committee that I wanted to testify as soon as possible, under oath, to clear my name."

"Over the past few days, other false and uncorroborated accusations have been aired. There has been a frenzy to come up with something — anything, no matter how far-fetched or odious — that will block a vote on my nomination. These are last minute smears — pure and simple. They debase our public discourse," he continued. "And the consequences extend beyond any one nomination. Such grotesque and obvious character assassination — if allowed to succeed — will dissuade competent and good people of all political persuasions from serving our country."

Kavanaugh also asserted that he "will not be intimidated into withdrawing from this process."

"This effort to destroy my good name will not drive me out. The vile threats of violence against my family will not drive me out," he added. "I am here this morning to answer these allegations and to tell the truth. And the truth is that I have never sexually assaulted anyone — not in high school, not in college, not ever."

"My family and my name have been totally and permanently destroyed by vicious and false additional accusations," Kavanaugh continued.

When asked by Sen. Dianne Feinstein (D-Calif.), the ranking member of the committee, why he did not want an FBI investigation launched into the allegation, Kavanaugh dodged her question. "I wanted a hearing the next day," he responded. Later in the testimony, he argued that the hearing was sprung on him at the last minute.

Earlier this week, the New York Times reported that Kavanaugh and several other football players described themselves as "Renate Alumni" in his high school yearbook — an apparently vulgar reference to Renate Schroeder Dolphin, who attended a nearby Catholic girls high school at the time.

When asked about the "Renate" reference during his Senate testimony, Kavanaugh said it was a term of endearment intended to show that she "that she was one of us." His lawyer, however, told the newspaper that Dolphin and Kavanaugh were friends in high school and "shared a brief kiss" after a high school event. Dolphin said that she had never kissed Kavanaugh.

Kavanaugh also said he did not watch Ford's earlier testimony to the Senate Judiciary Committee, after Sen. Kamala Harris (D-Calif.) asked him if he had. Kavanaugh said he intended to, but instead spent time preparing for his own testimony. Earlier in the day, The Wall Street Journal reported that Kavanaugh was watching the testimony from a monitor in another room in the Senate building.

His remarks follow the testimony of Ford, the university professor who has accused Kavanaugh of attempted rape in the 1980s. Earlier in the day, she testified to the Senate Judiciary panel that she was "100 percent" certain that Kavanaugh had assaulted her.

The make-or-break-it hearing comes a day before the committee is slated to vote on Kavanaugh's nomination, as scheduled by Chairman Chuck Grassley (R-Iowa). Senate Republican leaders eye a full Senate vote on the nomination by early next week, aiming for Kavanaugh to be confirmed and sworn in as a justice soon after the high court kicks off its new term Monday. Kavanaugh was nominated by Trump to the fill the seat vacated by Justice Anthony Kennedy, who was a key swing vote on the high court.

Senate Republicans — desperate to avoid the bad optics of an all-male panel interrogating an alleged sexual assault victim — outsourced their questions to a female lawyer who grilled Ford on their behalf. The outside litigator, Rachel Mitchell, is a sex crime prosecutor from Arizona who has pushed for changes in the courtroom to comfort and serve victims of assault. She stood in for Republicans during Thursday's testimony.

During Thursday's hearing, Senate Republicans accused Sen. Feinstein of leaking the letter with Ford's accusations against Kavanaugh to the press. Feinstein said neither she nor her staff shared the letter with the press. In addition, The Intercept's Ryan Grim, who broke the story that Feinstein had the initial letter, wrote on Twitter that the Senator's staff did not leak the letter to news outlet.

Republicans also criticized Feinstein over the timing of the letter. Conservative lawmakers slammed the ranking member for releasing Ford's letter and also for not releasing it quickly enough.

Ford told The Washington Post earlier this month that Kavanaugh thrust her in a bedroom at a party when they were both in high school, locked the door, pinned her to the bed, groped her over her clothes, ground his body against hers and put his hand over her mouth to stop her from screaming.

A second sexual assault allegation was detailed Sunday by a former Yale University classmate of Kavanaugh's, Deborah Ramirez, who claimed that Kavanaugh exposed himself to her and thrust his penis in her face at a party while they were both freshmen at the university. Ramirez described the alleged incident to The New Yorker in an article published on Sunday. Michael Avenatti, the attorney representing adult-film actress Stormy Daniels in her lawsuits against President Donald Trump and his former lawyer Michael Cohen, revealed Wednesday that he was representing Julie Swetnick, a third accuser.

Swetnick, who has held federal government posts at the Internal Revenue Service, the U.S. Mint and the Treasury Department, has alleged that Kavanaugh and his high school friend Mark Judge drugged and gang-raped multiple women at parties during their high school years — and that she once became a victim herself.

In addition, the Senate inquired about at least one additional allegation of misconduct against Kavanaugh – an incident that allegedly occurred in 1998 – NBC News reported Wednesday.

Kavanaugh has vehemently denied all of the accusations.

The Senate is set to vote tomorrow — and Republican Senators Lisa Murkowski of Alaska, Jeff Flake of Arizona and Susan Collins of Maine have still not announced how they will vote on Kavanaugh's confirmation. There are also questions around how Democratic Senators Joe Donnelly of Indiana, Heidi Heitkamp of North Dakota and Joe Manchin of West Virginia will vote; the three of them previously voted to confirm Neil Gorsuch, Trump's first Supreme Court nominee, last year.

As Salon's Matthew Rozsa previously reported, "Since Republicans currently control the Senate with a 51-49 majority, it would presumably take just two Republican senators to thwart Kavanaugh's confirmation. (That's assuming that all 47 Democrats, plus the two independent senators, vote against him.)"

If Kavanaugh gets 50 votes, it is possible Vice President Mike Pence will be called in to cast the tie-breaking vote, and Republicans will be able to confirm Kavanaugh to the Supreme Court.