Woman who signed letter supporting Kavanaugh finds out he degraded her in school yearbook: report

"I pray their daughters are never treated this way," Renate Schroeder Dolphin responds 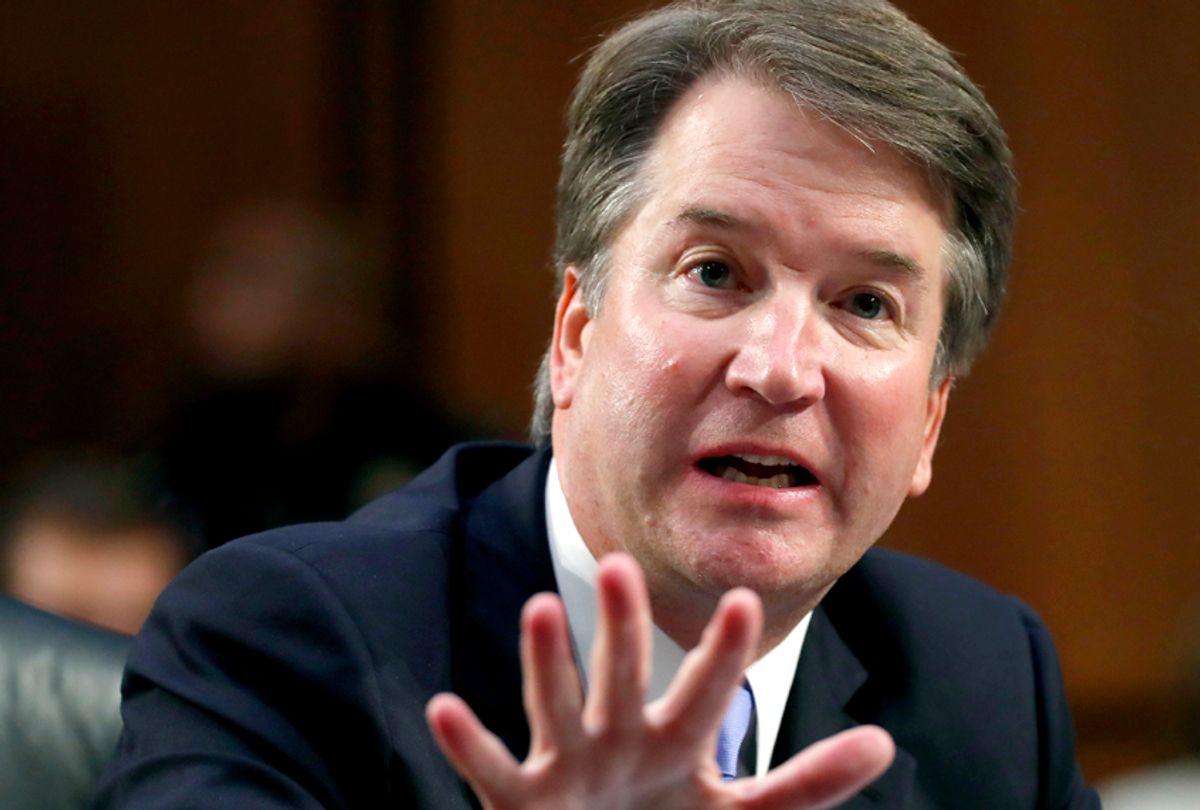 Renate Schroeder Dolphin, a woman who knew President Donald Trump's Supreme Court nominee Brett Kavanaugh during his high school years, is denouncing a "horrible, hurtful and simply untrue" insinuation after The New York Times revealed that her name had been referenced several times in his high school yearbook.

The newspaper reported on Monday that Kavanaugh and several other football players described themselves as "Renate Alumni" in Georgetown Preparatory School's 1983 yearbook, in an apparently vulgar reference to Dolphin, who attended a nearby Catholic girls high school at the time.

Dolphin had joined 64 other women who signed a letter to the Senate Judiciary Committee in support of Kavanaugh after he was accused of attempted rape in the 1980s earlier this month, writing that they knew the embattled appellate court judge during their teenage years to be a "good person" who "has always treated women with decency and respect."

She told The Times she was stunned by the revelations that the word "Renate" had appeared at least 14 times in the 1983 yearbook.

"I learned about these yearbook pages only a few days ago," Dolphin said. "I don't know what 'Renate Alumnus' actually means. I can't begin to comprehend what goes through the minds of 17-year-old boys who write such things, but the insinuation is horrible, hurtful and simply untrue."

"I pray their daughters are never treated this way," she added. "I will have no further comment."

Dolphin wasn't aware of the "Renate" yearbook references about herself when she signed the letter to the Senate Judiciary Committee in support of Kavanaugh, The Times reports.

Kavanaugh's lawyer, Alexandra Walsh, told the newspaper that Dolphin and Kavanaugh were friends in high school and "shared a brief kiss" after a high school event. Dolphin, however, said that she had never kissed Kavanaugh.

"I think Brett must have me confused with someone else, because I never kissed him," she told the newspaper through her lawyer.

Sean Hagan, who was a Georgetown Prep student at the time, told The Times that Kavanaugh and his teammates "were very disrespectful, at least verbally, with Renate," adding, "I can't express how disgusted I am with them, then and now."

Hagan and another classmate, who requested anonymity, told the newspaper that the mentions of Dolphin were part of the football players' boasting about their unsubstantiated sexual conquests.

Hagan said Dolphin "should be offended," and told The Times he was "completely astounded" when he saw she had signed the letter in defense of Kavanaugh.

Four of the players who were pictured with Judge Kavanaugh in a photo captioned "Renate Alumni" told The Times the "Renate" references "were intended to allude to innocent dates or dance partners" and that they had "never bragged about" sexual contact with Dolphin.

Michael Walsh, another student at Georgetown Prep student, also wrote "Renate Alumnus" on his yearbook page, The Times reports. He also included a short poem, "You need a date / and it's getting late / so don't hesitate / to call Renate."

Walsh was one of many Georgetown Prep alumni who signed a letter attesting to Kavanaugh's "sharp intellectual ability, affable nature, and a practical and fair approach devoid of partisan purpose."

Dolphin was aware Kavanaugh's friends were reciting that poem, a person familiar with her thinking told The Times. She reportedly told the football players that she found it offensive and asked them to stop.

The 1983 yearbook page also lists Kavanaugh as the "treasurer" of the "Keg City Club."

Kavanaugh's teenage years have come under intense scrutiny after Dr. Christine Blasey Ford, a university professor, accused him of attempted rape in the 1980s.

Since then, a second allegation was detailed by a former Yale University classmate of Kavanaugh's, Deborah Ramirez, who claims Kavanaugh exposed himself to her and thrust his penis in her face at a party while they were both freshmen at the university.

For his part, Kavanaugh has categorically denied the accusations from both women.

In addition, Michael Avenatti, the attorney representing adult film star Stormy Daniels in her lawsuits against President Trump and his former lawyer Michael Cohen, recently alluded to a third client on Twitter, writing that he represents a women with "credible information regarding Judge Kavanaugh."

Avenatti told The Hill on Monday that he expects his new client to go public with her sexual misconduct allegation against Kavanaugh in an on-camera interview within the next 48 hours. "We anticipate that that is what is going to occur," he said.

Kavanaugh attempted to defend himself against the accusations during a Monday appearance on Fox News by insisting that he did not lose his virginity until many years after high school and thereafter — a defense that does not disprove any of accusations of sexual misconduct made against him.