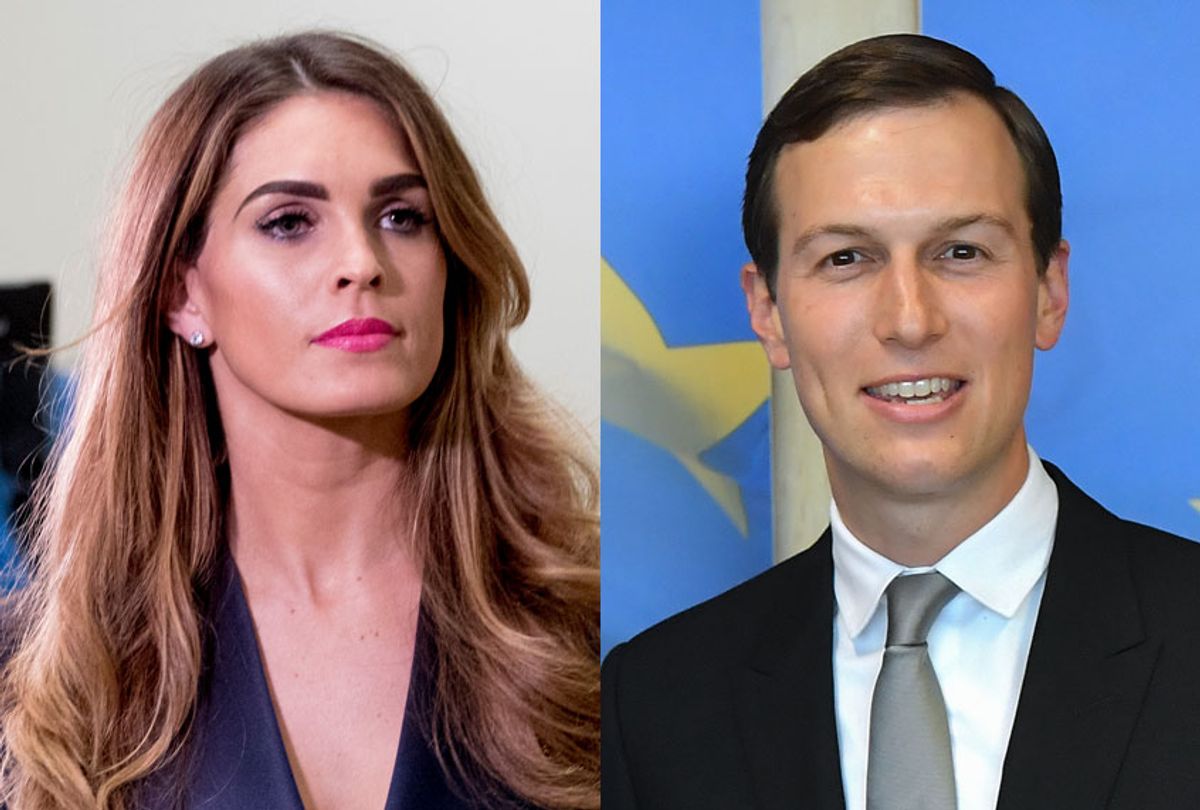 Former White House communications director and longtime Trump aide Hope Hicks appeared to suggest that Trump son-in-law and adviser Jared Kushner lied about the campaign’s contacts with Russian officials during her testimony in a closed-door hearing before the House Judiciary Committee last week.

Hicks refused to answer the committee’s questions more than 150 times, according to a transcript released the following day. But one exchange first flagged in a Mother Jones article appeared to implicate Kushner in a “cover-up” of the campaign’s interactions with Russians.

Two days after Trump’s election win, Russian Deputy Foreign Minister Sergei Ryabkov told a Russian news agency that “there were contacts” between the Kremlin and the Trump campaign during the election. Hicks denied the report at the time, telling the Associated Press that “it never happened” and that “there was no communication between the campaign and any foreign entity during the campaign.”

Special counsel Robert Mueller’s report showed that was false. The report said that investigators “established multiple links between Trump Campaign officials and individuals tied to the Russian government. Those links included Russian offers of assistance to the Campaign. In some instances, the Campaign was receptive to the offer, while in other instances the Campaign officials shied away.”

In her testimony to the Judiciary Committee last week, Hicks told Rep. Madeleine Dean, D-Pa., that she was “very surprised” to learn that the Trump team had more than 100 contacts with Russia, though some researchers have found nearly 300 contacts between Trump’s campaign and the Russians.

Hicks claimed that she did not knowingly lie to the AP, telling Dean that “senior officials” had told her “there were no contacts” with Russians before she issued the denial.

“And who was it that told you there were no contacts?” Dean asked.

Though Hicks told Dean that she asked about the contacts before issuing the denial, Hicks apparently told Mueller’s team that it was only after she issued the statement that she talked to Miller, Kellyanne Conway, Stephen Miller, and “probably Kushner and [Steve] Bannon,” according to Mueller’s report.

Regardless of the timeline, if Hicks’ testimony is accurate Kushner appears to have knowingly lied — since he himself was involved in several contacts with the Russians.

By that time, Kushner had long since met with Russian attorney Natalia Veselnitskaya in a June 2016 meeting arranged by Donald Trump Jr. at Trump Tower to obtain “dirt” on Hillary Clinton.

Even before that meeting, Kushner had received an email telling him that the meeting “is obviously very high level and sensitive information but is part of Russia and its government’s support for Mr. Trump,” according to documents obtained by the New York Times.

Kushner also knew that Russian central bank official Alexander Torshin (who was apparently the handler of convicted Russian spy Maria Butina) had reached out to the campaign with a “Russian backdoor overture,” as the New York Times reported in 2017. Though that meeting never happened, Torshin later met Donald Trump Jr. at an NRA meeting in Kentucky during the campaign.

If Hicks’ testimony is accurate, “that would mean that Kushner misled her and that he bears responsibility for one of the biggest lies Trump and company told,” David Corn wrote at Mother Jones. “Hicks’ account suggests that Kushner, in the wake of Trump’s victory, tried to prevent the truth from emerging and helped fashion one of the earliest expressions of the Trump team’s false and misleading cover story.”