I was wrong about "Spider-Man: Into the Spider-Verse"

I didn't love the animated feature when it came out in theaters last year, but I do now. Here's why 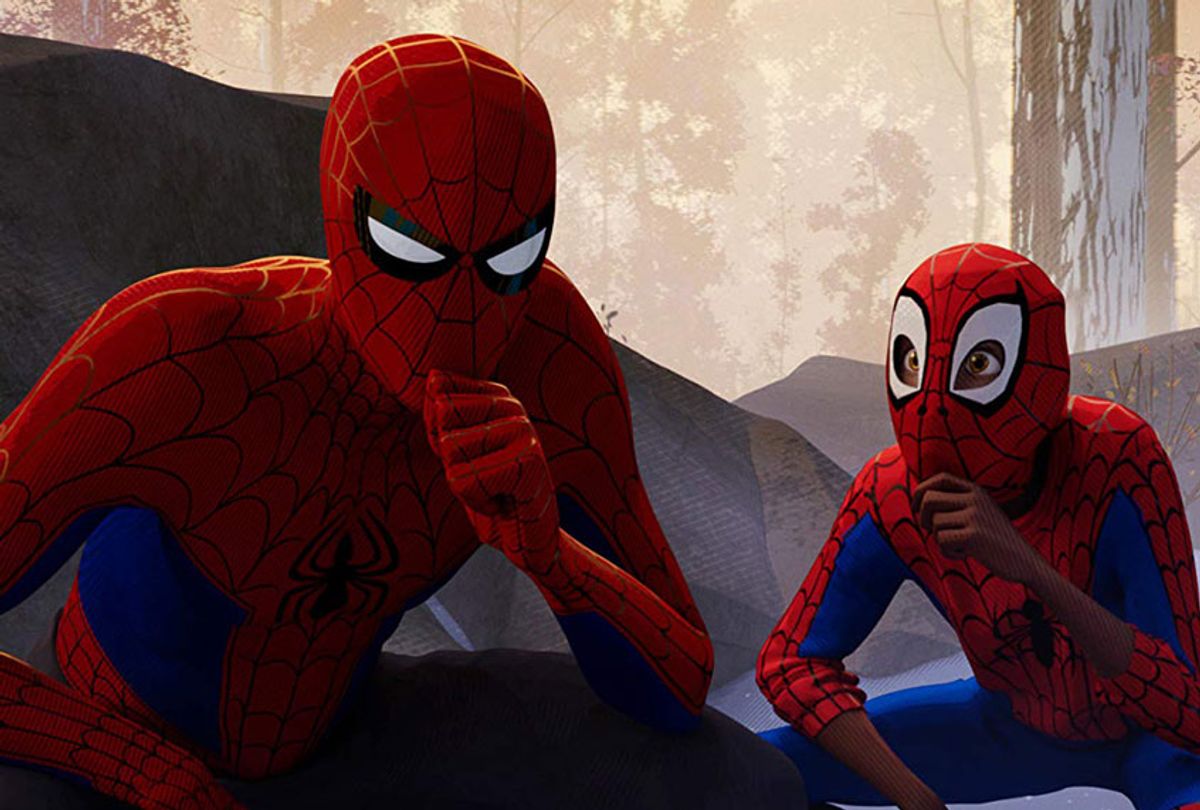 One of the greatest moments of my life was when I started writing movie reviews. Growing up I regularly read the reviews of the iconic Roger Ebert, whose opinions on movies read more like verdicts than opinions. In my 20s, after discovering Rotten Tomatoes, I moved on to other critics (including Salon's own Andrew O'Hehir) and became familiar with the different styles of film criticism, the different ways that one can deconstruct the complex art known as cinema and in so doing create analysis, commentary and even works of literature that will be read by countless people.

Yet with great power comes great responsibility. And one such responsibility, as a critic, is to admit when you've made a mistake. Hence this revision of my 2018 review for "Spider-Man: Into the Spider-Verse," on the occasion of the movie's recent premiere on Netflix, as well as the upcoming theatrical release of "Spider-Man: Far From Home" next week.

I've actually been planning on writing this for a while, though, ever since I happened to rewatch "Spider-Man: Into the Spider-Verse" and was moved to tears. In my initial review I found the movie to be soulless despite its lush animation (which I praised), quoting Ebert's review for the 1989 "Batman" movie when he wrote that although it had "one of the most distinctive and atmospheric places I've seen in the movies," it was "a shame something more memorable doesn't happen there." Many people urged me to give it a second chance, and when I did I realized that something quite memorable had happened there. This prompted me to do two things: Analyze what made this movie so great, and analyze what had caused me to have such a dim view of it in the first place.

Like any great "Spider-Man" movie, "Spider-Man: Into the Spider-Verse" works because of its complex and relatable protagonists and memorable villains. The neat gimmick in this movie is that, by having multiple iterations of Spider-Man appear from a number of alternate universes, audiences are able to see different interpretations on the same basic character themes. Miles Morales (Shameik Moore) is the closest to the Spider-Man archetype we normally see in the first film in a "Spider-Man" series: He is an intelligent, idealistic teenager with a puckish streak and an endearing awe at his newfound superhero status. There are crucial differences between Morales and other traditional Spider-Men, of course, namely in that his family is still alive, he inherits his Spider-Man mantle by having it passed on to him by a murdered previous Spider-Man and he isn't white (Morales is African American and Puerto Rican). Morales makes the qualities one normally associates with Spider-Man seem fresh while remaining true to the character's original heart.

In the film he is contrasted with Peter B. Parker (Jake Johnson), an obese and chronically depressed 38-year-old Spider-Man whose life has fallen apart and feels like an abject failure. Having the slovenly, borderline apathetic Parker serve as a mentor to the plucky Morales was a brilliant touch by the filmmakers (the directors include Bob Persichetti, Peter Ramsey and Rodney Rothman; the writers were Phil Lord and Rothman). Not only did it upend the traditional mentor-mentee dynamic — you know, where the mentor is practically infallible and the mentee needs to shut up and listen to him — but it also provided a different kind of avatar for audience members to relate to. As I observed when analyzing the character of Fat Thor (now known as Bro Thor) in "Avengers: Endgame," there is something refreshing about seeing superheroes who have the same flaws as many of their adult fans. Not everyone who watches superhero movies is idealistic and youthful like Morales; some, like this version's Parker, are rapidly approaching middle age, struggling with body insecurities, and sense that their lives have spiraled out of control and are weighed down by a sense of failure. One of the movie's most touching moments is when it becomes clear that Morales has just as much to teach Parker as Parker does Morales precisely because Morales is a hopeful kid who can remind Parker of the person he used to be — and, deep down, still is.

While the Morales and Parker versions of Spider-Man are the only ones explored in depth, there are other great Spider-Man iterations that are used quite well for comedy. They include Gwen Stacy/Spider-Woman (Hailee Stenfeld), Peni Parker/SP//dr (Kimiko Glenn), Peter Parker/Spider-Man Noir (Nicolas Cage) and — the stand-out of the group — Peter Porker/Spider-Ham, perfectly voiced by the inimitable John Mulaney. While the two main Spider-Man characters provide the story with its pathos, the other alternate versions exist to playfully kid the series' mythology, winking and nodding at die-hard fans of the comics while still entertaining those only familiar with the other major movies.

Add to that Liev Schreiber as a terrifying Wilson Fisk/Kingpin and Kathryn Hahn as an intriguing new version of Doctor Octopus (Olivia "Liv" Octavius), and you've got a supporting cast more than capable of keeping up with the main duo.

The film's amazing soundtrack is also arguably a character of its own; it is easily the best music ever used in a "Spider-Man" movie, and that's saying something considering Danny Elfman provided the score for the first two "Spider-Man" movies (in 2002 and 2004) and contributed to the third one (in 2007).

This brings me to the big question: Why did I initially pan "Spider-Man: Into the Spider-verse?"

At the time, I was put off by what I perceived as excessive fan service. There is a tendency these days for pop culture properties to become a bit like an ouroboros, constantly feeding off their own self-references and creating entries that feel more like products than works of art in the process. This is still an unwelcome trend, in my view, one that can come across as pandering and artificial — yet that doesn't mean all fan service-based movies are bad. In the case of "Spider-Man: Into the Spider-Verse," I can see it now as a love letter to the Spider-Man movies rather than a cynical cash-in, as manifested by the thought and care put into the two main characters and the cleverness of the jokes made about the rest (contrast that with some of the cringe-inducing scenes from "The Amazing Spider-Man 2," like where one character walks down a hall and we see a row of references to the technology used by other Spider-Man villains). Fan service can be good or bad, and I made the mistake in my initial review of not being able to differentiate the former from the latter.

I also must confess that the sheer number of major characters in the new movie gave me flashbacks to "Spider-Man 3," which failed primarily because it was juggling so many characters — the hero, the love interest, three villains and the usual wealth of quirky side characters — that each potentially interesting storyline felt shortchanged (dancing emo Peter Parker didn't help matters either). Yet the potential for character overload here was averted because the filmmakers knew to focus on the stories of the central pair rather than have each subplot compete for equal attention. As a result, unlike "Spider-Man 3," the movie never lost its narrative coherence or felt like two movies crammed into one film's running time.

Finally, I was concerned that "Spider-Man: Into the Spider-Verse" wouldn't work as a movie because it depended too much on familiarity with the pre-existing storyline to make complete sense to the casual viewer. This is the one criticism that I still feel is valid: If you aren't at least passingly familiar with the Spider-Man mythology, there are large sections of this film that will fly right over your head. It also contributes to why this film, for all of its depth, doesn't quite achieve the transcendent profundity of the best Spider-Man movie ever made, 2004's "Spider-Man 2," which was accessible even to people who hadn't seen the first movie and even now was more grounded and more philosophical than any other entry in the series. None of this meant that "Spider-Man: Into the Spider-Verse" was a bad movie, though — it simply ranks as the second best "Spider-Man" film.

It is absolutely worth seeing, however, both for fans of gorgeous animation and for people who enjoy powerful, poignant and joyously fun superhero flicks. If the great power of a critic is that I have the ability to pass something resembling official judgment on movies, then the responsibility is to be open-minded about my earlier opinions and publicly reevaluate them when I believe they were in error. That was the case for "Spider-Man: Into the Spider-verse," and if you have a chance to check it out on Netflix, I highly recommend you do so.