"Spider-Man: Into the Spider-Verse" is a beautiful, bold, overstuffed melodrama

The new Spider-Man movie is a love letter to its own franchise. That's not entirely a good thing 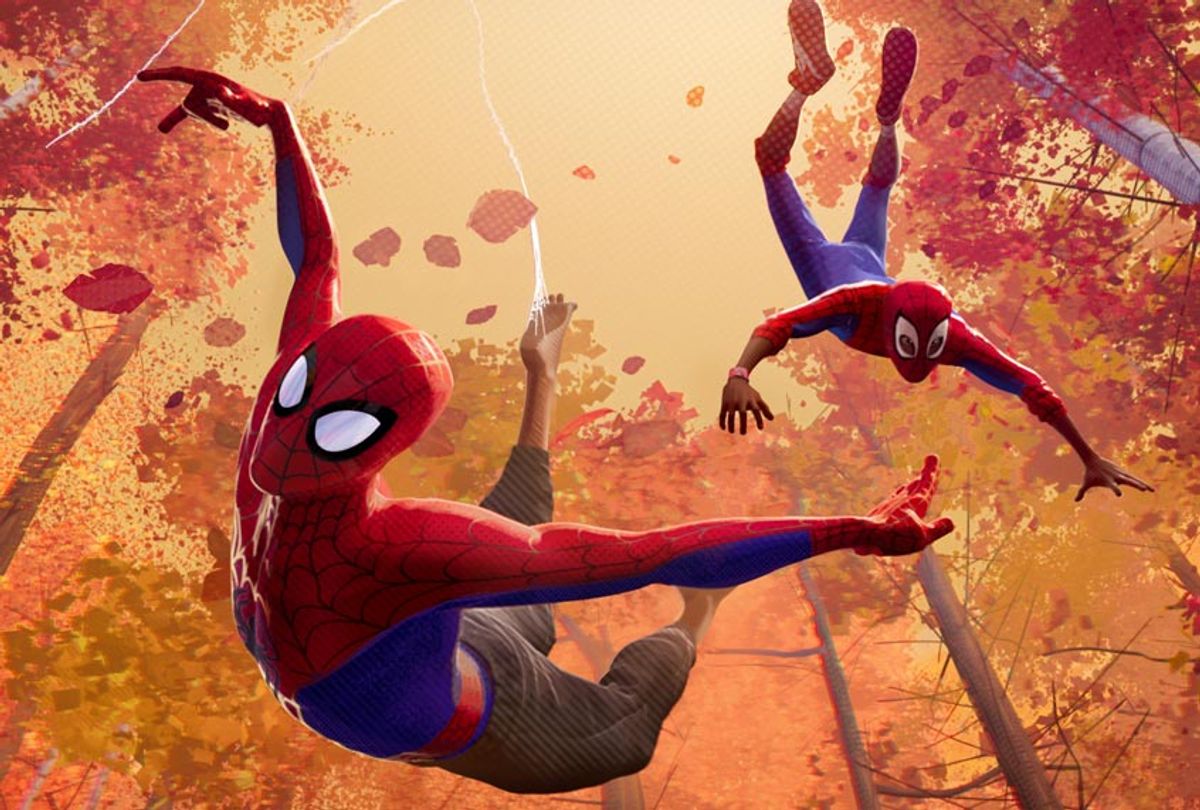 Peter Parker and Miles Morales in "Spider-Man: Into the Spider-Verse" (Sony Pictures Animation)
--

"Spider-Man: Into the Spider-Verse" has the strengths of "The Lego Batman Movie" and the weaknesses of "Avengers: Infinity War." It is more an experiment than an actual film, a riffing tribute to our culture's infatuation with the Spider-Man character that flaunts Oscar-worthy animation and meta humor which is sometimes witty and sometimes obnoxiously ironic. I can recommend it to people who like (a) the Spider-Man franchise and/or (b) exciting action, bright colors and loud explosions. If you want to see a more traditional Spider-Man movie, check out the 2002 "Spider-Man," the 2004 "Spider-Man 2" or the 2017 "Spider-Man: Homecoming." While my moviegoing companion who had seen several earlier "Spider-Man" movies was able to appreciate this flick, the one who had only seen the first film admitted to being lost.

Like "The Lego Batman Movie," this new Spider-Man movie uses self-awareness of its own iconic status as its chief gimmick. Its protagonist is Miles Morales (Shameik Moore), a biracial teenager who lives in a universe where there already is a Spider-Man named Peter Parker (Chris Pine). When Morales acquires spider powers and witnesses Parker's murder, he must assume the superhero role himself while being trained by variations of the Spider-Man character from other universes. Foremost among these is a generic Spider-Man who has fallen on hard times also named Peter Parker (Jake Johnson in a role that does him justice in a way "The Mummy" did not), followed by a Gwen Stacy-based superhero called Spider-Woman (Hailee Steinfeld), a 1930s-esque version of Parker known as Spider-Man Noir (Nicolas Cage), an anime variation called Peni Parker (Kimiko Glenn) and a nod to Spider Pig from "The Simpsons Movie" and inspired by a 1980s gimmick named Peter Porker/Spider-Ham (an underutilized John Mulaney).

Why include so many Spider-Man characters? To stuff the movie with clever allusions and in-jokes for the Spider-Man fans, of course. That's why this felt like a more serious version of "The Lego Batman Movie" — its effectiveness absolutely depends on you already knowing the basic origin story. "Spider-Man: Into the Spider-Verse" takes for granted that if you're watching, you already know the traditional Spider-Man story about a nerdy New York City teenager who gets bitten by a radioactive spider, acquires superpowers like extreme strength and endurance and the ability to climb walls (and sometimes web-sling), loses his uncle to murder and vows to fight crime.

Like "The Lego Batman Movie," "Spider-Man: Into the Spider-Verse" knows how to mine humor, poignancy and clever action scenes from its franchise-aware premise. It has fun with the fact that it's a Spider-Man movie in a world that craves Spider-Man, and there is something to be said about a film that delivers on its implied promise so fully.

Unfortunately — in keeping with a trend in superhero filmmaking exemplified by "Avengers: Infinity War" — "Spider-Man: Into the Spider-verse" contains too many characters to feel like a well-told story in its own right. As I wrote about the third Avengers movie in April, it simply isn't possible to juggle so many characters without letting some of them drop. "Avengers: Infinity War" dealt with this by shortchanging each individual narrative and saving its storytelling juice for the grand, tragic ending. "Spider-Man: Into the Spider-verse," on the other hand, focuses on the Moore and Johnson characters to the minimization of everything else. While this puts it a notch above the 2007 "Spider-Man 3" — which also infamously juggled too many characters and subplots, to less dramatically compelling effect — it still feels, in some ways, like an incomplete movie.

To their credit, the focus is on the best two Spider-Men in the film. Moore's Morales is an intelligent, idealistic teen who is funny and vulnerable, proving the lie to the haters who thought a non-white character couldn't carry the Spider-Man mantle (Stan Lee himself appears in a cameo to give his progressive seal of approval). Johnson's Parker, meanwhile, seems like a bouquet to the stereotypical overweight, lovelorn and depressed adult comic book fan. There is no ridicule for him here, aside from some predictable weight jokes; Peter needs to learn valuable lessons just as much as Miles, and their chemistry with each other provides the movie with its most interesting character moments.

On the other hand, there is also something a tad self-congratulatory about the whole exercise. While I don't share Bill Maher's rightly infamous contempt for the superhero genre, it is uncomfortable to watch any franchise indulge in this kind of horn tooting. Beneath the epic set pieces and one-liners, the constant patting of itself on the back, there is the cold, hard fact of this being the fourth "Spider-Man" canon to hit the big screen in 16 years. That averages to a brand new type of Spider-Man movie every four years: the superior version played by Tobey Maguire and directed by Sam Raimi (2002-2007), the bland reboot starring Andrew Garfield and directed by Marc Webb (2012-2014), the Marvel Cinematic Universe version with Tom Holland in the main role and directors Jon Watts and the Russo Brothers (2016-2018), and now this new one, which has more Spider-Men than I have fingers on one hand. At what point does it become creatively incestuous? When movie after movie cares less about telling its own story than about glorified metatextual navel-gazing, how much of it is clever and how much of it cynical?

A word must be reserved for the quality of the animation. It is, as I mentioned before, Oscar-worthy. When I spoke to one Spider-Man fan about this film, he said that he wasn't as excited about it as he is for the live-action movies. While he may be right about the quality of this film compared to the installments directed by Jon Watts or pre-"Spider-Man 3" Sam Raimi, he'd be wrong if this beautiful animation was used for a better script. To quote Roger Ebert's review of the 1989 "Batman," this "is one of the most distinctive and atmospheric places I’ve seen in the movies. It’s a shame something more memorable doesn’t happen there."