Most critics love the third "Avengers" movie. But it's a "movie loaf" that embodies everything wrong with Hollywood 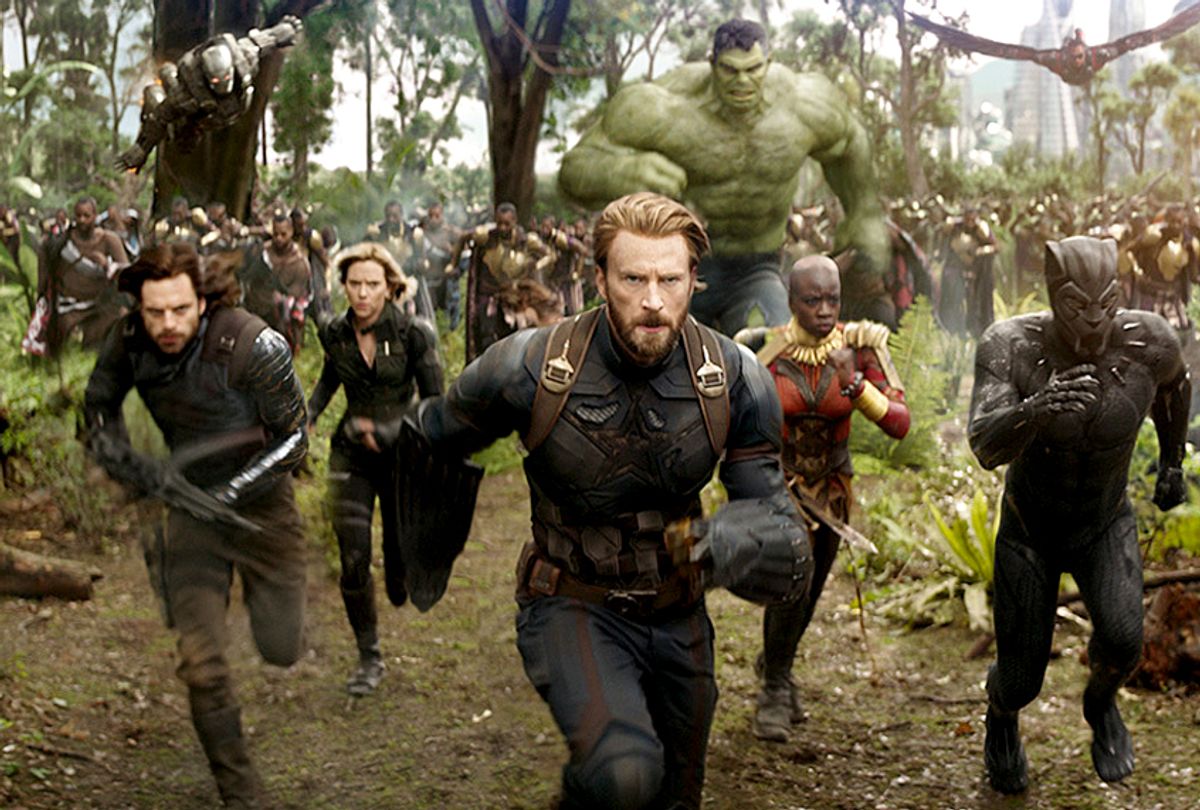 "Avengers: Infinity War" isn't just a gussied-up mediocrity being widely mistaken for a good movie. It's also, at least arguably, a dangerous movie for anyone who cares about the future of American cinema.

Since about half my argument depends on discussing key plot elements that come late in the film, a few paragraphs from now there will be a massive spoiler alert. I guess that means this is your pre-alert alert.

The biggest problem with "Avengers: Infinity War" is evident even for someone who has just seen the advertising, and may never even see the movie. The poster pretty much gives it away — the listing of dozens of glittering names from its star-studded cast, the assembly of countless superheroes and regular heroes and peripheral characters that audiences are meant to love.

As with many other superhero movies that try to stuff too many characters and subplots into one container, "Avengers: Infinity War" feels less like a coherent story and more like an attempt to wring as much money as possible out of its various superhero characters through virtue of sheer name recognition. By some accounts, this movie cost as much as $400 million to make. Those in charge are the directing team of Anthony and Joe Russo, who also made the last two "Captain America" films. The screenplay is credited to Christopher Markus and Stephen McFeely, though there's no telling how many producers, executives and rewrite specialists may have been involved.

If early box office returns wind up proving accurate, this strategy is likely to pay off, bigly. While it's tempting to buy into the Marvel Studios line that this is all the culmination of 10-plus years of storytelling set up, that's not quite true. Most people aren't going to see this because they're so amped-up to meet the long-hyped supervillain at the end of that road, a would-be universe-conqueror named Thanos.

Most fans are showing up because they want to see how their favorite superhero — whether that's Iron Man (Robert Downey Jr.) or Captain America (Chris Evans), Thor (Chris Hemsworth) or the Incredible Hulk (Mark Ruffalo), Doctor Strange (Benedict Cumberbatch) or Black Panther (Chadwick Boseman), Spider-Man (Tom Holland) or Star Lord (Chris Pratt) — will fare in the supposedly epic tale unfolding on the screen.

All of which is fine, at least in theory. The problem is when that concept runs smack into the practical realities of filmmaking. You can't contain as many characters as "Avengers: Infinity War" tries to juggle and also manage storylines for all of them that are told in a satisfying way. There are major developments that occur for each these characters — which in a normally scaled movie would be given time and weight — that get rushed through, simply because the filmmakers have so much else they need to do to wrap up the whole spectacle inside two and a half hours. As a result, instead of feeling each of these character payoffs, one is merely left feeling shortchanged.

Another problem with containing so many characters and storylines is that they strip a movie of its identity. On the most immediate level, this makes it difficult for audience members who aren't already acquainted with all of the different characters and storylines — and intimately familiar with at least several of them — to feel any investment in what's happening. I don't just mean what's happening in the supposedly big, emotional moments, but also just the standard humming and ticking of the plot.

One could argue that this is the same problem faced by any sequel, but that isn't entirely accurate. While a good sequel may still be difficult to follow for someone who hasn't seen the previous film(s), it should always tell its own self-contained story in a way that can be understood and appreciated on its own terms. Furthermore, a good sequel finds effective ways of introducing its characters to viewers brand new to the franchise can connect with them. When a film is as overstuffed as "Avengers: Infinity War," the only way to keep audiences invested is to hope that they already were before they walked into the theater.

This leaves "Avengers: Infinity War" as less of a movie than a "movie loaf," somewhat akin to the prepackaged mystery meat available at the deli counter. It's a combination of various parts and pieces that could have been organic parts of something that was originally tasty, but here get ground up and mixed together.

All of these problems would merely be unfortunate if "Avengers: Infinity War" could be viewed an isolated incident. They look downright troubling when you consider that this movie may actually kick off a trend. Hollywood studios have made it clear for years that they would love nothing more than to churn out movie-loaf products like this one because of their obvious financial potential. That's why we keep being fed overstuffed movies like "The Amazing Spider-Man 2" in 2014, "Avengers: Age of Ultron" in 2015, "Batman v. Superman: Dawn of Justice" and "Captain America: Civil War" in 2016 and "The Mummy" in 2017.

Not all those films were qualitatively the same, of course — "Captain America: Civil War" had enough focus on the personalities and ideologies of Captain America and Iron Man to be legitimately good, while on the other side of the spectrum the ho-hum attitude that permeated "The Mummy" made it downright awful. They all shared the problem of being focused less on telling a good story than on building a shared universe that would make other future stories possible. These were movies that existed in large part to advertise other movies, a stark contrast to the era when advertisements for movies at least had the decency to stop once the opening credits started rolling.

Yet "Avengers: Infinity War" is more sinister than these other projects because (a) its scale is far greater and (b) its box office triumph is likely to be several orders of magnitude larger. Because of (a), what for those other movies was merely a fog surrounding the larger story is, for this one, virtually the entire experience. Because of (b), we're likely to see a lot more "movies" like this one.

This brings us to my final major criticism of the film, which must be prefaced by the aforementioned spoiler alert. You are warned! Bail out now! No complaints from this point forward!

A considerable amount of the buzz preceding this movie's release was the anticipation over which major Marvel characters might die. In the end, "Infinity War" economically addresses that dilemma by simultaneously killing off virtually everyone and virtually no one at the same time. I say virtually everyone because, when it comes to the big stars, a number of names wind up falling: Black Panther, Spider-Man, Doctor Strange, Loki, every Guardian of the Galaxy except Rocket Raccoon. By the time the ash has settled, the only major heroes left standing are the core Avengers — Iron Man, Captain America, Thor and the Incredible Hulk — as well as a handful of well-liked side characters.

Yet it's pretty obvious, at least for anyone who has followed the Marvel Cinematic Universe's business strategy, that most of the killed-off characters won't remain dead by the end of the fourth "Avengers" movie. Sequels have already been confirmed for "Guardians of the Galaxy" and "Spider-Man: Homecoming," and it's inconceivable that "Black Panther" won't get a follow up after it grossed $1.3 billion worldwide. As a result, the emotions we're supposed to feel as characters audiences have grown to love quite literally turn into dust and blow away means nothing. We know they're going to come back; the only question is whether the filmmakers will come up with a way of resurrecting them that doesn't feel contrived.

The one silver lining in all this is that by forcing the next "Avengers" film to focus on only four major characters rather than more than a dozen -- and the same four major characters who made the first "Avengers" movie into a classic -- "Infinity War" may actually permit its as-yet-untitled follow-up to tell a focused, character-driven story. Doing that won't redeem the sins of "Avengers: Infinity War." But it might will allow this chapter in the story of the Marvel Cinematic Universe to end as something more than a hopeless muddle.