Chief Justice Roberts wrote both of Thursday's opinions, which suggest the depth of his assault on democracy 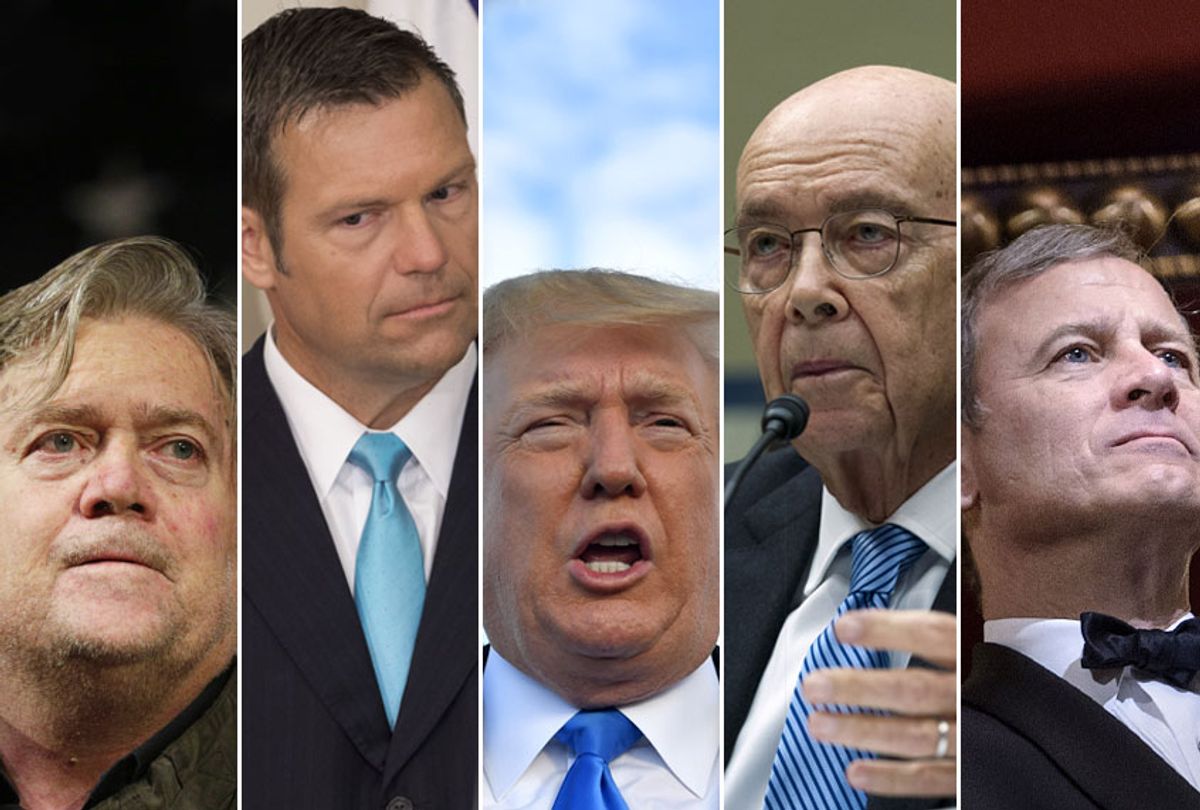 A pair of rulings handed down by the Supreme Court on the last day of its current session shows just how much Chief Justice John Roberts has overseen the slow destruction of the democratic process in this country over the last decade.

Since assuming the center seat on the nation’s highest court in 2005, Roberts has ruled in favor of unlimited corporate spending in political elections and against enforcement of the Voting Rights Act. This week he added allowing partisan gerrymandering to continue and at least a potential citizenship question on the census, an obvious attempt to intimidate non-citizens and immigrants out of participating.

Yes, technically Roberts joined with the court's four "liberal" justices in a complex 5-4 decision on whether the Trump administration can ask all recipients a citizenship question on the 2020 census for the first time since 1950. But his ruling isn’t anything to get excited about. Quite the contrary.

The question, which critics say would further reduce the already low Hispanic participation rate, had been blocked by numerous federal courts. The Trump administration had claimed it was necessary to better comply with federal voting rights law.

"There’s no evidence in this record that the secretary [of Commerce] would have asked this question had the Department of Justice not requested it," Solicitor General Noel Francisco argued in court.

But there was plenty of evidence to suggest that this question was fed to the Trump campaign team around the time of the election by former Kansas Secretary of State Kris Kobach, a notorious advocate of voter suppression tactics. It likely came through former Trump campaign CEO and White House adviser Steve Bannon, before landing in the lap of Commerce Secretary Wilbur Ross, who oversees the census. The administration simply lied about all that.

Rep. Grace Meng, D-N.Y., asked Ross during a House Appropriations subcommittee hearing last year, “Has the president or anyone in the White House discussed with you or anyone on your team about adding the citizenship question?"

Ross replied: "I am not aware of any such."

His lawyers later admitted, however,  that "Secretary Ross recalls that [Steve] Bannon called Secretary Ross in the Spring of 2017 to ask Secretary Ross if he would be willing to speak to then-Kansas Secretary of State Kris Kobach about Secretary Kobach's ideas about a possible citizenship question on the decennial census," despite initial claims that Ross could not “confirm that the Secretary spoke to Steve Bannon regarding the Citizenship Question."

In a July 2017 email to Ross, Kobach proposed wording for a citizenship question. He complained that "aliens who do not actually 'reside' in the United States are still counted" in the census numbers used to determine how many seats in Congress each state gets. This is ludicrous on its face: You do not have to be a citizen of a given country to "reside" within it.

The evidence is damning and difficult to ignore — but if the Trump administration had not blatantly lied to Roberts’ face, they probably would have gotten away with it.

“The sole stated reason" for the citizenship question, Roberts wrote in his opinion, "seems to have been contrived. We are presented, in other words, with an explanation for agency action that is incongruent with what the record reveals about the agency's priorities and decisionmaking process."

The decision remands the case to lower courts to be reconsidered. The census wasn’t saved by the Supreme Court, but by Trump’s incompetence. Roberts essentially stated that the citizenship question was legitimate — but that the government had to come up with a better excuse for it.

The U.S. census has never been about how many people are citizens or eligible voters in a given area. It's about a much simpler question: How many people live there. Adding the citizenship question, in light of the evidence that it would depress response rates, only serves as a direct contradiction of the census' principal purpose. Congress has directed the Census Bureau to spend no more on the 2020 Census than it did in 2010 when, according to the government's reports, Latinos were undercounted by 1.5 percent and African-Americans by nearly 2 percent.

Under Roberts’ tenure, the court's conservative justices have previously provided free legal advice to favor certain outcomes. For instances, they asked the Trump administration come back several times with modifications to its so-called travel ban, so that the court could pretend it was something other than a "Muslim ban." In the infamous Citizens United case, the Roberts court had the plaintiff reframe demands in order for the conservatives to rule on the case they wanted, rather than the one actually in front of them.

Unfortunately for the Trump administration, even with a second bite of the apple on the census question, this case is likely to face even more scrutiny.

As a federal trial judge in Maryland ruled earlier this month, new evidence presented after oral arguments had been heard by the Supreme Court had raised "a substantial issue." The recently revealed evidence shows just how racist the basis for this entire question actually was.

The late GOP redistricting strategist Thomas Hofeller played a substantial role in adding the citizenship question, according to documents uncovered after his death. Hofeller argued that adding a citizenship question would depress Hispanic response rates, thereby allowing states to redraw districts that boosted “Republicans and non-Hispanic whites” to an unfair electoral advantage for years to come.

The Supreme Court did not initially consider the Hofeller evidence, which did not emerge until the case had been argued, but the evidence of racial bias will indisputably be part of the record the second time around. In a blatant attempt to stop congressional oversight on this front, the Justice Department on recently threatened to invoke presidential powers to withhold the documents on its efforts to add the citizenship question, unless House Democrats backed off their threats to hold Ross in contempt of Congress. So far, Democrats haven’t blink.

In light of an earlier ruling by Roberts, the census case is merely a temporary failure and another example of a rookie mistake by Trump.

Before handing down his surprise decision in the census case, Roberts ruled alongside the other four justices appointed by Republicans to allow partisan gerrymandering to go unchallenged in federal court. This essentially guarantees that the political party that controls a statehouse can draw voting districts however it wishes, without intervention.

"For the first time ever, this Court refuses to remedy a constitutional violation because it thinks the task beyond judicial capabilities,” Justice Elena Kagan wrote in dissent. “Of all times to abandon the Court’s duty to declare the law, this was not the one. The practices challenged in these cases imperil our system of government. Part of the Court’s role in that system is to defend its foundations. None is more important than free and fair elections.”

The ramifications of this decision will be felt for decades to come all over the country. There's ample evidence that Republicans in office have pursued gerrymandered maps to shut out people of color or other groups likely to vote Democratic — either by carving them up and dispersing them, or by concentrating them into as few districts as possible.

John Roberts, who gave Republicans a green light to install legislative majorities against the will of the people — and may yet allow them yet another tool to keep power through the census — seeks to convey a sense of consensus, as biographer Joan Biskupic notes. Supreme Court justices "do not sit on opposite sides of an aisle, we do not caucus in separate rooms, and we do not serve one party or one interest. We serve one nation," Roberts insisted last October.

But as Nse Ufot, the executive director of  New Georgia Project,  the nonprofit voter engagement group founded by Stacey Abrams, notes: “Justice Roberts is hiding behind the concept of federalism. They’re using the separation of powers and branches of government as a pretext for attacking civil rights. They have a sacred duty to uphold the Constitution. [The 2013 decision to overturn parts of the Voting Rights Act] told us everything we needed to know about the Roberts Court and their hostility toward civil rights and voting rights.”

Roberts wrote both of Thursday’s majority opinions. This is his project, and it's not over.