Schmoozing with Putin and the Saudi prince, insulting allies, a pointless DMZ photo-op. Could it have been worse? 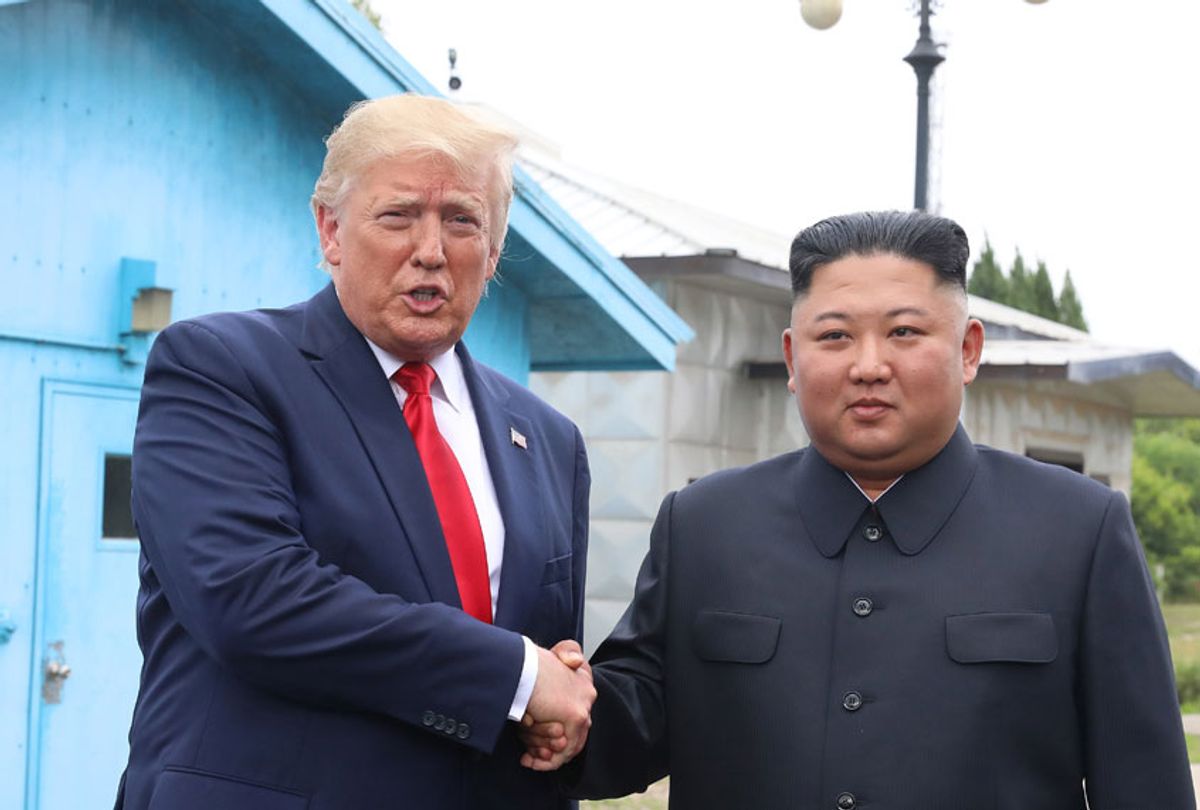 It was obvious by Friday that Donald Trump's trip to Japan for the annual G20 meeting was going to be a doozy. I don't think anyone expected quite the circus it turned out to be. At least the European allies don't have to feel as if Trump has it in for them alone. This time around he showed he can be rude and disdainful toward America's Asian allies as well.

Ignorant of history and contemptuous of existing treaties, as usual, Trump insulted the host country on his first day by complaining, “If Japan is attacked, we will fight World War III. But if we’re attacked, Japan doesn’t have to help us at all. They can watch it on a Sony television.” He either doesn't know or doesn't care that the U.S. dictated the defense treaty while Japan was under American military occupation after World War II, and the upside for us has been pretty obvious. Japan is a non-militarized, peaceful, democratic country, something that Trump apparently thinks should change. What could go wrong?

That was just the beginning of the slow-motion train wreck that took place over the next 48 hours. He spent virtually all his time palling around with his favorite strongmen. He praised Saudi Crown Prince Mohammed bin Salman to high heaven, telling him, “You have done a spectacular job." When asked about the ghastly murder of journalist Jamal Khashoggi, Trump said that “nobody so far has pointed directly a finger at the future king of Saudi Arabia," which is a bald-faced lie. U.S. intelligence agencies and UN investigators have both concluded that the prince ordered the gruesome execution.

The picture shown on the front pages of Japanese newspapers said everything about their deep, deep bond:

And then there was Vladimir Putin, Trump's bestie. The old pals shared some laughs before the cameras about sabotaging the American election and "getting rid" of journalists. Trump later claimed that he spoke to Putin "a little bit" about election interference, but let's face facts. Our president has made it quite clear that he thinks there is nothing wrong with a foreign adversary helping him win elections. (Needless to say, he would not feel the same way if his rivals were similarly aided. This isn't a matter of principle. He does not have any of those.)

But even with all the glad-handing and backslapping with his favorite dictators, Trump found time to watch the Democratic debates and get into a spat with former President Jimmy Carter, who said he believed that Trump is an illegitimate president because of Russian interference in the 2016 election. This upset Trump greatly, and many people clutched their pearls over the allegedly inappropriate comment by a former president. But it should be noted that nobody in the world has observed more elections over the past 40 years than Carter. He knows a thing or two about the subject.

And what can we say about Ivanka Trump, who seemed to be everywhere on the trip. She attended bilateral meetings with heads of state, did weird video read-outs of high-level meetings and generally acted as though she was a combination of secretary of state and the first lady, even inappropriately inserting herself into official photos. You have to wonder whether Mike Pence might have something to worry about.

The real highlight of all these trips is Trump's traditional freewheeling press conference at the end. He often seems a bit over-caffeinated and confused, perhaps the result of jet lag and spending too much time watching his favorite news shows on TiVo. This one featured some memorable moments, starting with the fact that it's pretty clear he doesn't know what "busing" is. But this was a stunning answer to a question from the New York Times' Peter Baker about a recent interview with Vladimir Putin, in which the Russian president declared that Western liberalism is obsolete:

Putin's interview was the talk of the meeting. Trump apparently did not understand any of it.

Normal leaders responded the way any American president would have responded in the past:

But the big news of the trip, of course, was the spontaneous reunion with Kim Jong-un at the DMZ between South and North Korea. Trump basically sent out a "call me maybe" tweet asking if they might say hello when he was in South Korea and Kim agreed. And why not? The most powerful man in the world is begging for Kim's attention and requires nothing but some pictures to make him look like he's accomplishing something. Kim doesn't have to give up his nukes, and in fact, they become much more valuable to him every time Trump comes looking for a photo-op.

Kim, of course, becomes a much more powerful player on the world stage as a result of all this. Meanwhile, the U.S. looks silly, particularly since Ivanka Trump and Jared Kushner attended the meeting with Kim at the DMZ as well, along with — Fox News personality Tucker Carlson.  Yes, you read that right. He later explained Trump's and his own thinking on this:

In fairness, ratcheting up tensions with North Korea would be much worse — as Trump is currently doing with Iran. But the idea that he's somehow working toward a positive goal of denuclearization is absurd. Kim understands perfectly well that his nuclear weapons are his calling card. He's not giving them up no matter how many cheap beachfront condos Trump offers to build.

Unfortunately, Trump's compulsion to lick the boots of murderous dictators is actually making Putin's contention that Western liberalism is obsolete look more and more as if it's true. The world's oldest liberal democracy is led by a former TV celebrity who goes around the world being advised by his totally inexperienced daughter and son-in-law and a Fox News pundit. It's hard to argue that liberal democracy, as practiced by the United States at the moment, is healthy and thriving.