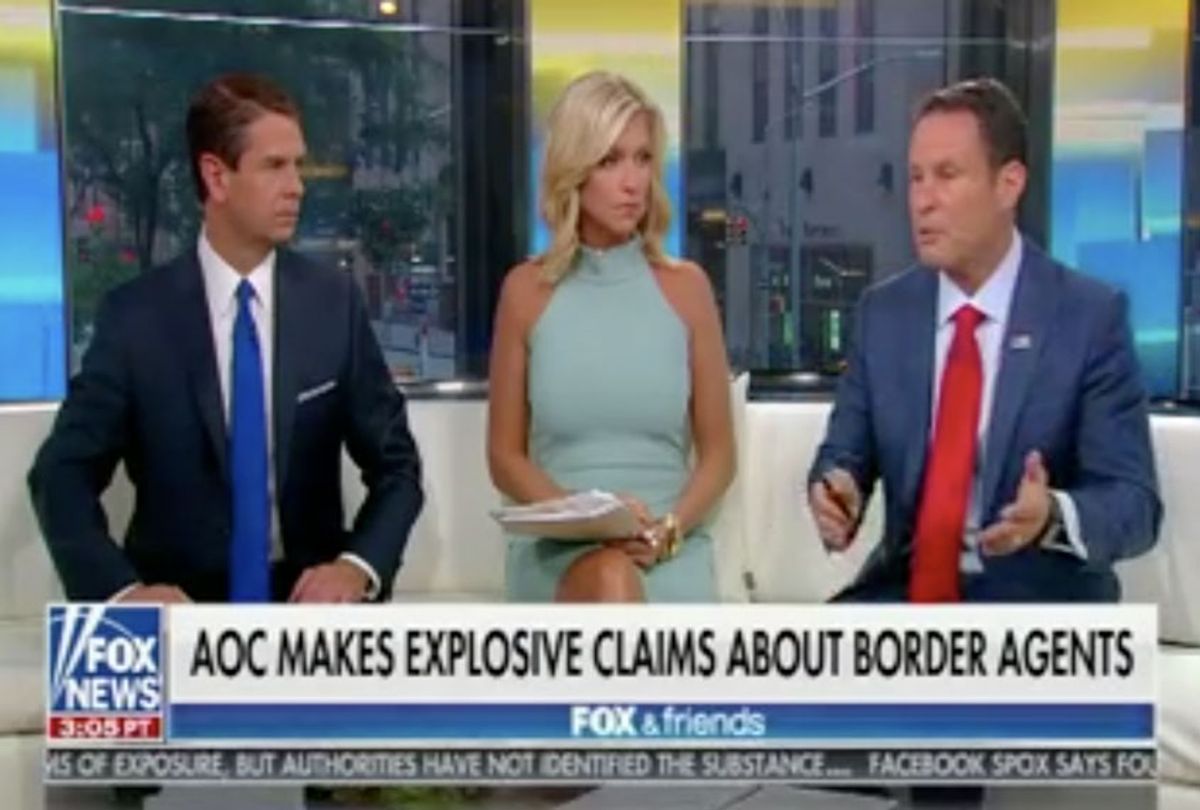 The hosts of "Fox & Friends,” President Donald Trump’s favorite morning show, joined with their guests in dismissing the concerns of Rep. Alexandria Ocasio-Cortez, D-N.Y., and other progressive legislators who expressed horror over the conditions at migrant detention centers along the southern border.

“Picture yourself: You have a house — family of five. You have a party. You have 30 people over. Maybe you have a big party, and you have 100 people over. And you have two and a half baths," co-host Brian Kilmeade told viewers. "In the beginning, it would be OK with 30. Then, after 100 people, it would be a little bit taxed. Maybe you got to get an outdoor facility? Can you picture 5,000? You can have the best facilities in the world, but they are so overstocked. Six hundred and seventy people thousand have come here illegally already. They had 89,000 last month. The month before, 130,000 coming illegally. They have facilities that hold hundreds — not tens of thousands.”

"And now you are going to walk down there with the facilities that they gave — that they're not pulling out of their pocket, they're uniforms you gave them – and say the facilities are not right?” Kilmeade continued. “They have been pleading for help. Kevin McAleenan, his predecessor have been begging for help for months. It took a July 1st last-minute ‘Hail Mary’ just to get a meager amount of humanitarian aid."

Kilmeade also asked questions of Ron Vitiello, the former acting deputy commissioner of Customs and Border Protection and the former acting director of Immigration and Customs Enforcement, for his views on the criticisms made by Ocasio-Cortez and others.

"Those facilities are very well-scripted in the sense of people get regulated coming in, coming out, how often they get fed, the temperature inside the cell, the cleaning — all of that stuff is regulated very highly by the men and women of CBP," Vitiello told Kilmeade.

He later acknowledged that overcrowding was a big issue, calling it “a problem.”

“These facilities were built for the booking procedure. People are supposed to be in those facilities for a couple of hours so agents can get their fingerprints, identify who they are, place them under DACA control and in the case of families, eventually released,” he continued. “But they're being overwhelmed. There are tens of thousands of people coming to the border all week long, and there's only so much floor space. There's only so much computer time that agents have to get people through the process."

In a series of tweets sent Monday, Ocasio-Cortez was scathing in her analysis of conditions at the border detention facilities.

"Just left the 1st CBP facility. I see why CBP officers were being so physically &sexually threatening towards me," Rep. Alexandria Ocasio-Cortez, D-N.Y., tweeted Monday. "Officers were keeping women in cells w/ no water & had told them to drink out of the toilets. This was them on their GOOD behavior in front of members of Congress."

She added, "Now I’ve seen the inside of these facilities. It’s not just the kids. It’s everyone. People drinking out of toilets, officers laughing in front of members Congress. I brought it up to their superiors. They said 'officers are under stress & act out sometimes.' No accountability."

Ocasio-Cortez also wrote in a two-tweet thread that "after I forced myself into a cell w/ women&began speaking to them, one of them described their treatment at the hands of officers as 'psychological warfare' - waking them at odd hours for no reason, calling them wh*res, etc. Tell me what about that is due to a 'lack of funding?' Now I’m on my way to Clint, where the Trump admin was denying children toothpaste and soap. This has been horrifying so far. It is hard to understate the enormity of the problem. We’re talking systemic cruelty w/ a dehumanizing culture that treats them like animals."