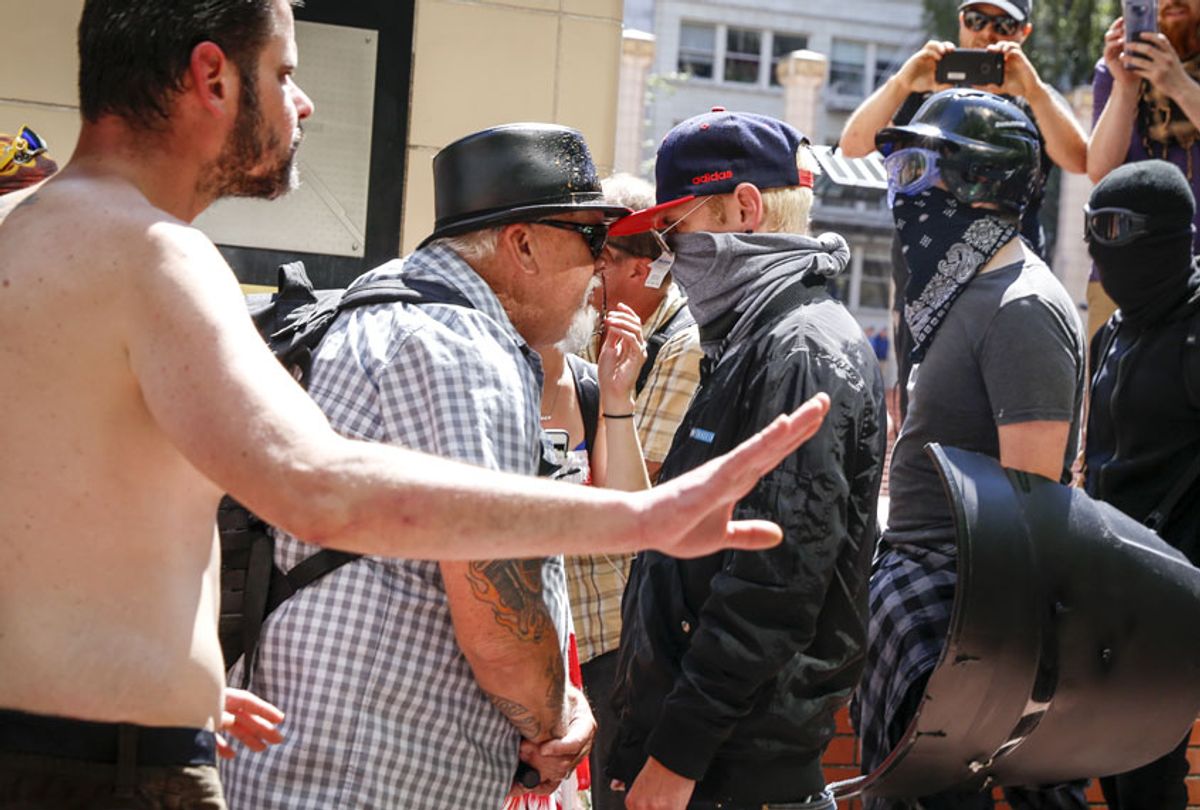 Conservatives on Twitter pounced on a dubious tweet from the Portland, Oregon, police to claim that members of the anti-fascist group known as "antifa" threw “milkshakes” laced with quick-dry cement during a clash with the far-right group Proud Boys over the weekend. There is no evidence to back up the claim, according to local media.

Antifa and the Proud Boys, a group often described as white nationalist and labeled a hate group by the Southern Poverty Law Center (although they deny both labels), clashed once again over the weekend.

At least three people were arrested and three others were hospitalized, Portland police said.

Among those injured was Andy Ngo, an editor and photojournalist for the conservative blog Quillette. Ngo was seen on video being pelted with milkshakes and silly string and later said he was punched and had his camera stolen.

During the clashes, Portland police tweeted that they had “received information that some of the milkshakes thrown today during the demonstration contained quick-drying cement.” The claim was quickly amplified by conservatives like Sen. Ted Cruz of Texas and Pizzagate conspiracy theorist Jack Posobiec. Followers then added stock images of chemical burns to concoct bogus claims they had been injured by the alleged “cement milkshakes.” These allegations were then picked up by media outlets like NBC News and ABC News — and, of course, Fox News.

The Portland Mercury reports, however, that no evidence has been presented by Portland police or anyone else since the weekend protests to suggest there was any cement in any milkshakes. In fact, the police department told the outlet that the tweet was based only on the suspicions of a single cop.

"A Lieutenant in the field broadcast information of his observation of a cup with appeared to have material on it consistent with quick drying cement," police spokesperson Lt. Tina Jones told the Mercury. "We put out the tweet to bring attention to this potential hazard and to encourage people to contact us if they were the victim of a crime."

When asked about the tweet by Katie Shepherd, a reporter at Willamette Week, the Portland Police Bureau cited an anonymous email that included a recipe for “cement milkshakes.” Shepherd pointed out that the anonymous email was “only sent to PPB after they tweeted the idea that cement mix had been added to the milkshakes.”

Robert King, a public safety adviser to Mayor Ted Wheeler, told Shepherd that the rumor began because a lieutenant “noted an ‘odor’ coming from the milkshake” but added that the police “did not collect any physical evidence of cement in shakes.”

Throwing milkshakes is a trend that started in the Britain, where far-right politicians like Nigel Farage and Tommy Robinson were pelted with milkshakes. The anti-alt-right group Popular Mobilization passed out the shakes in Portland, which were made of coconut-based ice cream and cashew milk, according to the group's Twitter account.

King told the Mercury that sending out the tweet was an “operational necessity.”

"We’re committed to sharing as much information as possible," he said. "Even if suspected, sharing that in an abundance of caution for our community is a responsible step."

If so, it’s unclear why the tweet remains up despite no reports corroborating the claim since the weekend.

Effie Baum, an activist with Popular Mobilization, told the New York Times that the police were simply wrong.