“People drinking out of toilets, officers laughing in front of members Congress” 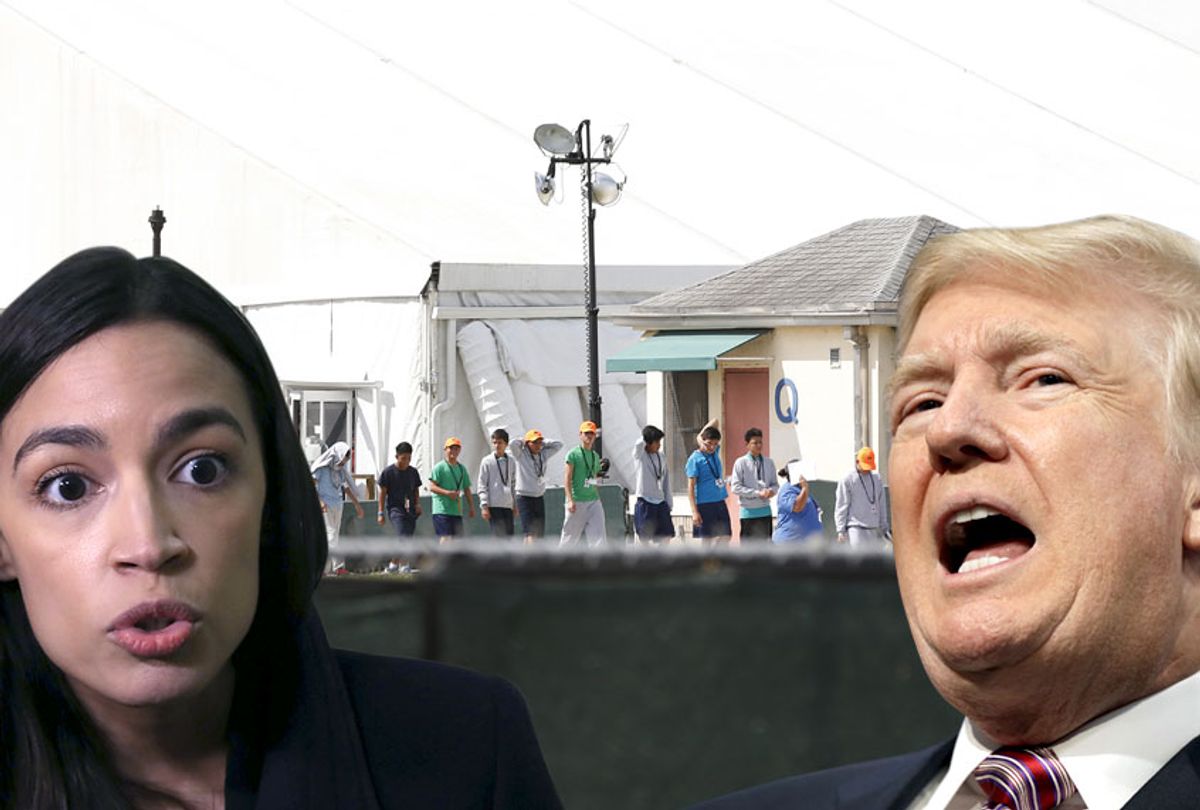 Migrant children who have been separated from their families can be seen in tents at a detention center in Homestead, Florida on June 27, 2019 (AP/Getty/Salon)
--

Lawmakers took to Twitter to expose the horrific conditions at migrant detention centers along the southern border, describing “people drinking out of toilets” and accounts of “psychological warfare.”

"Just left the 1st CBP facility. I see why CBP officers were being so physically &sexually threatening towards me," Rep. Alexandria Ocasio-Cortez, D-N.Y., tweeted Monday. "Officers were keeping women in cells w/ no water & had told them to drink out of the toilets. This was them on their GOOD behavior in front of members of Congress."

In a follow up tweet, she wrote, "Now I’ve seen the inside of these facilities. It’s not just the kids. It’s everyone. People drinking out of toilets, officers laughing in front of members Congress. I brought it up to their superiors. They said 'officers are under stress & act out sometimes.' No accountability."

She also posted a two-tweet thread, in which she wrote, "After I forced myself into a cell w/ women&began speaking to them, one of them described their treatment at the hands of officers as 'psychological warfare' - waking them at odd hours for no reason, calling them wh*res, etc. Tell me what about that is due to a 'lack of funding?'"

She added, "Now I’m on my way to Clint, where the Trump admin was denying children toothpaste and soap. This has been horrifying so far. It is hard to understate the enormity of the problem. We’re talking systemic cruelty w/ a dehumanizing culture that treats them like animals."

Ocasio-Cortez also made a point of retweeting some of the observations of her fellow legislators. This included Rep. Rashida Tlaib, D-Mich., who tweeted, “We can't just focus on the children anymore. I met grandmothers, mothers and fathers who are suffering. This is devastating. The look in one father's eyes broke me. I can't look away. #CloseTheCamps"

Rep. Madeleine Dean, D-Pa. tweeted about the heartbreaking sight of "15 women in their 50s- 60s sleeping in a small concrete cell, no running water. Weeks without showers. All of them separated from their families."

Meanwhile, Rep. Joaquin Castro, D-Texas, posted a video with the description that, "This moment captures what it’s like for women in CBP custody to share a cramped cell—some held for 50 days—for them to be denied showers for up to 15 days and life-saving medication. For some, it also means being separated from their children. This is El Paso Border Station #1."

A report by the New York Times describes the hostile treatment the legislators received from right-wing protesters after they left the facilities and described what they had witnessed:

At a news conference on Monday afternoon, the lawmakers’ emotional descriptions were almost completely drowned out by vulgar and racist heckling from a handful of protesters, some carrying Trump 2020 banners and posters calling for tougher border security, deportation and the construction of a wall at the southwestern border.

“Bunch of knuckleheads,” one man yelled as the lawmakers tried to describe what they had seen at a Border Patrol station in El Paso and a migrant facility in Clint. “Break out the onions,” a woman cried, mocking how some of the Democrats grew visibly emotional in front of the microphones.

“We don’t want Muslims here,” another yelled, minutes before Representative Rashida Tlaib of Michigan, one of the first Muslim women elected to Congress, vowed to “outlove your hate.”

These reports come one day after ProPublica revealed the existence of a Facebook group where border patrol agents made violently racist, sexist and xenophobic remarks about migrants, as well as threatening comments about Ocasio-Cortez. Those remarks were brought into sharper focus after Ocasio-Cortez was apparently accused of "threatening" border patrol agents during her visit to the facilities.

She tweeted, "And to these CBP officers saying they felt 'threatened' by me - They were literally discussing making a GoFundMe for an officer who attacked my on my tour. They confiscated my phone, and they were all armed. I’m 5’4”. They’re just upset I exposed their inhumane behavior."

Last year Salon spoke with Sen. Jeff Merkley, D-Ore., about his attempts at the time to visit detention facilities at the border and being blocked from doing so by border patrol.

"We were not allowed to speak to children," Merkley told Salon. "So you had these rules that had been in the facility — it's either Department of Homeland Security or Health and Human Services — they are imposing two-week requirements, you have to seek a waiver, they don't want to do it except when they can fly in special minders to control everything you do while you're there. We are not able to exercise oversight if we can not get into a facility on brief notice and actually talk to the relevant people, be they staff or be they actual for example the children or adult prisoners."