A big "Avengers" shadow looms over "Spider-Man: Far From Home"

Spoilers ahead! Don't read if you don't want to know specifics about why and how the new MCU movie works 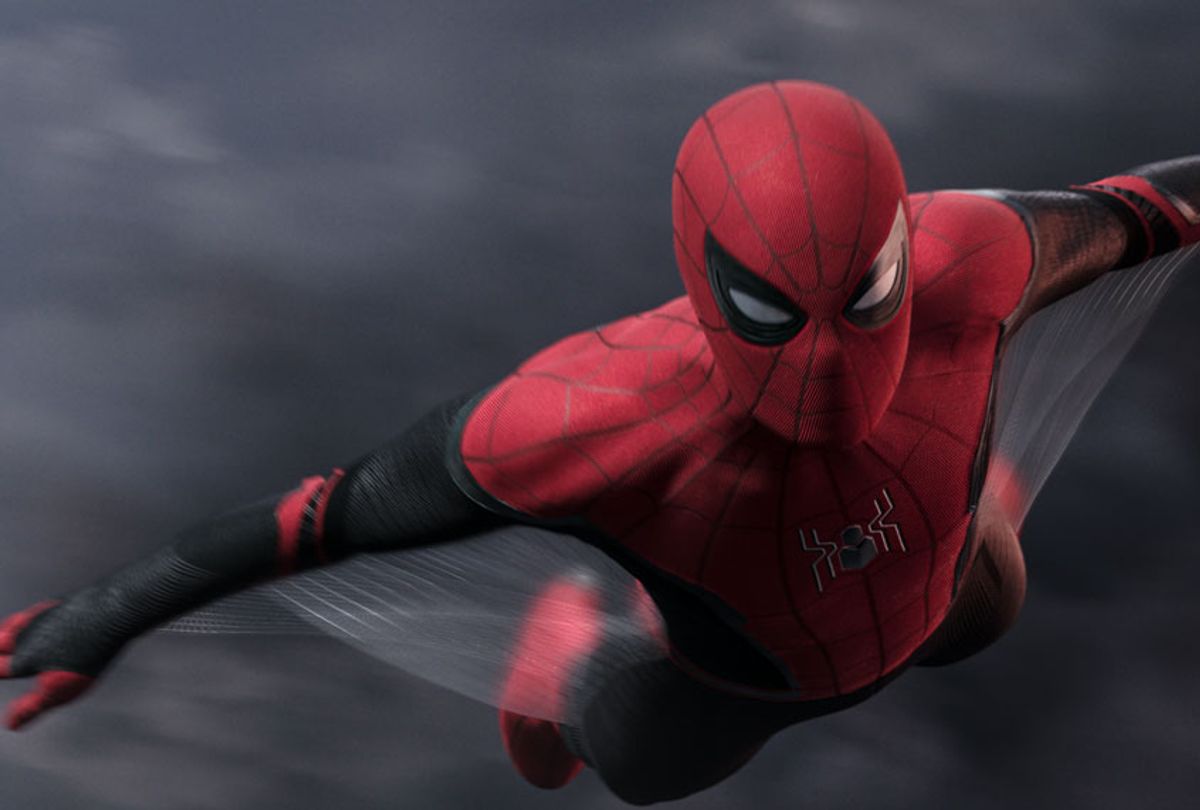 "Spider-Man: Far From Home" is a good movie that becomes great in its final act. This, of course, makes it difficult to discuss in depth without spoilers, so be warned: Everything that follows the next paragraph contains major plot details.

For those who don't want it spoiled, know that "Spider-Man: Far From Home" lives up to the promise of the last film in this series, "Spider-Man: Homecoming." As Spider-Man/Peter Parker (Tom Holland) joins other members of his high school class on a trip to Europe, he is pulled into superhero work by former S.H.I.E.L.D director Nick Fury (Samuel L. Jackson) despite his wish to have some vacation time where he can just enjoy being a kid. His most ardent wish is to profess his romantic feelings for MJ (Zendaya), a sarcastic but supportive friend who suspects that Parker may be the titular superhero, as well as have fun with his best friend Ned (Jacob Batalon). Yet even as he starts to have doubts about the whole superhero thing, he is nevertheless compelled to work with Fury and a stranger who seems to be a new superhero, Mysterio/Quentin Beck (Jake Gyllenhaal), who claims to come to this planet from an alternate universe in order to fight extradimensional monsters named Elementals that currently threaten our world.

For its first two acts, "Spider-Man: Far From Home" works for the same reasons as "Spider-Man: Homecoming". In order to distinguish themselves from other entries in the Marvel Cinematic Universe, they focus on the idea of a teenager struggling with having to moonlight as a superhero. There are class bullies and competing love interests, demanding teachers and parents and the general immaturity of youth. When "Spider-Man: Homecoming" was released in 2017, the new twist was necessary to distinguish this third cinematic iteration of the Spider-Man from the first two (which, having been launched in 2002 and 2012, was already quite familiar to audiences). This time around, director Jon Watts and co-writers Chris McKenna and Erik Sommers demonstrate that they can use that premise as the foundation for an entire series rather than simply being a way of not making this feel like a clone of the original films.

This becomes especially true in the movie's final act, when it truly begins to shine.

One strength of the final act is Gyllenhaal's performance as Mysterio. Anyone familiar with the comics isn't going to be surprised that Mysterio, who presented himself as a hero and avuncular figure to Parker, was in fact a villain the entire time. Yet Gyllenhaal's character gets an update for this film, though — like the villainous Vulture (Michael Keaton) from the previous movie, the writers blend the original Mysterio backstory with new elements unique to the Marvel Cinematic Universe. Instead of being a disgruntled former special effects artist, Gyllenhaal's Mysterio is a disgruntled former employee of Iron Man/Tony Stark (Robert Downey, Jr.) who wishes to be regarded as a new superhero to spite the boss who mistreated him as well as to find a new mission in life. His ultimate goal isn't world domination or world destruction (unlike the vast majority of other Marvel villains), but simply to find a place for himself in the world after a beloved superhero who wronged him took that away. It's a bold direction to take a supervillain, and Gyllenhaal manages to make Mysterio likable and menacing at the same time.

Another strength of the final act — as well as the movie as a whole — is the degree to which Iron Man's shadow looms over the entire story. A major subplot involves Spider-Man feeling like he needs to fill Iron Man's shoes after the character sacrificed himself to save the universe at the end of "Avengers: Endgame." Some of the most emotional moments of the film come when we are reminded of Iron Man's paternal bond with Spider-Man and Happy Hogan (Jon Favreau), who has started mentoring Parker both out of genuine fondness for the kid and because he knows it's what his best friend would have wanted. Yet Iron Man's legacy isn't an entirely positive one. His tendency to casually walk all over those with less money or power than him has produced not one but two of Spider-Man's antagonists: Vulture, as fans of the first movie may recall, turned to crime after Tony Stark ran him out of business, and now Mysterio threatens the world in part because Stark publicly humiliated him and demeaned his life's work. In a very real sense, "Spider-Man: Far From Home" is the tale of how a number of characters are reacting to the demise of a man who — in some ways positive, in some ways negative — wound up defining all of their lives.

The last major strength of the final act comes with a big plot twist in the post-credits sequence. This is where we see the Marvel Cinematic Universe's first appearance of J. Jonah Jameson, the publisher and editor-in-chief of The Daily Bugle — and he is played by J. K. Simmons, the same actor who made the role so iconic in Sam Raimi's original "Spider-Man" trilogy (2002-2007). The audience in my theater burst into applause when Simmons appeared on screen, and I can't deny that a big grin appeared on my face as well. Not only was Simmons' return as Jameson a welcome reminder of the Raimi movies that helped kick off the current superhero craze, but they also served two important functions: First, to expose Peter Parker's identity as Spider-Man to the entire world; and second, to subtly satirize online blowhards like Alex Jones, whom Simmons was clearly channeling in his performance.

Indeed, if there is any major flaw in "Spider-Man: Far From Home," it is that it still doesn't quite live up to the quality of the Raimi movies. Much of this is not the immediate fault of the filmmakers: Because their stories take place in a larger cinematic universe, there are inevitably going to be lacunae in the Spider-Man story arc for anyone who wishes to watch just these movies (someone desiring a complete story for Tom Holland's Spider-Man would also need to see "Captain America: Civil War," "Avengers: Infinity War" and "Avengers: Endgame"). This deprives the new "Spider-Man" series of feeling self-contained like the original Raimi trilogy, and although they have enough of a personality to feel different from other Marvel Cinematic Universe movies (and certainly more so than the bland "Amazing Spider-Man" series from 2012 to 2014), they still lack the inimitably quirky feel that makes the original trilogy so rewatchable even today.

It should also be noted that, although Batalon was apparently faking out the world when he claimed that the movie would not account for the fact that most of its cast would have aged five years as a result of the events of "Avengers: Infinity War" and "Avengers: Endgame," the film's need to account for the events of "Endgame" often slows down the story here. One problem of having a film series so dependent on events outside of its major storyline is that audience members who haven't seen the other films need to be caught up on it, a feat that does interfere with the proper telling of one's own story.

These aren't minor flaws, but "Spider-Man: Far From Home" is still a smart, fun and moving film, one that any fan of either the character or the Marvel Cinematic Universe is likely to enjoy.