I've been writing about climate change for 20 years. But my teenage sons have given my work a new meaning 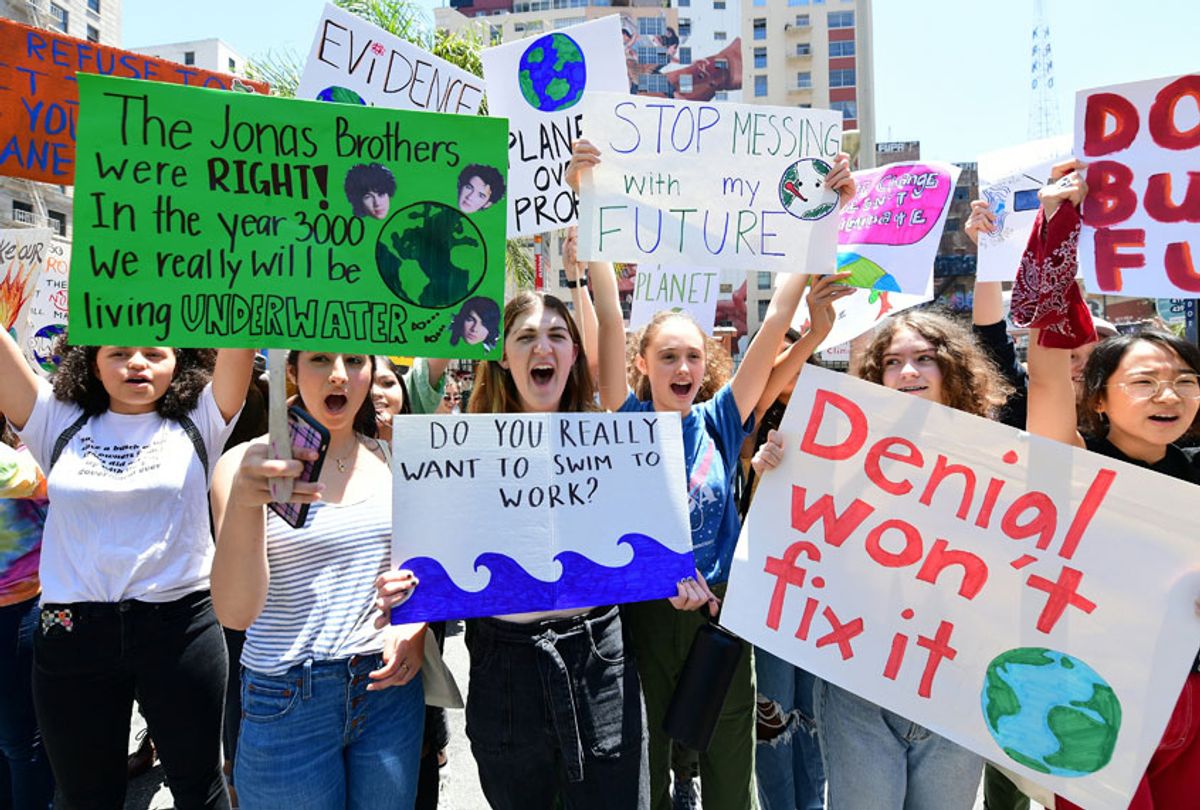 For 11 weeks this spring, my 14-year-old kid refused to go to school on Fridays, setting up a climate strike picket line in front of his school district building or the city hall in Iowa City, Iowa, where we live. A handful of other students joined him, including his older brother, as did a cadre of activist “grannies.” The numbers picked up when former NFL football star and local school alumni Tim Dwight showed up with a solar-powered sound system.

Inspired by Swedish student Greta Thunberg, who launched the strikes a year ago, the kids quickly joined a global network of climate strikers from Iowa to New York to Uganda to India and Australia.

In the end, my sons' weekly persistence paid off: The school district, which initially dismissed their efforts and told them to do something "productive," has agreed to pass a climate resolution that commits to dramatically reducing CO2 emissions and enacting a climate curriculum. The local city council members, who once proudly defended their toothless climate plan, have agreed to update it and fall in line with the exigencies of a climate emergency.

The students’ success in cracking business-as-usual policies should not be minimized. The climate strikes managed to accomplish more than any endless meetings or committees or recent movements by adults; they completely changed the climate narrative in our burg and forced adults to recognize the climate crisis as an emergency.

They accomplished this by reclaiming an old tactic that would have made my grandfather — a coal miner in the militant Progressive Miners Union — proud of his progeny: An uncompromising strike, with clear demands, and a fierce sense of urgency that made it clear they would never back down.

Unlike the one-day protests preferred by many in my generation, the kids simply didn’t go away. They came back week after week, refusing to let administrators, board members or city staff ignore them.

Unlike the non-confrontational “Iowa nice” ways in our town, the kids were in-your-face frank, and openly shamed adults for their lack of action and ignorance. They showed up at numerous school board meetings and city council sessions, and spoke defiantly of a lack of transparency and honesty from the local leaders, and the missed opportunities for clean energy, soil carbon sequestration, local food and zero waste.

When a school administrator took my youngest son, Massimo, behind closed doors, berated him and told him to go back to class, my son told the administrator: “Do your job,” meaning make climate education part of the curriculum.

When the mayor and city manager lectured my kids that state laws prevented them from setting energy efficiency benchmarks, the students did their homework and found out that city staff was misinformed. A local newspaper followed their leads with state officials. The kids proved that the city’s biggest carbon footprint — its buildings — could be strictly regulated for higher efficiency standards.

In many ways, I have been the biggest beneficiary of the strike: My sons gave me a second chance to step up as a parent and do something real about our climate crisis — a crisis that my baby-boomer generation ramped up with our postwar explosion of petroleum-fueled suburbs, coal-fired electricity and a wanton consumer culture that has enjoyed cheap products without considering the external costs.

It wasn’t enough to put solar panels on our house, drive hybrids, compost and buy local food. We needed to step up and make changes in local, state and national policies.

More so, they gave me hope for the still small possibility of justice, to paraphrase poet Grace Paley's anti-war sentiment in an age of climate breakdown and mass migration.

Prior to the student strikes this past spring, I felt overwhelmed by a sense of despair at my generation’s lack of real action on the climate crisis. My own work seemed incredibly ineffective.

In truth, I have been writing about climate change for nearly two decades, with a particular focus on energy, urban planning and global migration. As a journalist and historian, I have also covered protests and campaigns for environmental protection and civil rights in coal country, especially in Appalachia and the Midwest.

The constant theme in my work, however, has been an unmitigated failure to recognize the human and environmental costs of extracting fossil fuels, and hold corporations and sycophantic politicians accountable for the fallout.

Two years ago, when President Trump withdrew from the Paris Climate Accords, my youngest son asked me if there was any hope. My response came from the civil rights movement: “Hope resists.”

My sons have taught me — as a parent and adult — that it is also my responsibility to make sure those words matter today.

It's time for all parents to go on strike, as well.