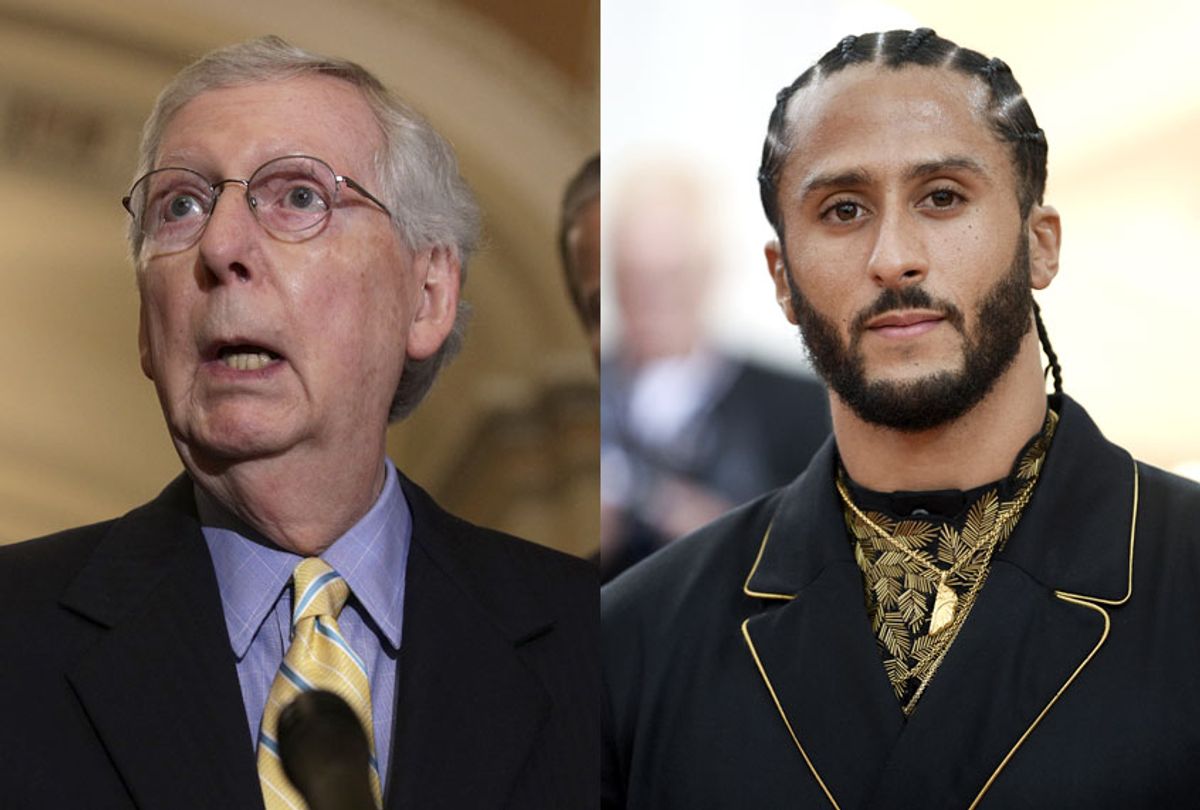 Senate Majority Leader Mitch McConnell has joined the chorus of Republicans denouncing Nike for agreeing to yank a sneaker with the Betsy Ross flag on its back following the protests of former San Francisco 49ers quarterback Colin Kaepernick.

"If we’re in a political environment where the American flag has become controversial to Americans, I think we’ve got a problem. I hope Nike either releases these shoes or some other shoe maker picks up the flag, puts it on a pair of shoes and starts selling it. I’ll make the first order," the Kentucky senator told an audience at an event celebrating hemp in Lexington, according to the Lexington Herald Leader.

The controversy emerged when Nike pulled a special Fourth of July Betsy Ross Air Max 91 off shelves after Kaepernick expressed concern that it could be viewed as racist. The company explained in a statement to CBS News that it "has chosen not to release the Air Max 1 Quick Strike Fourth of July as it featured the old version of the American flag."

McConnell was not alone among Republicans who expressed public dismay over Nike's position. Donald Trump Jr. tweeted that "if the Betsy Ross Flag, the flag of the American Revolution, is too offensive for Nike to commemorate The 4th of July maybe Nike should go with this... seems to be more in line with their views."

Don Jr. included a picture of a sneaker with a hammer and sickle, which are associated with the Soviet Union. Both his father and he have been accused of having improper contacts with Russia

Sen. Ted Cruz, R-Texas, posted a tweet on Monday saying, "It’s a good thing @Nike only wants to sell sneakers to people who hate the American flag.... @NFL #HappyFourth" The next day he added, "Yep, I own lots of @Nike I’ve been a life-long customer, since I was kid. But they’ve now decided their shoes represent snide disdain for the American flag. Since they don’t want my business anymore, I won’t buy any more. Can anyone recommend a good sneaker co that’s not so woke?"

Sen. Marsha Blackburn, R-Tenn., directly insulted Kaepernick in a tweet saying, "To the self absorbed football player who has a problem with the American flag, learn to show a little tolerance and a little respect. Grow up. You are not the center of the universe."

Sen. Josh Hawley, R-Mo., went on a three tweet rant on the subject, writing: "Nike thinks American flag is symbol of oppression? What planet are you on? Nike gladly allows Chinese Communist Party to tell it what products to sell while building its business around sweatshop labor. Nike is anti-American, pure & simple. Nike is a symbol of everything wrong with the corporate economy. They take advantage of our laws but send jobs overseas for sweatshop wages, partner w repressive regimes, aggressively avoid paying any US taxes, and then tell Americans to shut up and buy their stuff. Why do we put up with this?"

Arizona Gov. Doug Ducey went even further, going on a multi-tweet rant that described the decision as "shameful.” He added that he was "embarrassed for Nike" before announcing that "Nike has made its decision, and now we’re making ours. I’ve ordered the Arizona Commerce Authority to withdraw all financial incentive dollars under their discretion that the State was providing for the company to locate here."