Donald Trump wanted a big patriotic spectacle: All he got was a damp firecracker

Trump yearned for a show along the lines of North Korea or the Soviet Union. Mercifully, America doesn't do that 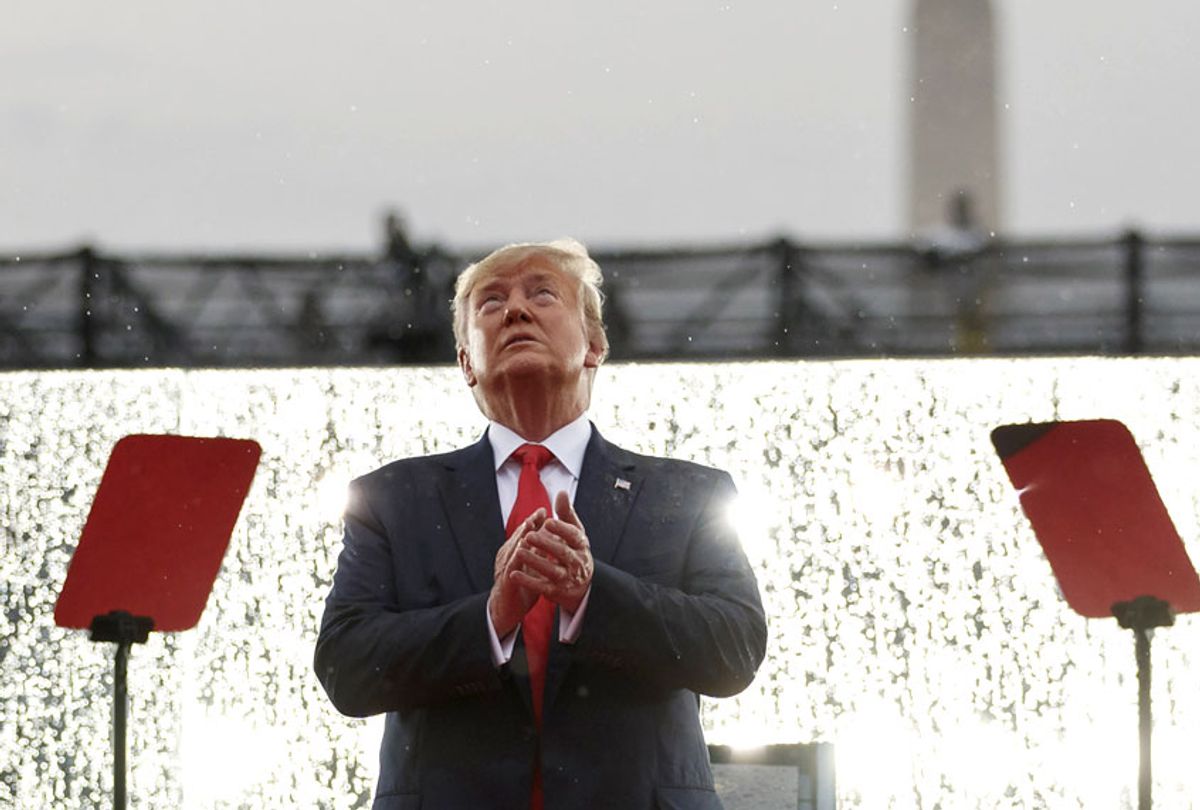 President Donald Trump looks up during the military flyovers at the Independence Day celebration in front of the Lincoln Memorial, Thursday, July 4, 2019, in Washington. (AP/Carolyn Kaster)
--

One of the more insignificant myths of the Donald Trump presidency is the one that claims he was inspired to order a magnificent military parade in Washington after viewing the Bastille Day celebration in France in 2017. It's true that Trump was excited by that parade was very excited by it and started making plans for a D.C. version on his way to the airport in Paris. But Trump had wanted the big tanks and marching soldiers and flyovers well before that.

According to the Huffington Post, he had requested a full-dress military parade for his inauguration and was told it couldn't be done because of the infrastructure in D.C. He explained to the Washington Post around the same time that he had big plans for the future:

So he's wanted this for a long time, probably since he was a kid. Like his BFF Kim Jong-un, he believes that Big Military Pageants are a sign of strength and will instill fear in the hearts of his enemies.

The U.S. doesn't do that stuff for a variety of reasons, not the least of which is that we aren't supposed to be a military dictatorship that uses military pageants to scare its own citizens. Donald Trump may be the only person on the planet who believes the United States of America needs to prove its military might to the world with a big show of heavy armor and airplanes. Everyone else is fully aware that the U.S. has the most advanced, sophisticated and fearsome military on earth.

Trump alone believes that America has long been perceived as weak and poor and without defenses, and that the way to get respect once again is to spend lavishly on the military, start an incoherent trade war, suck up to every strongman dictator around the globe and tear up as many treaties and international agreements as possible while offending all our allies.  If giving him a parade would stop him from doing all that, maybe we should have one once a month.

In the days leading up to Trump's July 4 event, the press reported that the administration was scrambling to put this thing together at the last minute. The military wasn't receiving intelligible instructions, there were many extra tickets, the airports were going to be closed and nobody knew if the roads and bridges in the D.C. area could hold the weight of tanks. We don't normally do that sort of thing in the nation's capital. And, needless to say, another corruption scandal erupted when it was revealed that the White House had enlisted the Republican National Committee to pass out VIP tickets to donors and friends of the president's re-election campaign, just one in a long list of examples of using taxpayer money for political purposes.

And Trump has now tarnished the military, one of the last institutions in America that most people still hold in some regard, using it as a cheap prop to make himself look like one of the strongmen he reveres. At one point during his Thursday speech at the Lincoln Memorial, the fortunate son who got five deferments during the Vietnam War (including the famous, and likely fake, "bone spurs" medical excuse) actually exhorted young people to join the military "and make a great statement in life — and you should do it.” None of his kids ever joined the military either, of course. It was recently reported that Trump's child support agreement for his daughter Tiffany stipulated that he would withhold all money if she joined the military.

During the 2016 campaign, Trump often complained about "the generals," wondering why we don't see the likes of George Patton and Douglas MacArthur anymore. He frequently shared the apocryphal story of Gen. Jack Pershing mass murdering Muslims with bullets dipped in pig's blood, applauding his willingness to win by any means necessary. (This almost certainly did not happen.) Just this week, Trump congratulated an accused war criminal, Navy SEAL Petty Officer Eddie Gallagher, taking credit for his acquittal before a military court and basically slapping the military command down for having prosecuted him in the first place.

In the day to day, Trump treated Gold Star families with contempt, insulted POWs and other war heroes and played politics with thousands of troops, sending them to the border for no good reason. But he loves the pomp and pageantry of the military and the idea that it makes him look like a big strong man to be commander in chief. On Thursday at Lincoln Memorial he used military officers as cheap props, forcing them to stand beside him on the dais, appropriating their apolitical status for his own partisan purposes. On the Fourth of July.

His crowd loved it, of course. For all the talk about Trump and his followers being isolationist and anti-war, they are not. The right wing is the most militaristic faction in American life and they will happily follow him into any war he wants to wage. At the moment Trump is confused about all that. He's been listening to the likes of Tucker Carlson, who is telling him that Republicans don't like war (and the Democrats do), but understands on a visceral level that something about that doesn't scan. Like all chickenhawks of the Vietnam era he wants to be seen as a heroic tough guy, but is scared to actually fight a war. So instead of giving his followers a war, he gave them a show.

Donald Trump is basically a carnival barker and a circus promoter. He's just not a very good one. Just as his wildly expensive and amateurishly produced inaugural was basically a bust, so too was his big "Salute to America." In fact, it was a sad and pathetic flop. What he had imagined as a grand display of military might along the lines of the Soviet-era May Day parades or  Kim Jong-un's North Korean tributes to Dear Leader ended up being a half-hearted air show with a handful of aircraft from each of the branches, accompanied by a fifth-grade primer on American history. It wasn't a normal Trump rally, but it wasn't a moving patriotic moment either.

As much as Trump tried to make it all a glorious paean to his leadership with the Blue Angels flying in formation over the Capitol to the strains of "Battle Hymn of the Republic," the timing was off, the sky was drizzling and the energy was low. Unfortunately for Trump, his old nemesis John McCain had the last laugh. Again.

The Blue Angels tribute at McCain's funeral in Annapolis was in every way more patriotic and  inspiring.