The curious case of Eddie Gallagher: Did Donald Trump help a Navy SEAL get away with murder?

Eddie Gallagher was accused of stabbing a wounded teenager to death. Trump's taking credit for getting him off 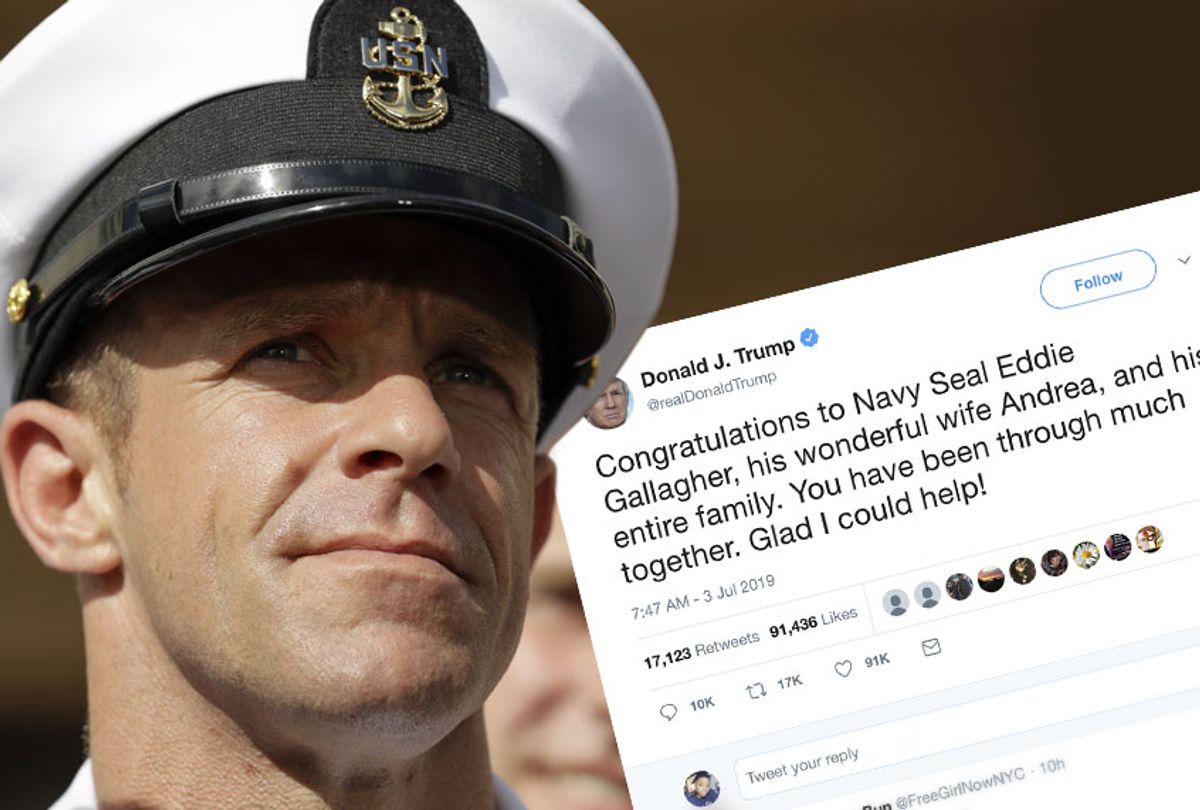 Aside from hosting an unprecedented Fourth of July celebration that doubled as a military parade on the National Mall, President Trump made another curious decision involving the military this week. He congratulated himself for helping to free a Navy SEAL officer who had been accused of a dozen separate crimes of war.

Eddie Gallagher, who until this week was a chief petty officer in the Navy, was accused of stabbing a teenage POW to death while the teenager was being treated by a U.S. medic in or near Mosul, Iraq, in 2017. Video images show that the bleeding fighter, who was thought to be between 12 and 17, was brought to the SEAL platoon for treatment. Two of Gallagher’s fellow SEALs testified in a military court that Gallagher unexpectedly stabbed the young ISIS fighter several times in the neck and side as a SEAL medic was treating him. Members of the platoon then posed for photos with Gallagher as he held the child soldier’s head up by the hair with one hand, and held his knife in the other.

Images also show that Gallagher performed his re-enlistment ceremony next to a dead body as another SEAL member held an American flag. At trial, prosecutors presented Gallagher’s text messages, one of which said: “Good story behind this. Got him with my hunting knife.”

Nearly a dozen members of Gallagher's platoon testified during the trial against him, but a jury of Gallagher’s military peers found him not guilty of pre-meditated murder this week.

In a bombshell move, one of the SEALs who was granted immunity to testify against Gallagher instead testified that he was the one who killed the teen, blocking his breathing tube as an act of mercy.  Because the charges against Gallagher weren't manslaughter or attempted murder or assault with a deadly weapon, but rather first-degree murder, he was found not guilty. He was, however, found guilty for taking a photo with the dead body He was sentenced to time served and will have his rank reduced, with approximately two months' loss of pay.

War is a terrible thing. There are always moral grey areas. But Gallagher never denied that he stabbed an unarmed, wounded child soldier who was receiving medical treatment and then posed for photos with the body after he died.

Gallagher was also charged with attempted murder in another case. He was court-martialed on 12 counts in all.

Describing his behavior as reckless and bloodthirsty, several men from Gallagher’s platoon said he gunned down a 15-year-old girl walking along a riverbank in Afghanistan and an old man carrying a water jug. They testified that Gallagher regularly fired into civilian crowds.

According to the military investigation, after Gallagher's fellow SEALs tried multiple times to report him for his behavior and were turned away by superiors, they resorted to messing with his rifle and firing warning shots to scare away civilians so he would miss his shots.

One of the seven Navy SEAL commandos from Team 7’s Alpha Platoon told investigators that senior leaders, who were allies of Gallagher, told commandos to “stop talking about it.” The New York Times reported what the Navy’s criminal investigation report, which included interviews with more than a dozen members of Alpha Platoon, found:

[S]even members of the platoon called a private meeting with their troop commander in March 2018 at Naval Base Coronado near San Diego. According to a confidential Navy criminal investigation report obtained by The New York Times, they gave him the bloody details and asked for a formal investigation.

But instead of launching an investigation that day, the troop commander and his senior enlisted aide — both longtime comrades of the accused platoon leader, Special Operations Chief Edward Gallagher — warned the seven platoon members that speaking out could cost them and others their careers, according to the report. ...

As Chief Gallagher’s men were sounding an alarm about killings in Iraq, his superiors were lavishing praise on him. An evaluation quoted in the investigation report called Chief Gallagher the best chief of the 12 in the team, and said, “This is the man I want leading SEALs in combat.”

A few days after the March 2018 meeting, the chief was awarded a Bronze Star for valor under fire in Iraq.

Investigators found that several of Gallager’s fellow SEALs alleged that he threatened to kill them if they reported his actions. At trial, Gallagher’s defense portrayed his own unit as petulant and lazy millennials.

He was found not guilty on the charges of shooting civilians, despite testimony from seven other SEALs, because the trial happened too late to preserve useful forensic evidence.

One of Gallagher's lawyers is also on President Trump's legal team, and thanked the president for bringing "this case out of the shadows and into the light" in an appearance on Fox News following the verdict. Gallagher thanked Trump on Fox News “for intervening when he did."

The president congratulated Gallagher following his appearance on Fox News on Wednesday, tweeting: “Glad I could help!”

Trump is either taking credit for the outcome of a criminal trial or admitting he interfering with it. Either possibility is deeply concerning.

In March, Trump tweeted that Gallagher was being moved to less restrictive confinement “in honor of his past service” to the country. Gallagher had been in a San Diego Navy brig while awaiting trial. The president tagged “Fox & Friends” in his tweet. Gallagher's wife, Andrea, and his brother, Sean, repeatedly appeared on Fox News to call the chief a hero and demand his release.

Rep. Duncan Hunter, R-Calif., a frequent Fox News guest who called the military justice system "corrupt," admitted to taking a photo with a dead combatant during his time as a Marine, and essentially dismissed Gallagher’s war crime as normal.

In May, after pardoning a former U.S. soldier convicted in 2009 of killing an Iraqi prisoner, Trump told Fox News that he was "taking a broad look at veterans jailed for battlefield crimes and considering granting more of them similar relief."