Tom Steyer, the billionaire who wants to impeach Trump, is poised to announce a 2020 bid: report 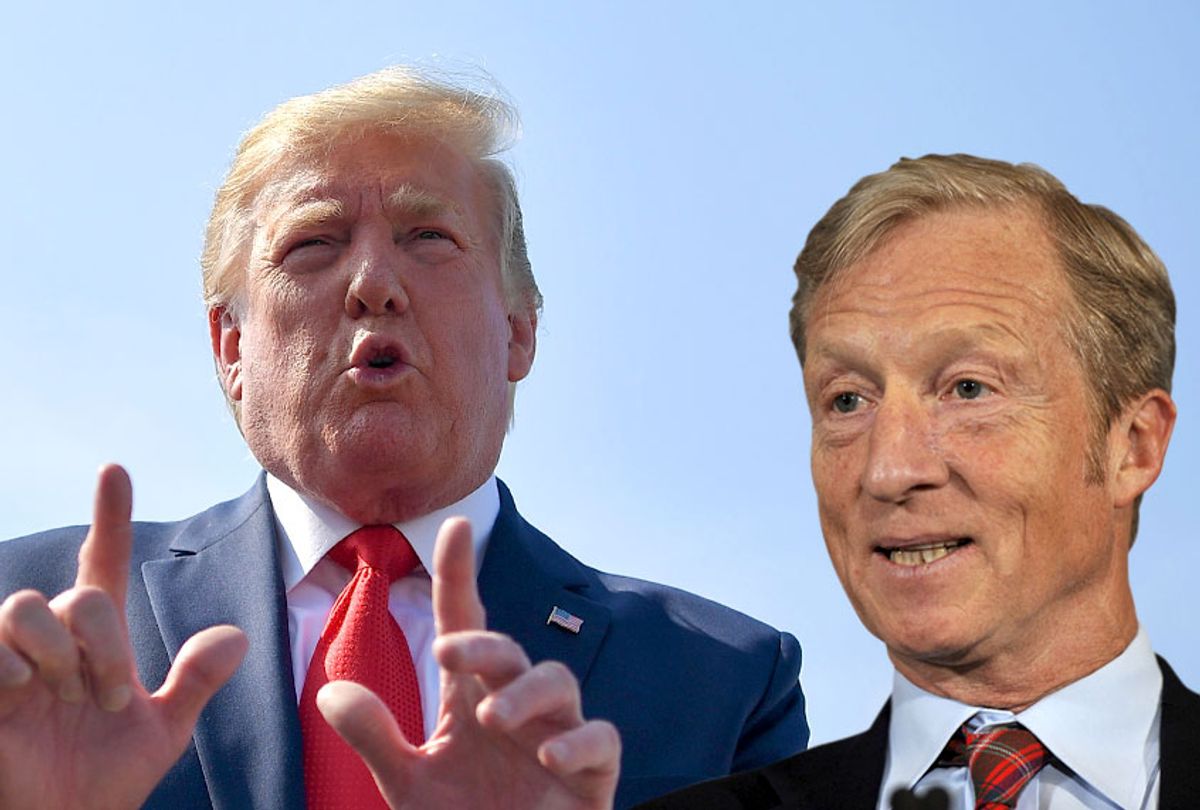 Tom Steyer, the progressive billionaire who has spent millions in a crusade to marshal public support behind impeaching President Donald Trump, is reportedly bracing to mount a different strategy for getting rid of the 45th president — by running against him as a Democrat in 2020.

People familiar with Steyer's thinking say he plans to announce a run for the Democratic nomination in the coming days, according to Politico. Last week, he is said to have held a private conference call with employees at his Need to Impeach, NextGen America and Sacramento offices announcing his decision to throw his hat into the race.

One source close to Steyer said he is "definitely focused on the [fact that the] economy is not as good as people are making it out to be." This is an early indicator that as a candidate, Steyer could pivot from an emphasis on the need to impeach Trump toward progressive economic policies.

While many of Steyer's former employees now work for his soon-to-be Democratic rivals such as Washington Gov. Jay Inslee, the California hedge fund manager is expected to tap Heather Hargreaves, the executive director of Steyer's NextGen America and a Steyer employee of nearly four years, to run his presidential campaign, according to Politico.

The decision to run constitutes an about-face for Steyer, who in January told a group of reporters in Des Moines that "most people come to Iowa around this time to announce a campaign for the presidency. But I am proud to be here to announce that I will do whatever it takes for as long as it takes to remove a president, not because I disagree with his policies — not because we have different ideologies — but because the people must do what our elected officials have been unable or unwilling to do: Hold President Trump accountable."

Speaking to Salon in February about the 2020 presidential race, Steyer said that he believed the next president needs to recognize that America is "at the tail end of the intellectual and moral bankruptcy of the Reagan Revolution, and I think Mr. Trump is the lawless embodiment of that intellectual and moral bankruptcy. So what I'm looking for is someone who can see a positive future for all Americans and can give us a shared vision of how we can continue and expand and improve the American experiment for everybody in this country in the 21st century. I mean, that’s actually what I was trying to do with those five rights, is to say, “If we have this framework, doesn’t that give us the positive framework so that we can pull together, and instead of this being a zero-sum game, understand that together we will produce something much better than we will if we do the Trump style of divide and vilify and don’t prosper?"

He also cited former President Barack Obama's campaigns as examples of what a successful Democratic candidate would need to emulate in 2020.

"If you look at what Barack Obama was able to do, he was able to explain his values and his vision for America to Americans in a way that inspired them," Steyer told Salon. "When I was talking about, what I thought was necessary, I think President Obama did that very well. I think he’s the person of all those people who you listed who won. President Clinton won and he was able to do it. So I don't think they had the same vision. I think they were different times. I think they’ll go down in history differently and stood for different things, but I think what we're looking for now more than ever — even more than in 1992 or 2008 — is someone who can do that, which is stand up for the values of America and give us a positive vision of how to go forward together and inspire people, remind them what it means to be an American, and give us, as I like to say, a reason to get up in the morning with a smile on our faces and spring in our steps."