Ask any cab driver, there's plenty to hate about digitally facilitated piecework, but fortune-tellers love it 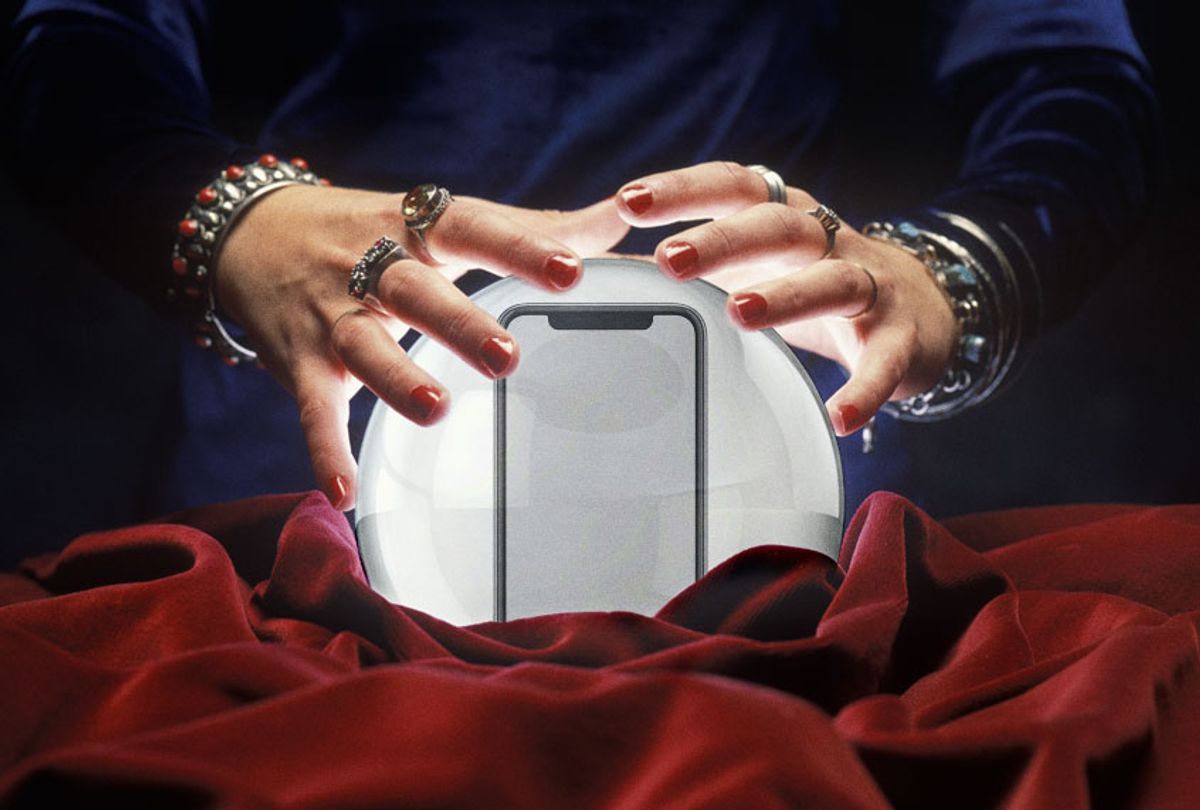 In high school, my friends and I went through a phase. Not a punk one, not a posting "deep" lyrics in our away messages one, but a psychic one. It was the mid-aughts in the Midwest, we had pink razor phones, and we wanted to know if there was actually anything to look forward to other than the annual summer fest. Would we ever move out of the Chicago suburbs? The answers to our questions felt so important to us, but beyond our reach. So the best way to get them was to consult the new psychic whose sign we passed a few times in a town nearby. We were also bored.

I remember the first summer night we visited her. We called ahead to make an appointment and told her it was going to be a group of four of us who all wanted readings. She said it would cost around $45 a person, which for high schoolers, was a lot. I felt nervous as we drove up to her office that was part of a manicured suburban strip mall. On the outside, her parlor looked like everything else in our corner of the world. Inside a bead curtain divided the anteroom from her divining space, decorated with oversized amethyst crystals. The rooms smelled of sage and sandalwood.

This memory came back to me after I received a targeted ad in my Instagram feed last week: for Kasamba, an app where live psychics are available for either chat or voice readings. The former being a text-like chat scenario. So, officially, the app-based gig economy has come for every profession imaginable. I guess that should not come as a surprise since mysticism is no longer fringy: witches have joined the resistance against Donald Trump, and crystal fairs are as common as farmer’s markets — at least in California.

But the gig economy, the replacement of a boss with an app for an on-demand service, has not bode well for all who have turned to it. Uber and Lyft have decimated the ranks of Taxi drivers. TaskRabbit workers have awoken and recognized their exploitation by faceless capitalists. The problem is not only the low wages and high percentages these companies take as a cut, but also the lack of benefits.

But for psychics, mediums, tarot card readers, and spiritual guides, in the ever-growing world of psychic apps that are taking up space in Apple’s app store, digital automation has had a positive impact. Curious, I reached out to mystical workers to see how their business has been affected by the rise in apps. Are they suffering like their fellow gig workers?

Calley Nelson has been reading tarot cards for over 10 years. She never expected to go into business when she was younger, fortune-telling just “kind of happened.” Today, it is her full-time job.

“I mostly read at parties and special events, but I also have a private practice in Brooklyn where people meet with me either in my home office, over the phone or video chat,” Nelson told Salon. Some clients she finds through Gig Salad and Gigmasters, which are apps for entertainers for parties and events.

“My business started unofficially through word of mouth after I graduated college,” she said. “I started reading professionally at a popular Chicago dive bar in the Boystown neighborhood.”

She said people kept asking her where they could find her online, but she didn’t have a website yet. So she made an Instagram. At the time, she was working two jobs: one as a bar back, and the other as a web editor at a healthcare company. “I was apprehensive about putting tarot on my professional editorial website at first so I kept the nightlife version of me separate from my day job,” she explained. A friend recommended that she look into Gig Salad and Gigmasters, which staffs entertainment at parties and special events. Vendors can book the talent through the sites, a similar model to TaskRabbit.

Nelson said she thinks apps can help “elevate spiritual businesses.” For her, she estimates half of her business is coming through apps. Nelson said Gigmasters and Gig Salad have membership fees around $200 for the year. Gig Salad takes a cut depending on your membership. For Nelson, that is a little less than 10 percent. Gigmasters, she said, takes $20 from each event she books. Nelson charges $120 for a 60-minute reading.

Nelson does readings both in person, via Google Hangouts, Facetime, Skype or on the phone. She used to give readings over Instagram for $30 and write out the readings with pictures, but only on request because it took a lot of time. The app Kasamba is more like hotlines where psychics charge by the minute. Kasamba and apps like it, charge psychics a “service fee” which varies for the mode of communication. For each text session with a customer there is a $0.17 per minute charge, on top of that there is an additional fee of 55 percent of the total price is levied. This could explain why some psychics on the app charge $26 a minute.

Rosemary The Celtic Lady, who founded the American Association of Psychics & Psychic Mediums and has been in the business for over 20 years, told Salon she believes the internet and apps have given psychics a platform to reach a larger audience. But she said it has also created more of an opportunity for scammers to do readings — she singles out people on Kasamba, who do readings via text.

“The thing is, to do a proper reading for someone you really need to have a conversation with them and talk to them,” she said. “Get their name, telephone number, and birthday, meditate on them, I don't believe in texting readings because it's an energy thing, you know what I mean? The personal touch is so much better.”

“Proper psychics and mediums have to give themselves time to prepare,” she added.

On the consumer side, the immediacy of getting in contact with a spiritual guide is comforting. Brooke Brumfield uses an app called Saged, which allows consumers to connect with over one hundred of spiritual guides — also referred to as “Sages.”

“The immediacy of connecting with the topic that's top of mind, or finding help on a path through a specific challenge is more easily personalized and much quicker to find guidance on,” Brumfield said. “I can also learn about new spiritual guides and topics that I knew nothing about by connecting with practitioners from around the world, learning more about their individual practice and seeking out their advice.”

Perhaps it is the immediacy that is more important than the experience, which feels so important lately. Fortune-telling is another in-person experience washed away for the sake of instant gratification. As for me, I don’t have plans of seeing a psychic any time soon, but if I do, I will opt for my local one, where I can breathe in sage for an hour. It sounds better than having to send another text.