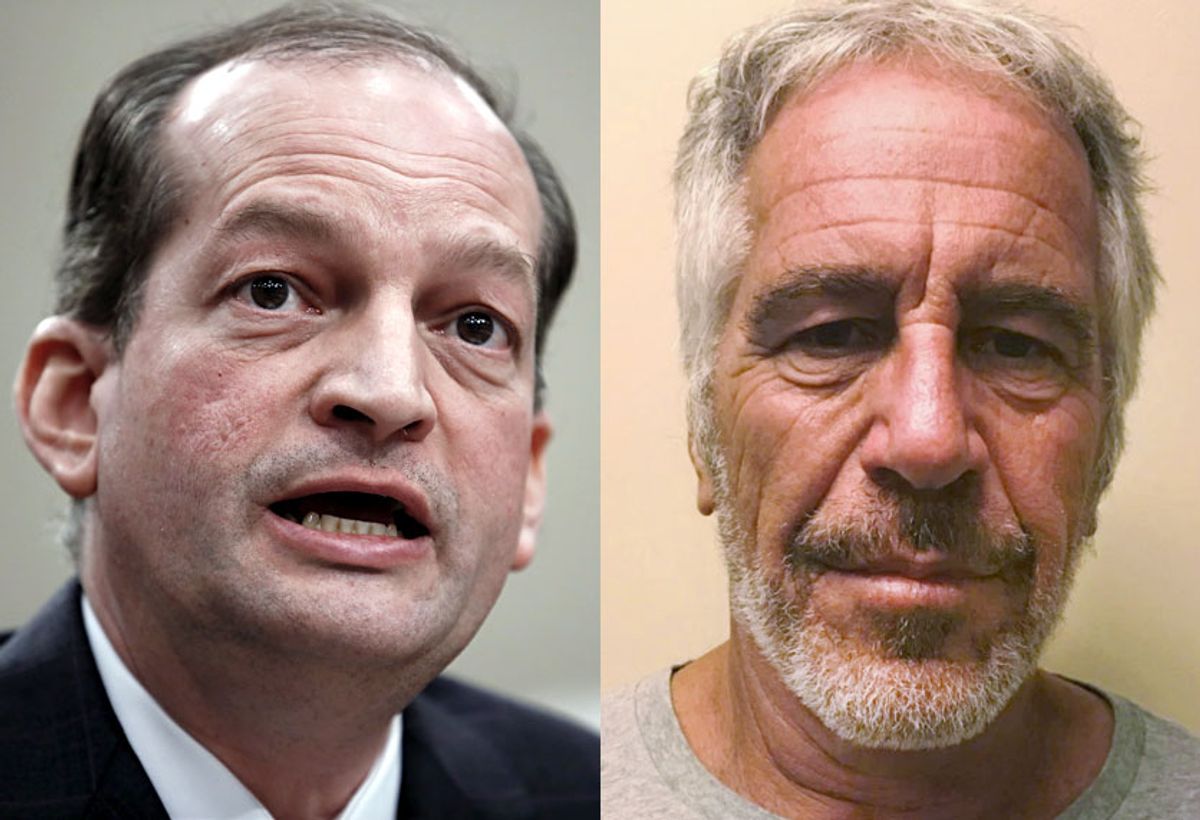 Acosta was the U.S. attorney in Miami who oversaw the federal investigation into Epstein in 2008. Even though investigators identified 36 underage victims and issued a 53-page indictment that could have sent him to prison for life, Epstein was allowed to plead guilty to two state prostitution charges and serve just 13 months in county jail while continuing to work from his office six days a week. A federal judge later found the deal unconstitutional because Acosta had not conferred with the victims after negotiations with Epstein’s lawyers.

Acosta held a press conference Wednesday to defend the plea deal. Acosta claimed that the deal was necessary to ensure that Epstein received jail time because a trial would have been “a roll of the dice.”

“We’ve seen other cases where state prosecutors let folks go with no sentence and people shake their heads. In this case, the federal office intervened before the plea was taken and said, ‘Stop,’” he said. “The Palm Beach state attorney’s office was willing to let Epstein walk free. No jail time. Nothing. Prosecutors in my former office found this to be completely unacceptable, and we became involved.”

Krischer, who served as the Palm Beach state attorney at the time, unequivocally rejected Acosta’s claim, writing that state prosecutors were shut out of the process while Acosta held secret negotiations with Epstein’s attorneys.

“I can emphatically state that Mr. Acosta’s recollection of this matter is completely wrong,” Krischer said in a statement. “The US Attorney’s Office produced a 53-page indictment that was abandoned after secret negotiations between Mr. Epstein’s lawyers and Mr. Acosta. The State Attorney’s Office was not a party to those meetings or negotiations, and definitely had no part in the federal Non-Prosecution Agreement and the unusual confidentiality arrangement that kept everything hidden from the victims.”

“If Mr. Acosta was truly concerned with the State’s case and felt he had to rescue the matter, he would have moved forward with the 53-page indictment that his own office drafted. Instead, Mr. Acosta brokered a secret plea deal that resulted in a Non-Prosecution Agreement in violation of the Crime Victim’s Rights act,” he wrote, adding that Acosta “should not be allowed to rewrite history.”

The details of the investigation and subsequent plea deal negotiations were revealed by the Miami Herald last year, months before Epstein was indicted on child sex trafficking charges in New York. Julie K. Brown, the Herald reporter who investigated the story, also called out Acosta for fudging the facts in his Wednesday news conference.

“He managed to present it in a way that sounds true if you really don’t read the court records and understand the sequence of events,” Brown told CNN.

“If this was such a great deal, and this was the best they could do, why didn’t they tell the victims? Why didn’t they answer the victims’ phone calls?” she asked. “The part about not informing the victims wasn’t written in that agreement.”

During Acosta's nearly hour-long news conference, the labor secretary repeatedly declined to apologize to Epstein’s victims and later appeared to blame Epstein’s light sentence on victims for not speaking out.

Brown debunked the idea that victims were not prepared to speak out. “He had 36 girls who all told the same story, which is amazing,” she told CNN. “I talked to only a handful of them and they all said what the M.O. was.”

The New York Times detailed Brown’s reporting on the case earlier this week, revealing the extent of the information Acosta had when he let Epstein off with a slap on the wrist.

“Early in the process, she received a heavily redacted police report that was more than 100 pages long,” the Times reported, “and mentioned more than 100 Jane Does.”