Are you watching "Love Island"? It's the feel-superior hit of the summer

Sometimes a dating reality series teases us toward the Black Mirror, only to deposit us in a gamification funhouse 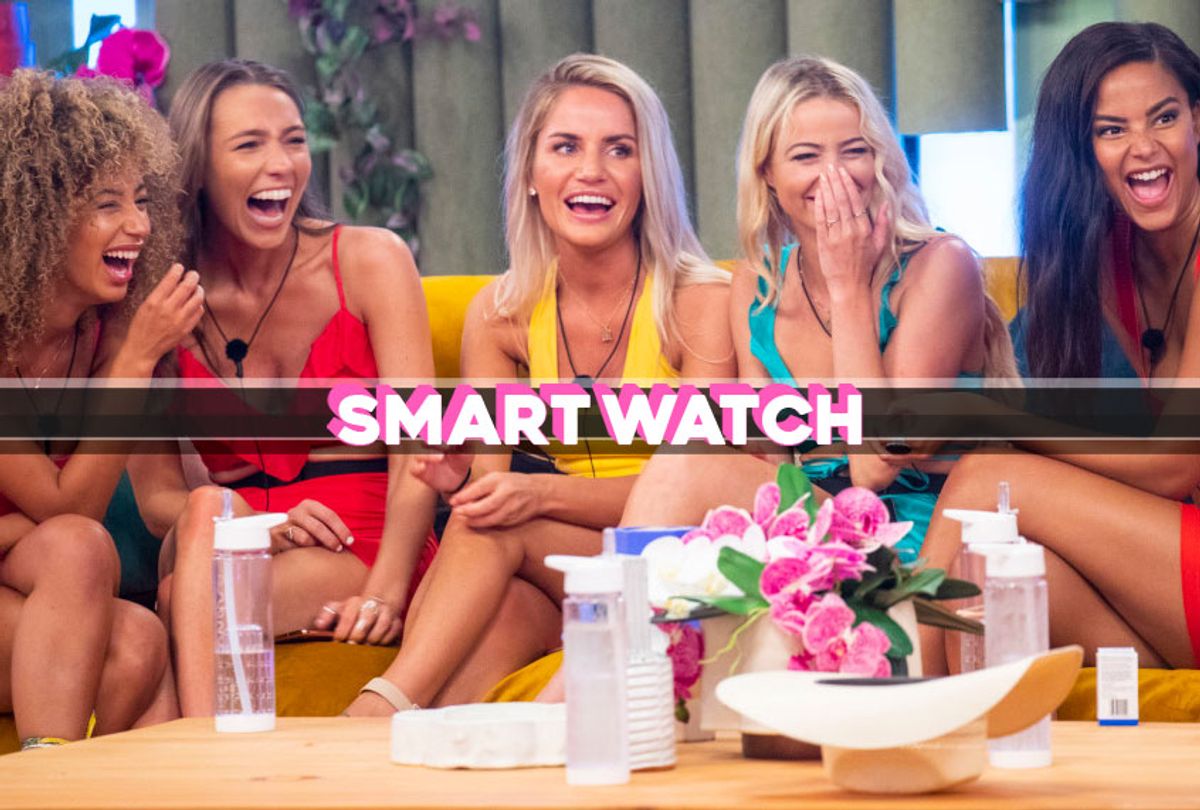 MADtv had this terrific recurring skit featuring outtakes from a fake video matchmaking service called Lowered Expectations. You don’t have to have seen it to get the reference, just picture a galaxy of weirdos showcasing their weirdest qualities to potential suitors.

Lowered Expectations is the dating service of last resort, a option only to be considered when all other efforts have been exhausted. "When you've been blown off by the rest, settle for second best!"

Its modern equivalent is the romance reality series, the summertime variety in particular. Summer TV is nothing but a slew of lowered expectations, evidenced in the sudden breakout of game shows and talent competitions and the annual ritual of digging into “The Bachelorette.”

So when CBS announced it would broadcast an American version of “Love Island,” the international reality hit in which a series of near-naked singles couple up, and swap spit and partners on an island, it sounded like nothing new.

Or so I thought prior to Tuesday night’s East Coast premiere, which inspired a cascade of shocked-to-be-enthusiastic tweets. “You need to watch this,” texted a friend who generally knows better. I couldn’t fathom why, until I actually did.

And I figured out why this dum-de-dum-dum British import has become an international phenomenon that has melted the brains of millions of the Queen’s subjects: It is reality’s ouroboros, a show eating itself alive and letting us know that it finds itself to be mmm, mmm, scrum-delicious.

CBS is stripping “Love Island” episodes five nights a week — five nights a week! —through August 7, and its producers all but announce that it is doing nothing to improve mankind or anyone’s IQ. And you have to appreciate that level of honesty.

“Love Island” also serves as a commentary on the unreasonable expectations we place on dating reality competitions or unscripted romance series, the former employing fakery and manipulation that millions nevertheless buy into, and the latter showing how, in part, those manipulations skew our interpretation of actual intimacy and relationships.

Behind all the craziness of TLC's "90 Day Fiancé," for example, is the all-too-common story of the whirlwind romance and the fairytale promises shattered or deferred, caught on camera. The series is rife with obviously asymmetrical partnerships in which one person is convinced that the horrifying, slow-moving car crash America is watching represents their Last Chance at Love.

And as the recently premiered "90 Day Fiancé: The Other Way" (Mondays at 9 p.m. on what used to be known as The Learning Channel) proves, Americans match terribly in foreign cultures as well. Pity the poor Brazilian woman who became pregnant by a man whose immigration paperwork was denied because of a charge stemming from a past arrest for slashing someone's tires. He casually admitted to being puzzled over the Brazilian authorities dinging him over that mistake — as opposed to his arson charge.

“The Bachelorette” is entirely manufactured, yet somehow it makes the audience invest in a supposed end goal of a proposal that might be over by the reunion episode.

It and “The Bachelor” have been around long enough to influence the average person’s expectations about courtship and romance. "The Bachelorette" made history in its most recent episode, in fact, when its star Hannah Brown refused to eliminate any of the final four suitors. This means all of them go through to the hallowed Fantasy Suite episode, messing up everybody's bracket and making the traditional Nookie Watch that much weirder.

But what is modern romance if not a catalogue of easily enabled choice?

Whereas Love Islanders display no illusions about the integrity of their “journey, or whatever this is,” as one contestant puts it in the premiere.

So what if its nearly-nude contestants are opportunistic living dolls? Each has volunteered to be toyed with, which the audience at home is welcome to do, sure, go ahead!

Each of them can blink their long fake lashes at the camera and profess to being there for “the right reasons,” the topmost being to find “lasting love” because “real romance” has eluded them; hence, they auditioned to sequester themselves in a hormone-driven human Habitrail covered with cameras observing their every move.

If a couple finds that  “love” they’re questing for, or a version convincing enough to fool the public, it (or maybe one of the twosome) will go home with $100,000 as a thank you for their time and dignity.

“Love Island” is different from "Temptation Island” (recently revived on USA Network) and a shade off from Fox’s “Paradise Hotel,” which rebooted in May featuring Kristin Cavallari as its host.

“Paradise Hotel” and “Love Island” share a few key similarities in that, like a sexualized version of musical chairs, the objective is for single people to pair up, and stay paired.

At certain junctures the odd person out is ejected from Paradise, whether that be Fox’s eponymous lodging or Fiji (the American “Love Island” locale).

Its audience participation element mimics the gamification of courtship ushered in via Bumble and Tinder. The audience can put people together on dates and watch the sparks or the hot mess that ensues (and to be fair, “Paradise Hotel” also did this).

But contestants also play with each other, communicating with each other and receiving orders via text in a closed communication system. One of the saddest scenes showed Zac, a grocery cashier who lives with his mom and sisters and looks like the half of Wham! that isn’t George Michael (yes, I mean Andrew Ridgeley, but again: do you even know who that is?), forlornly hiding behind his sunglasses.

Why? His single-serving girlfriend went out on a “date” with another new arrival, an Irish bouncer who joined the fray on night 3 alongside a living loaf of Wonder Bread named Dylan.

The true “Love Island” difference,  is Matthew Hoffman, the goofy narrator.  His blithe commentary on everything happening before our eyes makes the show — and he’s not entirely on the side of the contestants.

Through snide comments pointing out, say, that a white contestant’s terrible attempt to wax Ebonic is wrong and should ever happen again, he’s vocalizing what we’re all witnessing — a dubious statement about the decline of humanity and the death of love.

This also enables CBS to have its cake and eat it too. “Love Island” leads into “Big Brother,” a show that has been blighted in the past with its share of controversial contestant dynamics, including revealing moments of bigotry. “Love Island” probably won’t get that dark, not that we’ll see, anyway.

Even if it does, Hoffman is a release valve, the producers’ way of telling the audience, “yes, we saw that too, and we agree it was dumb. Let’s move on to the next dumb thing.”

Apparently a few U.K. fans of “Love Island” are unimpressed with our guy, but who cares if he’s Iain Stirling?

Show of hands, America: do you even know who that is?

And somehow he lends the whole affair a smug note of … I’m not sure the word is class?… But he does make a person feel better about watching entertainment dystopian enough that we should be pedaling a stationary bike to provide the power required to broadcast it, a la “Black Mirror.”

Here’s how it works: The women arrive first, all squeals and hugs. Once the gang’s all there, the men are marched in, one by one. The ladies can step forward to indicate their interest; however, ultimately the first choice of partners goes to the guy. It’s Tina Fey’s Vagina Auction come to life.

Each of them is TV hot; all the men have six packs, none of the women have cellulite.

Some are noticeably smarter than others. One, as Hoffman points out, really needs to curb her obsession with John Mayer.

An early acting award contender in this first round is Caro, a 21-year-old marketing student initially unsatisfied with her first match, a 27-year-old model and marketing student named Cashel who somehow was presented as the Duff ... and whose ideal woman is ... Tina Fey.

However! At certain turns on “Love Island,” new people arrive to mess with the existing ecosystem, one set in motion by dubious gender dynamics. To wit: on Day 1, 22-year-old Kyra entered the villa, wearing a Bettie Page-style leopard print two-piece, and nervousness ensued. Kyra proceeded to swipe Cashel from Caro, which was most inconvenient for Caro because as soon as Kyra arrived, Caro decided that actually, she was very much in love with Cashel.

Following a weird explosion in which she sounded like a cockatoo that had been dosed with uppers, Caro was subjected with the final indignity: having to sleep alone in the bed she shared the night before with Cashel, as Cashel and Kyra spooned and cuddled and made out in the dark across the room from her.

I forgot to mention that each couple shares a bed, and all couples share one room.

The low stakes are celebrated. The manipulations are in the open. The cold strategy is brazen. Even the challenges have no prizes, as Hoffman explains to the audience after the first one: “It’s just a reality TV mechanism designed to reveal the Islanders’ deepest and dirtiest secrets.” And throw budding romances into rocky shoals. For ratings!

Frothy, goofy, blunt and cynical, “Love Island” is the summertime reality bimbo of series America deserves — hot, temporary, and yet cognizant that it embodies every assumption about the genre's dumbness. Lowered Expectations material? You bet. Before you dismiss that designation, back in the day, Keanu Reeves also fit that qualification. Sometimes beauty and frivolity hides an edge. Even if it doesn't, don't discount the value of simple stupid good time at the end of the day.