Dangers of dating in the Tinder age: "If you called someone you’d probably get labeled a psychopath" 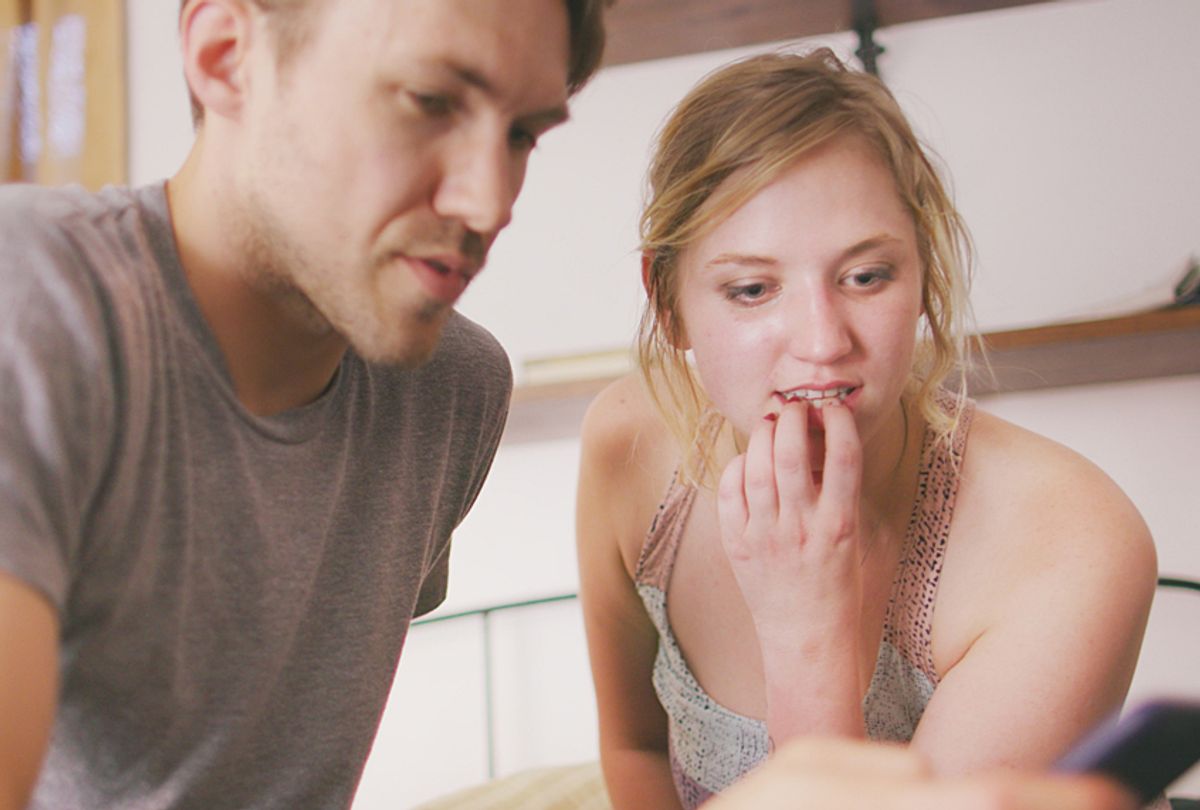 Kyle and Alex in "Swiped: Hooking Up in the Digital Age" (HBO)
--

Midway through "Swiped: Hooking Up in the Digital Age," premiering on HBO Monday at 10 p.m., a middle-aged mother bestows a bit of allegorical advice upon her daughter and her daughter's friend, seated at a stool nearby. The fruit at the top of the tree, mother tells child, is the best. But you have to work for it. The low hanging fruit, or the stuff on the ground, is easier to get but often less desirable, if not rotten.

Her point, she says, is that women don't get rewarded with long term commitment by offering themselves up as if they are items in a catalog.

In response, the younger women silently and stonily look at the elder as if she's spouted two additional heads before their eyes.

"I think older people, like in their 50s and 40s, they don't really get what it means to date now," the daughter shares to the camera, aside from the conversation. She goes on to say that yes, she wants a long term commitment, and kids, all those things her mother had. But the old-school ways of dating — as in, going out and meeting people — doesn't work in the modern age.

Cut to another TV show, Lifetime's scripted series "You," and its disturbing protagonist Joe Goldberg (Penn Badgley), who would beg to differ. In the series premiere Joe and Guinevere Beck (Elizabeth Lail), the object of his affection, meet-cute in a bookstore. She's a graduate student and aspiring poet whose artistic aspirations have been put on the back burner to focus on her degree, or so she says.

He's the store's manager, a well-read romantic. Guinevere — or Beck, as she likes to be called — is addicted to texting, Twitter, Instagram, the digital works. Her phone might as well be glued to her hand.

Joe has no social media presence. He might say that he prefers living IRL. And Joe seems like an old-fashioned guy. The fact that he loves the gritty remnants of old New York, and loves reading books — actual books, with pages and covers and everything! — might lure someone who gleans their romantic education from Nora Ephron romantic comedies into thinking that Joe is a catch.

He is not. In fact, Joe is a voracious reader of a different kind. He reads people. More accurately, he reads what he wants to see in people. This takes on a dangerous focus when Beck crosses his path.

In voiceover, which Badgley delivers with a casual, conversation flatness, he evaluates Beck flirtatiously from the moment she enters the store. It's sweet at first. But then . . .

"Are you not wearing a bra? And you want me to notice!" he thinks to himself (although the audience hears him perfectly) as she reaches for a book. Then, when she chooses to pay for her purchase with a credit card instead of cash, he gets her full name — which, he informs her and us by way of his inner voice, she wants him to have to make it easier for him to look her up online.

Beck's social media presence tells Joe far more about her before they actually meet. Moments after she leaves the bookstore she stops thinking about him. Meanwhile, Joe finds out about her upbringing, her personality, her friends and her boyfriend all by scanning Instagram, Twitter and Facebook.

"The next thing our little friend the Internet gave me was your address," says Joe, the stalker.

Dating and mating in modern times is at best a taxing business, and at worst . . . well, check out "You," airing Sundays at 9 p.m. on Lifetime.

"Swiped," a documentary written and directed by author Nancy Jo Sales, is a very different enterprise in terms of tone, intent and execution than "You." But they are obviously complementary. "You" is a work of fiction based on a bestselling novel by Caroline Kepnes. Watching "Swiped" explains how frighteningly possible it is to cross paths with a Joe Goldberg, and how just about anyone hooked on the intermittent reward schedule granted by Instagram updates or Tinder matches could conceivably fall prey to a guy like Joe, or even become him.

You want to be seen. Known. And heard, Joe says.

You want people to watch, don't you? he asks, rhetorically. This is scripted, courtesy of showrunner Sera Gamble and her writing staff.  But if you have an Instagram account, a YouTube channel, or upload anything to any social media service . . . well, don't you want people to watch? And do you know what data your vacation photos, cocktails snapshots and the rest of it gives away about you — beyond your image, you fashion sense and your personality? It's worth contemplating. You may even want to freak out about it a little more than you have up until now.

"Swiped" is a continuation of an exploration Sales began with her 2015 Vanity Fair story "Tinder and the Dawn of the Dating Apocalypse," one of the articles that was passed around either as an act of commiserating or evidence, among "older people, like in their 50s and 40s," that getting out there was easier in ye olden days of nightclubbing and bar hopping prior to the age of notifications.

Her film follows six young people ranging in age from 18 to 29 as they illustrate the benefits and pitfalls of Tinder, Grindr, Bumble and other apps, in addition to chatting with top executives at those app companies and dating sites such as Match.com.

If you're an "old," I suspect your reaction to it may be the same as mine, which is to say "Swiped" is illuminating, fascinating, depressing and horrifying.

Anyone who's been fortunate enough to spend time with a friend or relative who uses one of the apps — or, more accurately, spending time in their general vicinity while they're staring down at a small screen, swiping, swiping, pausing, then swiping, probably won't be shocked to at what the film reveals and ultimately implies.

Adults between the ages 18-30 spent an estimated 10 hours a week on dating apps, for instance. Not surprising. A Tinder executive celebrates the genius of adding a videogame element to his app, based on variable-ratio scheduling, to make it more addictive. This we know. Check out what your younger relatives are doing at Sunday dinner. They're not looking down because they're praying for an extra-long time.

Well, they're not praying to the deity you may think, anyway.

David Buss, an evolutionary psychologist of University of Texas at Austin, posits that by easily enabling access to hundreds of potential mates to swipe through, "it triggers this short-term mating psychology in a way that never would have been triggered ancestrally."

There are the anecdotes from subjects, who talking about how dating apps make it easier to discriminate or fetishize others on the basis of size, race, or whatever you can imagine. There's the woman whose casual app-enabled hookup culminated in extensive, slanderous online harassment. There's the guy who bemoans being unable to find love, and then finds it on a dating app. I'll leave it a mystery as to how that works out, but here's a hint: remember what David Buss said.

Eventually the series gets around to the safety issues and vulnerabilities people face in using these apps and how they've weakened our sense of boundaries and, in some cases, attitudes towards consent. Those moments are absolutely heartbreaking even if you've heard them before, in some fashion.

Now, you don't necessarily need to watch "Swiped" to be freaked out by "You." Badgley's charm, and the disconnect between his self-aggrandizing, judgmental inner narrative and his actions, achieves that all on its own.

But if you're keeping track, "You" is the latest series featuring how dangerous trusting friends and lovers in the Internet age can be. The show that made Badgley a heartthrob, "Gossip Girl," hinged upon an antagonist who bullied, baited and manipulated a group of rich prep school kids using blog posts and blind text updates.

"You" co-stars Shay Mitchell, previously of "Pretty Little Liars," where she and her friends are endangered and antagonized via mobile phone by an anonymous predator known as "A." Here she plays  Peach, Beck's wealthy, supportive bestie who also happen to be chock full of back-handed compliments.

As Beck, Lail has no such connection to television's history of alerting us to modern technology's potential to expose us to dangers such as privacy invasion and stalking, except for her traditional resemblance to  the damsels in distress from these shows and others. Beck is easily interchangeable with Ashley Benson's Hannah from "Pretty Little Liars," or Blake Lively's  Blair Waldorf, princess of "Gossip Girl," or even the doomed Marissa (Mischa Barton) from "The O.C." She's a waif, waiting to be saved, and loved, and protected. This is Joe's type.

The detail that her given name is Guinevere only sharpens the hunger of a self-declared romantic who, as we eventually find out, chivalrously shares copies of classic books such as "The Three Musketeers" and "Don Quixote" with a neglected kid who lives in his apartment building. That is, when he's not hunting down anyone he thinks may be standing between him and his Beck.

"I just want you to live your best life!" he insists to his love, in voiceover, after he's committed a grisly act. "It's brave what I do for you. It's not easy. It's hard. Sometimes it makes me feel sick. I'm brave!"

The squeamish part about "You" is that even though Joe never ceases creeping us out, he's actually right about the self-obsessed people Beck surrounds herself with. As soon as you meet Beck's not-a-boyfriend, you may actually be anticipating whatever pain Joe is clearly planning to visit upon him. He has that in common with Dexter Morgan.

But "Dexter" had a concrete objective and code that granted that show some built in longevity. It's tough to see how "You" can sustain its story for much more than this season, unless of course Joe wearies of Beck and moves on to another obsession (and a new herd of potential prey annoying enough to slaughter).

Lifetime will never shake its reputation as the home for women-in-peril programming, no matter how many times it rebrands, and in that respect, "You" is a tailored fit.  As for the audience, no matter how magnetic Badgley is there may come a point where his stalker character becomes, for lack of a better term, routine.

The good news is watching "You" won't turn a person off of dating. But it may make a few people rethink their level of exposure, and what they're willing to give up in the opening stages of the mating dance.

And maybe this is evidence of being old, but there is something to what that dismissed parent says. Even one of the younger subjects in Sales' "Swiped" admits as much.

"I do remember when you used to call people on the phone. Like, if you have a crush on someone," he said. He goes on to recall what that was like in seventh or eighth grade, remembering the warm, fuzzy feeling of spending time on the phone conversing, one nervous human voice to another, with a crush.

"That probably doesn't happen anymore," he concluded. "I think if you called someone these days you'd probably get labeled a psychopath."

The wealthy creators of dating apps may be encouraged to know that he believes that. What about you?