Fragile patriotism: Right-wing snowflakes, triggered by any criticism of America 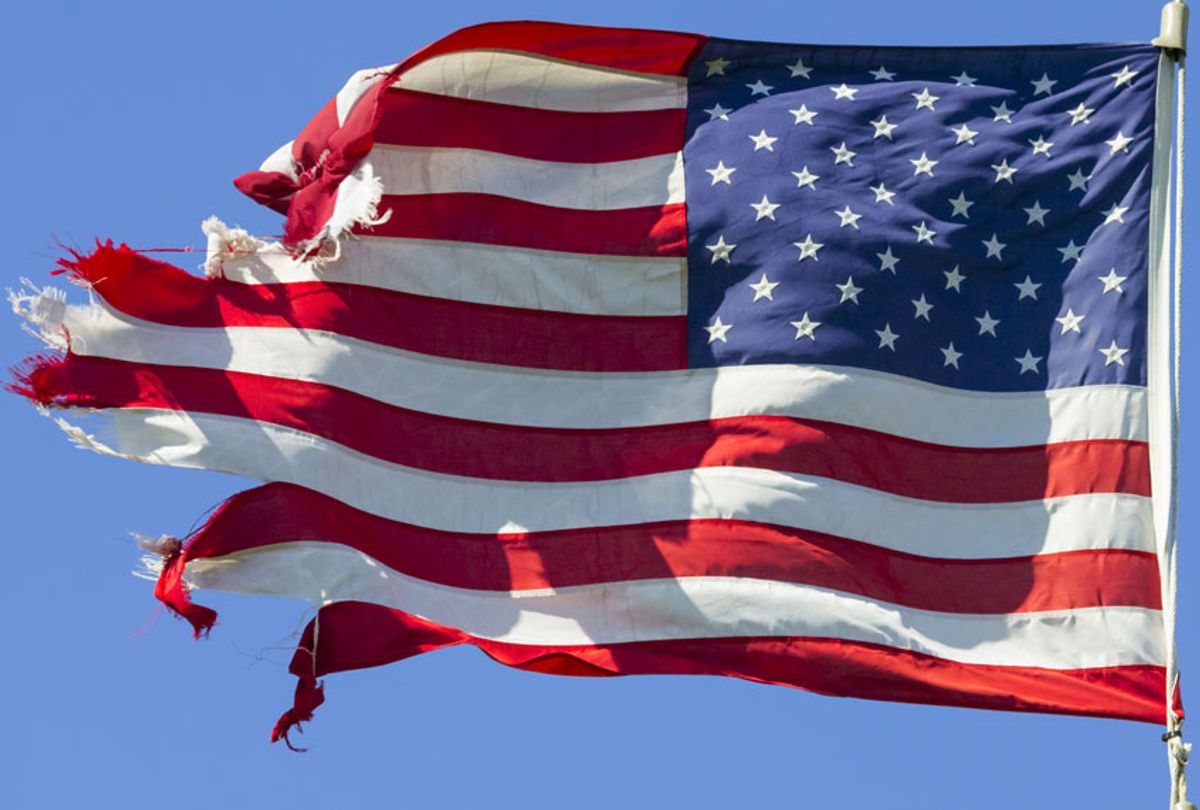 The term "patriotism" may be associated with strength, but at least in the United States, the people who crow the loudest about loving their country are often the most fragile when it comes to expressing that love in a healthy way.

This ongoing problem of fragile patriotism — a phenomenon particularly prevalent among Trump-flavored American conservatives — contributes to many of the most persistent injustices that plague our country.

As with love in interpersonal relationships, love of one's country has to encompass the ability to accept criticism. If you love an individual uncritically, you forfeit your capacity for independent thought and leave yourself vulnerable to abusive behavior. Similarly, if you love your country uncritically, you ignore the sins of its past — and make it more likely that they will recur in the future.

This object lesson was demonstrated for me personally on the Fourth of July, when I published an opinion essay pointing out the overt racism and sexism that marred the events that led to the founding of our country, including the writing of the Declaration of Independence. I noted that Thomas Jefferson had initially considered condemning slavery but then refrained from doing so; that Abigail Adams asked her husband to remember the rights of women when creating his new country but was laughed off; and that the language of the Declaration both directly and indirectly demeaned Native Americans. The purpose of the piece was to simultaneously honor what was right about the Declaration of Independence, and the events that surrounded its creation, while acknowledging its shortcomings.

Many conservatives responded by revealing the fragility of their own patriotism. Infowars editor Paul Joseph Watson tweeted that "it used to be a cliche, but what other conclusion can we draw at this point other than they really hate America?" Jim Hoft of Gateway Pundit called my article "a hateful and inaccurate smear piece," while Josh Hammer of The Daily Wire (with whose editor-in-chief, Ben Shapiro, I recently had a disputatious conversation) described Salon as a nest of "leftist ingrates" who are "profoundly ungrateful."

Famed civil liberties attorney Alan Dershowitz responding to a series of tweets promoting the article from Rep. Ayanna Pressley, D-Mass., by attacking her but not me: "Is this woman out of her mind? The Declaration of Independence was written in 1776! Did she take history in grade school? I think now [sic]." (Dershowitz calls himself a liberal, by the way, but has lately become a prominent defender of President Trump.) Numerous commenters simply expressed outrage that anyone would assert the Declaration of Independence had a racist and sexist history, while others responded with personal attacks against me as a Jew and an autistic person.

It is worth a brief response to the main points made against the article. Is it unfair to apply the standards of 2019 to 1776? Yes and no. Some contemporaries of the document's drafters absolutely wanted slavery to be abolished and women's rights to be recognized. Furthermore, even if that weren't true, the human rights of black people, women and Native Americans were unquestionably being ignored. Is the fact that society was far more racist and sexist than it is now really an excuse?

The founding fathers knew that they were drafting a revolutionary text, not only in the immediate political sense but in terms of its long-term philosophical implications. They were bold enough to go beyond merely condemning King George III — which could have been the extent of what they did — and instead made broad proclamations about human rights. It is to their credit that they went as far as they did, and it's an undeniable fact that they could have gone further but did not.

Another response that frequently popped up was that the Declaration of Independence actually sowed the seeds for the eventual elimination of injustices like slavery. While abolitionists frequently claimed this was the case in order to advance their cause — and other oppressed American groups have likewise insisted that the Declaration's underlying spirit validates their social justice movements — that doesn't mean the founding fathers saw that coming or intended it that way.

Saying that they prophesied the end of slavery, for example, is a classic example of the logical fallacy known as "hindsight bias" or "creeping determinism." Although some of the authors and signers of the Declaration of Independence were quietly opposed to slavery and hoped it would someday be abolished, none of them could have reasonably assumed that was inevitable. There were periods in American history when it seemed like slavery would spread into the Western territories and become a permanent fixture of our economy — that concern led to the creation of the Republican Party — or when it seemed like women would never obtain basic legal equality or the right to vote. Those things only look inevitable in the rear-view mirror. As for the continent-wide genocide against hundreds of Native American tribes and millions of people, I fail to perceive any historical happy ending.

The common theme that linked all the responses to my article, however, was the assumption that if you criticize the Declaration of Independence — even when saying that it had an "overwhelmingly positive impact on history," is "one of the most eloquent and morally moving political documents ever penned" and that without it, "every social justice movement that has followed would never have come to pass" — you clearly hate America. The idea that on America's birthday we can celebrate the nation's greatness while being mindful of its flaws — or we can take a mixed, nuanced view of the founding fathers without despising the country they created — is totally incompatible with the doctrine of fragile patriotism.

There is a danger here, beyond the fact that it risks whitewashing America's past. To understand why, it is helpful to look at the full argument posted by Rep. Pressley in response to the article (and later retweeted by Rep. Rashida Tlaib, D-Mich.)

"The impact of the prejudices, biases & contradictions codified by our founding fathers is still felt today. We continue to struggle as a nation to embrace our full history, one that includes family separation of black families at the auction block & today of migrants at camps," Pressley wrote. "A country that has yet to realize it's full promise for every person that calls it home & indeed makes it great, & yet it is a free country, one where I can resist, offer dissenting & critical opinion & challenge with bold activist leadership. Dissent is the ultimate patriotism, & as such I will continue to be a patriot. On this day, I am grateful for the freedoms afforded me in this country to do so. #resist #HappyFourthOfJuly."

Pressley later added, "'I love America more than any other country in this world, and exactly for this reason, I insist on the right to criticize her perpetually.' -James Baldwin But not only to criticize, to also celebrate & most of all to Work daily in coalition to preserve what is good & working, & to dismantle what is broken while mitigating the hurt caused by broken systems. The Work of progress & realizing a more equitable & just world never stops, but today we pause to reflect & fortify for the Work ahead."

There is a direct line between taking offense at any criticism of the founding fathers and taking offense when modern injustices are pointed out. Insisting on a version of American exceptionalism that claims our history is above reproach — or that its ugliest aspects were minor flaws or anomalies — leads all too easily to turning a blind eye to migrants held in cages, people of color being targeted for abuse by police, or poor people who can't make ends meet because of systemic economic inequality.

But if we view the Declaration of Independence as the imperfect articulation of a perfect ideal — the ideal being that all human beings should have equal rights, equal opportunity and (as Franklin Roosevelt later observed) by implication a decent standard of living — we can honor the document's larger purpose while recognizing its flaws. If the injustices embedded in the Declaration of Independence are viewed as invisible or unassailable, however, then by extension many other injustices become invisible as well.

Hence the fragile patriotism of so much of the right-wing Twitterverse.

Former NFL quarterback Colin Kaepernick provoked similar controversy during the holiday when it was reported that he had persuaded Nike to abandon a sneaker line that included the Betsy Ross version of the American flag, a symbol embraced by some white supremacists. Kaepernick has of course criticized for kneeling during the national anthem as a silent protest against racial injustices by the police. Any form of protest against America's symbols — even when wordless and entirely non-confrontational — is a challenge to fragile patriotism.

The same can be said of others who have drawn attention to America's past and present injustices. Sebastian Gorka, a former adviser to Trump, has accused Rep. Alexandria Ocasio-Cortez, D-N.Y., of hating America because she compared the migrant detention centers at the border to concentration camps. On a deeper level, his complaint was that "she unapologetically supports socialism, hates the founding principles of the United States, and relentlessly pushes identity politics for the purpose of further dividing our country along racial and class lines."

Gorka did not provide any examples of how Ocasio-Cortez "hates the founding principles" of this country, aside from his general references to her criticisms of economic inequalities and racial persecution. Once again, a direct connection is made between criticizing the political or social status quo and opposing the nation's fundamental ideals — an assumption that depends on the perceived infallibility of the founding fathers.

This trend goes even further back then Kaepernick and Ocasio-Cortez, of course. When President Barack Obama apologized to other nations that had been victimized by America's foreign policy in the past, the Heritage Foundation claimed that he had "humiliated" the United States. Civil rights activists in the 1950s and 1960s were routinely accused of being Communists, an accusation that was even levied against Dr. Martin Luther King Jr. (who was hated by the conservatives of his day until his martyrdom made him unassailable). From those decades onward, almost any protesters have been told that if they don't love America, they should leave it.

It's fair to add that leftists can also be guilty of lacking balance in their perspective. I agree with the criticism of historians like Howard Zinn who find "much to condemn in American history, little or nothing to praise" (that's from the New York Times, one of Trump's supposed "enemies of the people"). An impartial look at America's history requires a balancing of the positive and the negative, which is never easy. It is important to remember that America has made progress toward fixing original sins like allowing sexism, racism and poverty — not as much as needs to be done to be a fully just society, but more than many other countries have even attempted.

It is time to start calling out the fragile patriots for being what they are. If they can get away with promoting the idea that criticizing America's founding fathers or other revered historical figures is the same thing as hating America, it becomes that much easier to gloss over the injustices that exist today. Their mentality is meant to silence dissent by letting dissenters know they will be subjected to virulent straw-man attacks whenever they speak out. Even worse, it corrupts Americanism from the inside, turning it from a noble aspiration into an angry, defensive, emotionally brittle cult.

We are better than that. At least, I think so.