"Stranger Things" and the heartbreak of growing up

The middle school pain of feeling outpaced by our peers carries into adulthood, as TV keeps showing us 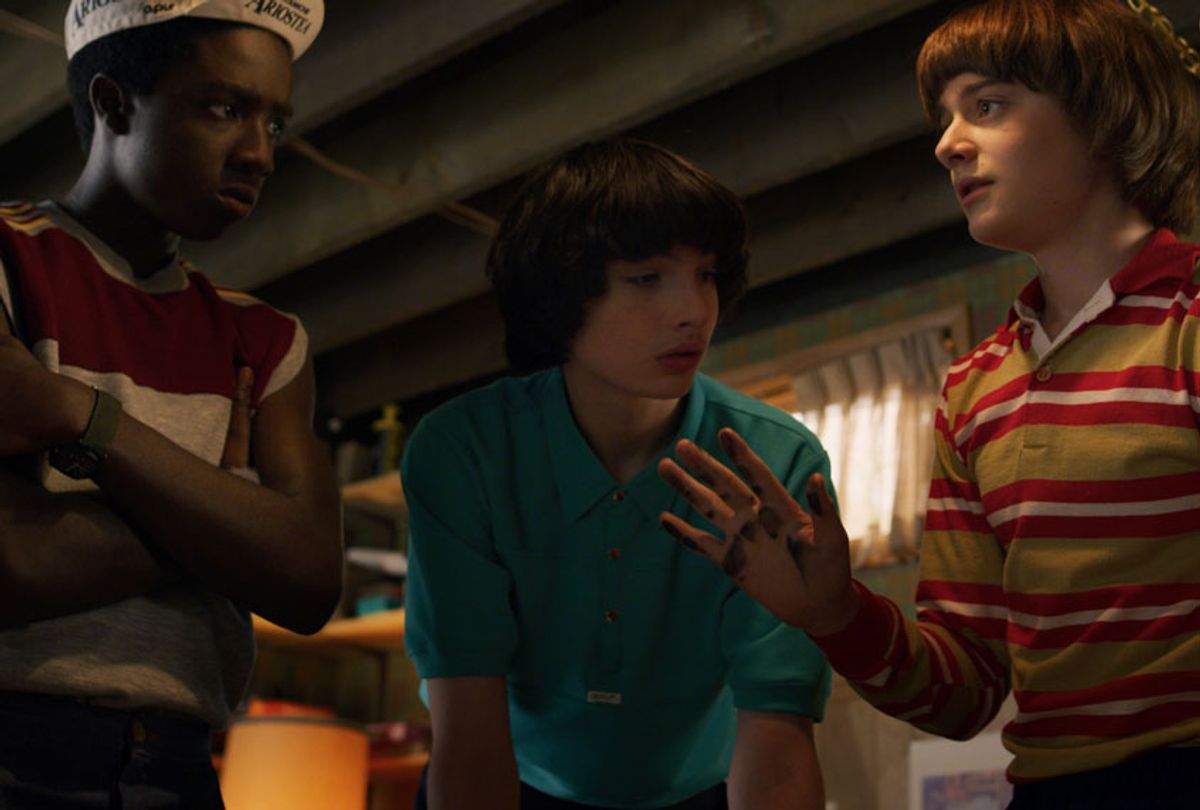 Early into season 3 of “Stranger Things,” Will (Noah Schnapp) punches the “play” button on a portable radio and medieval string music fills the basement. Mike (Finn Wolfhard) and Lucas (Caleb McLaughlin) wake with a start. It’s early, it’s summer and Will — in his purple wizard’s cape and hat — wants to play Dungeons and Dragons.

It’s a game the boys have played enthusiastically for years, imagining elaborate scenarios of danger and rescue before real danger entered their lives and Hawkins, Indiana. But this summer, things are different. Mike and Lucas have girlfriends and are completely preoccupied, and while Will the Wise declares the day one without girls, every time the phone rings, they rush for it, hoping El (Millie Bobby Brown) or Max (Sadie Sink) is on the other end.

After Mike and Lucas begin lightly mocking Will’s campaign, he races up the stairs, angry and confused. Mike follows him and they begin to argue.

“We’re not kids anymore,” Mike says. “I mean, what did you think, really? That we were never going to get girlfriends? We were just going to sit in my basement and play games for the rest of our lives?”

It’s a subtle, aching moment in a season bursting with intrigue and humor — and one that is heartbreaking in its relatability. There’s a certain point in everyone’s adolescence when it feels like you’re consistently making a series of choices that result in you either being left or leaving someone behind.

Exploring this tension through creative work isn’t new; one of the most touching subplots of L.M. Montgomery’s 1908 novel “Anne of Green Gables” was Anne’s fear, and ultimate acceptance, of the idea that her best friend Diana would grow up without her. (After the infamous raspberry cordial incident, Anne said: “I love Diana so, Marilla, I cannot live without her. But I know very well when we grow up that Diana will get married and go away and leave me.”)

But we’re seeing it explored in new ways, many that are equal parts cringeworthy and tender, with the advent of some thoughtful shows whose main characters are caught navigating that cruel transition from pre-teen to teenager at different paces.

“Pen15” is a show built on this premise. Maya and Anna (the show’s creators Anna Konkle and Maya Erskine) enter 7th grade determined to experience all their “firsts” together, up to and including getting to third base. But throughout the series, the two 13-year-olds’ relationship weathers a constant imbalance; when one pulls ahead on the arbitrary middle school maturity scale — periods, first kisses, parents’ divorces, AIM romances, thongs — the other stalls with their shared collection of Sylvanian dolls.

Regardless of whose ahead, there are feelings of guilt and isolation, but by the end of the first season, the girls reach a shared emotional plea: “Don’t leave me.”

That sentiment guides the first episode of “Big Mouth,” the raunchy animated Netflix that follows a cast of 7th graders whose lives are complicated by the advent of puberty delivered at the hands of Hormone Monsters.

After Nick (Nick Kroll) accidentally walks in on his best friend Andrew (John Mulaney) as he’s changing at a sleepover, he finds out they are physically developing at different rates. What follows is a confusing rush of emotions — jealousy, inadequacy and the obvious, but hurtful, realization they aren’t the same.

Nick begins lashing out at Andrew; Andrew retaliates. Things finally climax at the school dance (minutes after Andrew literally ejaculates in his pants and attempts to rinse them off in the toilet).

“Why are you being so mean to me?” Andrew asks, dripping with toilet water. “You’ve been mean to me all week, what did I do?”

Everything is embarrassing, the boys determine; everything in middle school, everyone changing at different rates, is so embarrassing. It’s a theme that appears over and over again throughout the series, like in the episode where Jessi (Jessi Klein) holds a sleepover in effort to become close to the popular girls, the viciously catty Devin (June Diane Raphael) and her dim pawn, Lola (Nick Kroll, recycling his voice from the PubLIZity sketches on the “Kroll Show”).

She initially invites Missy (Jenny Slate) so she’ll have another “smart girl” to spend the night with, but then the talk turns to boys. Devin has a boyfriend, Jessi and Nick are potentially an item, but Missy’s idea of a fantasy man is Nathan Fillion from “Firefly.” Devin mocks Missy, and Lola and Jessi joins in.

Missy finally declares at the pinnacle of the evening, sick from too much sugar and humiliated, “This will be my harrowing ‘Moth’ story.”

I think about that line a lot.

There’s a point of adolescence where you’re suspended between the lure of adulthood and the fear of childhood — which is the only reality you’ve ever known — slipping away, and all around you, there are people making that transition without you. That moment in time doesn’t last long, but it’s so poignant, many of us remember well into adulthood (well enough in some instances, as Missy noted, that we could take to the stage and tell stories of it).  Perhaps that’s why showmakers come back to it again and again, writing through that moment and allowing viewers to relive it, only now with the life perspective many of us wish we had at age 13.