NeverTrumpers, let's talk: We want your help, but so far your advice sucks

There's room for the NeverTrump contingent. But if their advice is "Stop being Democrats," that ain't working 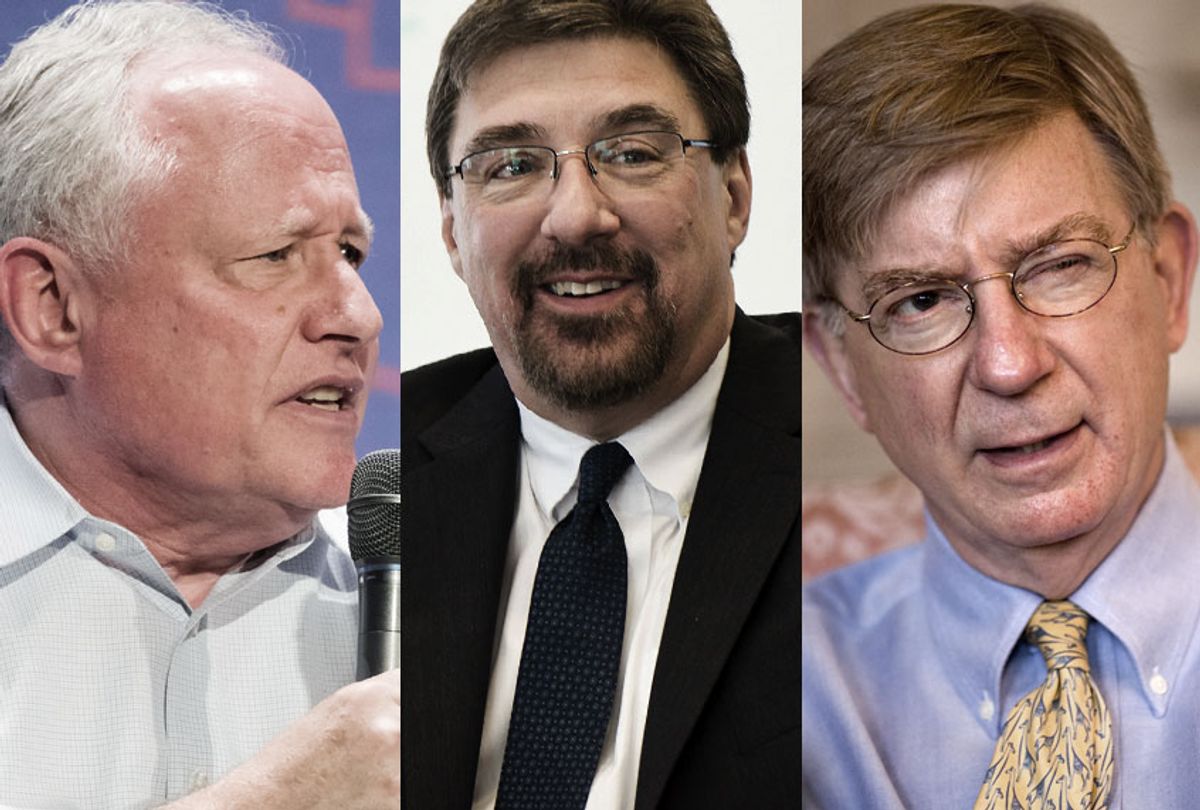 Unusual times demand unusual measures. If you value Salon's original reporting and commentary, please take a moment to support our writers directly. Right here, right now, you can make a direct contribution to Bob Cesca to help make his work possible. Every dollar you give goes straight to our writers — Salon doesn’t take a cut.

Over the past few weeks, you may have noticed that the NeverTrumpers — repentant Republicans and conservatives — have been offering up lots of advice for how the Democrats can win the next election. Their jackhammer advice has basically been limited to urging the party to disavow its activist, progressive members in order to secure the contrarian swing voters who cast ballots for Barack Obama twice, then switched to Donald Trump in 2016.

Before I offer up a come-to-Jesus moment for the NeverTrumpers, let me say that as many of you know, I’ve defended members of this exiled faction in the past, and continue to stand by the idea that we need to form a coalition to close the loopholes exposed by Donald Trump’s malfeasance as a means of preventing another, perhaps more dangerous monster from sashaying through the Trump-shaped hole in the wall. To be clear: I’m not talking about conceding on policy or platform planks. I’m merely suggesting a detente between voices who all agree that Trump is a menace and his presidency is an existential national crisis.

By the way, while I’m here, there’s also an electoral motive behind finding a Venn-diagram overlap with the NeverTrumpers. Specifically, elections in this era are decided by a few percentage points, raising the salient question: Can Democrats afford to marginalize any voters, irrespective of where they land on the spectrum? This is as much a question for Nancy Pelosi and Rick Wilson as it is for “the Squad,” Alexandria Ocasio-Cortez and her allies.

Benefit of the doubt: The NeverTrumpers mean well, I guess. They want to defeat Trump as much as we do. Perhaps their motives for doing so aren’t precisely the same as ours, but motives don’t matter as long as we’re all pulling the same levers on Nov. 3, 2020.

Nevertheless, the approach the NeverTrumpers have taken on Twitter, and in various op-eds for The Bulwark is to hector Democrats to fully accept their advice — or else. Too often, these tips are presented alongside brags about how the NeverTrumpers have pantsed the Democrats for decades. We need to cloak our nominee in their conservative drag because, they say, the Democrats are too feckless to find 270 electoral votes with a flashlight and GPS. It isn't quite the brand of outreach that makes friends or wins acolytes.

Unless we obey the NeverTrumpers, they argue, we’ll just keep on being losing losers who lose, re-electing Trump. Their acidic tone secondarily renders any coalition between these disaffected former Republicans and the rest of the anti-Trump Normals an impossibility, augmenting the chances of more Trumps. My coalition idea is already a non-starter in many liberal circles due to the inartful tone with which these handy-dandy tips have been doled out.

What I’m hearing, generally, among NeverTrumpers is a form of defeatism that only actually helps Trump. Either the Democratic Party accepts a centrist nominee and a watered-down platform, or we’re all screwed — and it’ll be the party’s fault for being filled with nincompoops. Thanks, guys, but that’s not quite how it works.

The NeverTrumpers aren’t greenhorns by any stretch, so they ought to know by now that big-tent party politics is a constant plate-spinning act. Those of you who remember the "Ed Sullivan Show" might recall the vintage variety-show performers who spun dinnerware on pointed sticks. The idea was to keep every plate spinning for as long as possible. Pay too much attention to any one plate, and the others start to wobble and crash.

Here's a related fact: there were five Senate races and 45 House contests last year that were decided by less than five percentage points. If the party spends too much time and money cajoling the middle, the left will start to wobble — and vice versa. Lose the left and a repeat of 2016 becomes a possibility, with the Greens or some other kittywampus third party picking up election-deciding votes in Ohio, Pennsylvania, Michigan and Wisconsin.

The key to winning in 2020, or any election, for that matter, is successfully keeping all the plates in motion, thus manufacturing a semblance of party cohesion — keeping the middle, the center-left and the left as happy as possible.

While it would be outstanding if the Democrats could attain party cohesion by prioritizing Trump as the unifying enemy, it’s not as simple as that. USA Today’s Chris Truax observed this week: “Democrats are already guaranteed a nominee that will excite their base and drive a big turnout. His name is Donald Trump.” I truly wish that were so, I assure you. See also my previous Green Party remark. Trump was on the ballot in 2016, too, and yet Jill Stein won enough votes in Pennsylvania, Michigan and Wisconsin to award those states and their electoral votes to Trump, chiefly because Stein voters believed Hillary Clinton wasn’t enough like Bernie Sanders.

I agree wholeheartedly that Trump should be the prime mover for the entire Democratic tent to unite and turn out in record numbers, but my confidence in such an outcome is less than stellar, given what happened last time. The fact remains that in a world of wafer-thin margins, even the slightest lack of energy here or there could spell disaster. That means the plate-spinning has to be executed with laser-focused attention on every plate.

Former Reagan and George H.W. Bush policy adviser Bruce Bartlett has the right idea. Not too long ago, Bartlett warned:

I think the strongest political argument for nominating a progressive over a moderate is that, whoever the Democratic nominee is, he or she will be painted by Fox, Trump and the rest of the right-wing echo chamber as far, far left, a socialist. A moderate cannot parry these charges except by moving right, which will be disastrous. An experienced progressive will be far better able to respond to right-wing attacks, in my opinion.

Knowing that Trump and his allies in the GOP will accuse any Democrat, including Joe Biden, of being a Venezuela-style socialist, a move to the right will be seen as weak and compliant, turning off the base and many former Obama supporters like me. Conversely, the only viable response is to simply own the position. Don’t hesitate. Don’t apologize. This isn’t quite what we’re hearing from the NeverTrumpers because, I presume, being an unapologetic Democrat is (in their view) by definition a losing posture.

Americans want leadership above all else. Democrats fail on this front when they vacillate and apologize for believing what they believe. But when Democrats show leadership and backbone and stand up for what they believe, they win, even in red states. Barack Obama won Indiana and North Carolina in 2008, two states that even Democratic strategists didn't believe were in play. He won an electoral vote in Nebraska, typically viewed as among the reddest of red states. None of that happened because he ran to the right. It was because he displayed leadership and strength in the days after the October crash of the financial markets, and never once backpedaled on his values while endeavoring to win those bright-red electoral votes.

Badgering Democrats to shift rightward, and insulting anyone who dares to reply with questions, concerns or counterpoints, won’t win any Democratic supporters for the NeverTrumper plan, regardless of how well intentioned it might be. Indeed, the NeverTrumpers' effort to help is only hurting Democratic prospects by calling attention to what they see as the party’s flaws, while reinforcing the stereotype that the party is wired to lose. I can’t imagine why Democrats are bristling at their advice. Similarly, if I were presumptuous enough to direct traffic at a meeting of the Freedom Caucus, prefaced with a you-people-suck-without-me posture, I’d surely only last a few seconds before being shouted out of the room.

I mean, Democratic skepticism in the face of these new kids at camp is warranted. Through their years of electoral expertise, they ended up manufacturing a rainbow bridge for the rise of George W. Bush, Sarah Palin, Fox News' prime-time lineup, the Tea Party and eventually Trump. If we’re not as open-armed as they’d like us to be, perhaps these are some of the reasons why.

All told, we’re not breaking any news in concluding that the 2020 election is an all-hands-on-deck emergency, and that every vote against Trump counts, no matter where it comes from. That means there’s zero latitude for allowing any plates to fall. (It also means AOC and Nancy Pelosi need to declare a ceasefire, like, yesterday.)

Consequently, here’s the kind of help the Democrats need from NeverTrumpers. It’d be immensely useful if these guys, many of whom are former strategists, took on the role of the metaphorical Bothan Spies, showing us the location of the Death Star’s thermal exhaust shaft, rather than simply hectoring Luke Skywalker for turning off his targeting computer. In other words, the NeverTrumpers possess unique insights into the internal workings of the Republican Party machine. Show us the plans, then. Show us the weak spots. Show us how to outflank their media strategy, how to nullify the impact of their propaganda, how to spike the Republican guns — and how pull it off without urging the Democratic Party to sell out its values or its progressive platform, weakening Democrats as viable leaders. Show us how we pull it off without nagging and insulting the people the NeverTrumpers are trying to convince.

Clearly, Democrats want to defeat and humiliate Trump, yes, but we want to do it with our heads held high, rather than defeating Trump by becoming just a little more like him in order to appease regional voters — who as I see it, ultimately want to support a party that knows what it is, a party that’s confident in its platform.

If you want to help the Democrats win, NeverTrumpers, then help. But so far, it's not working. Your defeatism, your inattention to big-tent politics during a primary, and your caustic tactics are only inflicting damage. Whose side are you really on?