Appointed by a GOP president, the third-longest serving Supreme Court judge proved to be an outspoken liberal 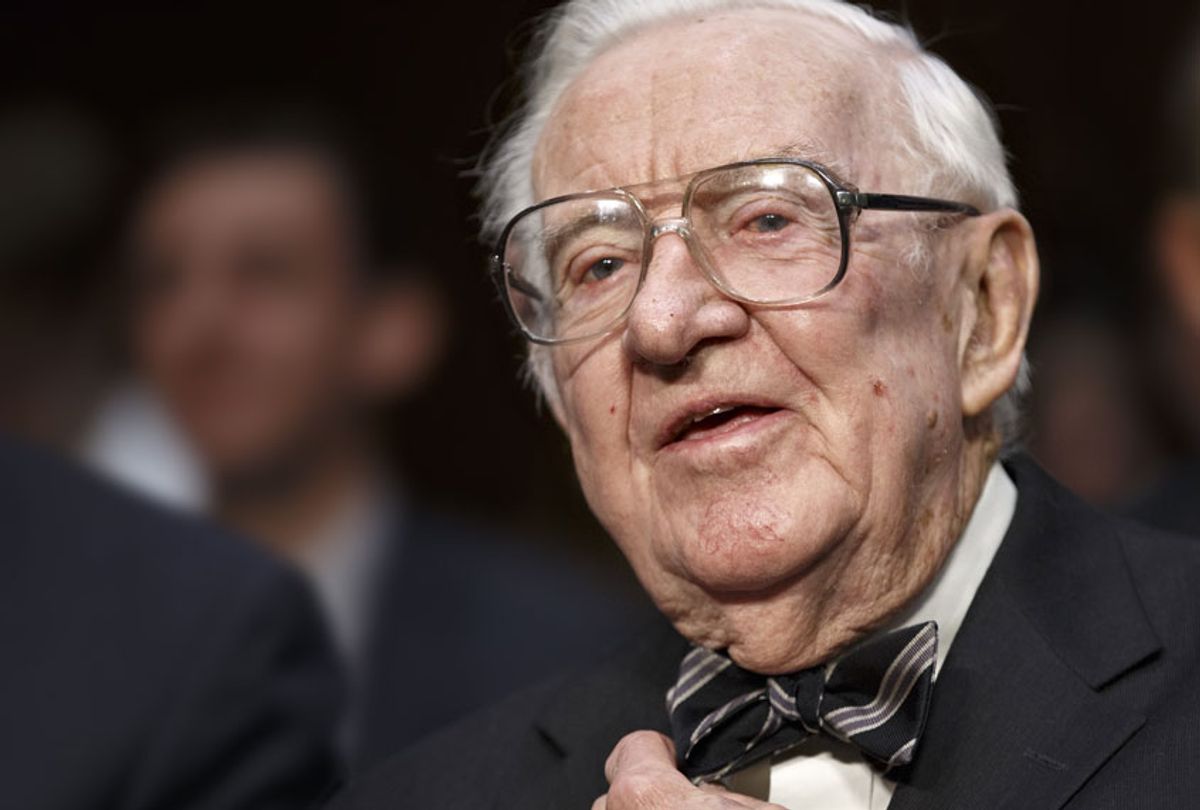 John Paul Stevens, one of the nation's longest-serving Supreme Court judge who surprised the nation by leading the bench's liberal wing despite being appointed by former Republican President Gerald Ford, passed away Tuesday at the age of 99.

Stevens died in a Fort Lauderdale hospital following complications from a stroke he suffered on the previous day, according to the Washington Post.

Because he served as a judge for such a long period of time, Stevens was able to leave his mark on a number of areas of law, with the Post including "government regulation, the death penalty, criminal law, intellectual property and civil liberties." Yet even though Stevens began his tenure as a moderate, he closed his career as an outspoken liberal, writing famous dissents in the cases of Bush v. Gore in 2000 and Citizens United in 2010, as well as arguing for the repeal of the Second Amendment in a New York Times editorial last year.

In the 2000 dissent, Stevens heavily implied that the five Republican judges who ruled to halt Florida's vote count and thereby elect former President George W. Bush over former Vice President Al Gore were doing so for blatantly partisan reasons that effectively disenfranchised Florida voters and undermined public confidence in the impartiality of the bench.

"Time will one day heal the wound to that confidence that will be inflicted by today’s decision," Stevens wrote. "One thing, however, is certain. Although we may never know with complete certainty the identity of the winner of this year’s presidential election, the identity of the loser is perfectly clear: It is the nation’s confidence in the judge as an impartial guardian of the rule of law."

A decade later, Stevens scathingly dissented from the Supreme Court's Citizens United ruling, which held that corporations were people when it came to the question of independent expenditures for political communications.

"In the context of election to public office, the distinction between corporate and human speakers is significant," Stevens wrote. "Although they make enormous contributions to our society, corporations are not actually members of it. They cannot vote or run for office. Because they may be managed and controlled by nonresidents, their interests may conflict in fundamental respects with the interests of eligible voters. The financial resources, legal structure, and instrumental orientation of corporations raise legitimate concerns about their role in the electoral process."

He added, "Our lawmakers have a compelling constitutional basis, if not also a democratic duty, to take measures designed to guard against the potentially deleterious effects of corporate spending in local and national races."

Stevens did not entirely quiet his voice after retiring from the bench in 2010. Last year, he wrote an editorial for the New York Times, in which he argued that the Second Amendment needed to be repealed because its original purpose had been corrupted by activist judges and the National Rifle Association.

For over 200 years after the adoption of the Second Amendment, it was uniformly understood as not placing any limit on either federal or state authority to enact gun control legislation. In 1939 the Supreme Court unanimously held that Congress could prohibit the possession of a sawed-off shotgun because that weapon had no reasonable relation to the preservation or efficiency of a “well regulated militia.”

During the years when Warren Burger was our chief justice, from 1969 to 1986, no judge, federal or state, as far as I am aware, expressed any doubt as to the limited coverage of that amendment. When organizations like the National Rifle Association disagreed with that position and began their campaign claiming that federal regulation of firearms curtailed Second Amendment rights, Chief Justice Burger publicly characterized the N.R.A. as perpetrating “one of the greatest pieces of fraud, I repeat the word fraud, on the American public by special interest groups that I have ever seen in my lifetime.”