Whose country is "broken and crime infested," Mr. President? Spoiler: It's ours 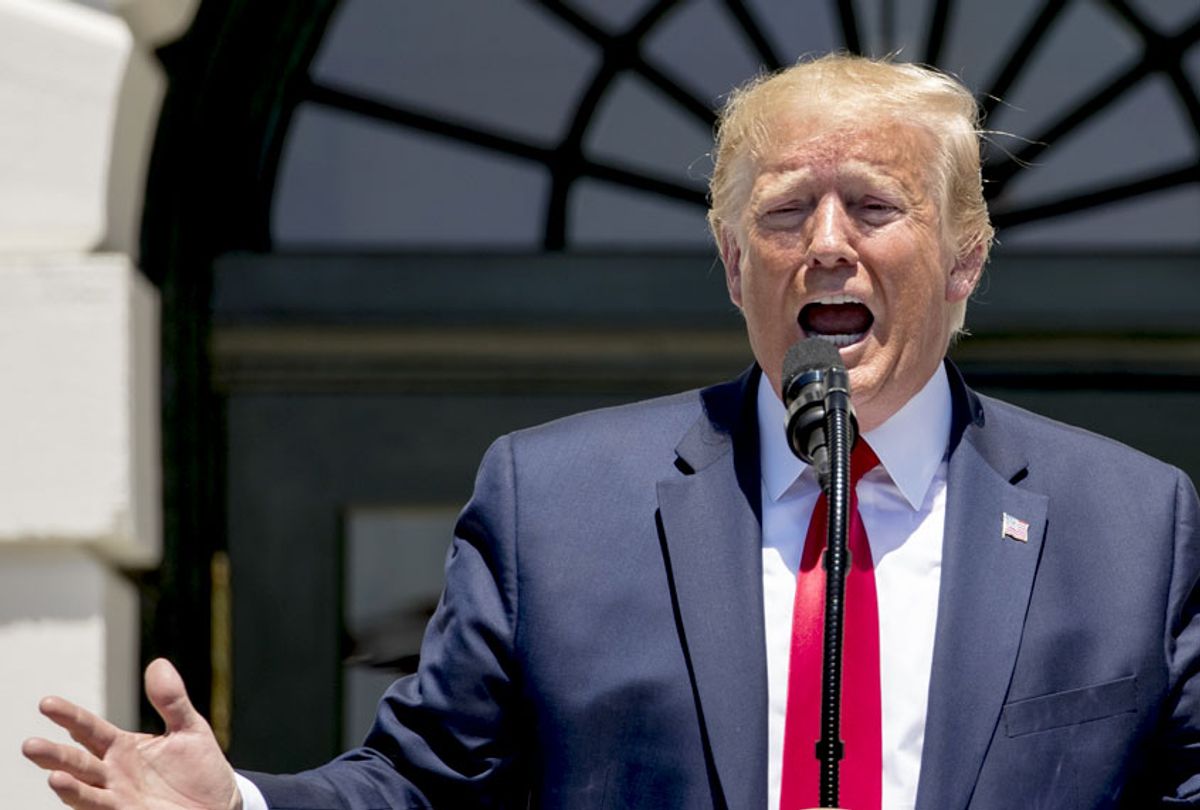 President Donald Trump speaks during a Made in America showcase on the South Lawn of the White House in Washington, Monday, July 15, 2019. (AP/Andrew Harnik)
--

President Trump often puts thoughtful Americans in the position of choosing whether to concentrate on his racism or stupidity. Since the two mental pathologies typically interlock, the choice is not binary. The latest incident of imbecility from the White House — as almost everyone knows by now — has Trump excoriating four congresswomen (Alexandria Ocasio-Cortez, Ilhan Omar, Ayanna Pressley and Rashida Tlaib), three of whom were born in the United States, to go back to the countries where they came from. Rep. Omar of Minnesota, the only non-native born citizen in the group, arrived in America as a refugee at age 10, and has studied, worked and lived here ever since.

Stumbling and sputtering under the blindness of his own hatred and ignorance, Trump might have actually fallen into an honest and accurate assessment of the United States. He not only told the congresswomen to go back to their countries of origin — for three of them that means staying right where they are — but described those places as “broken and crime infested.”

Unique in the developed world, thousands of Americans die every year for lack of health insurance and medical debt is the No. 1 contributor to bankruptcy in the United States. The “greatest nation in the world,” to use Trump’s phrase from his recent exercise in derangement (otherwise known as a press conference), also has a higher infant mortality rate than every other comparably wealthy country, and even higher than many countries with far fewer resources, like Bosnia, Taiwan and Malta.

Deaths from suicide, alcoholism and drug addiction have all dramatically escalated in the United States, especially among the poor. The majority of American families living below the poverty line qualify for the classification of “working poor,” meaning that one or more members of the household are employed. Income is often attached to educational attainment, and the United States currently ranks seventh in literacy among the world’s nations. The Organization for Economic Cooperation and Development found that 50 percent of U.S. adults cannot read a book written at an eighth-grade level.

Living without health care, without the ability to understand complex information and without adequate means to provide for the basic needs of your family makes life rather precarious, but in many parts of America, merely walking or driving presents several dangers. The American Society of Civil Engineers grades U.S. infrastructure as a D-plus.

Despite Barack Obama’s promises of “shovel-ready jobs,” and Trump’s bloviation about “rebuilding our country,” the government has taken relatively no action to improve the safety conditions for America after the levees of New Orleans, weakened from years of neglect, cracked under the pressure of Hurricane Katrina, flooding the entire city and causing many people to lose their homes and businesses. Enlarging the circle of casualties of American failure, high levels of lead contamination in the water of Flint, Michigan and East Chicago, Indiana, led to many children suffering brain damage.

Death from the cruel negligence of a profit-driven health care system, widespread illiteracy, little hope for the poor and crumbling infrastructure certainly make the United States appear “broken.” As surreal as it remains, Donald Trump is president of the United States. When he speaks, he should understand that it is his responsibility, working in cooperation with other bodies and officials of government, to repair, renovate and restore. In other words, to “make America great.”

The dysfunction and corruption of American society extends beyond its institutional mechanisms and infects its leadership. A 2014 study from the American Political Science Association famously lamented that “Multivariate analysis indicates that economic elites and organized groups representing business interests have substantial independent impacts on U.S. government policy, while average citizens and mass-based interest groups have little or no independent influence.”

If the rich want a tax break, they are likely to get it, while poor people dying of treatable diseases, or working like dogs to barely feed themselves, will have to learn to survive on a Serengeti Plain. Trump himself underscored the real loyalty and anti-democratic priority of American governance during his press conference when he repeatedly emphasized the record-setting numbers of the stock market. The richest 10 percent of Americans own 84 percent of all stocks, and as countless studies attest, wealth does not “trickle down,” it calcifies. Income inequality is more extreme in the United States than any other democratic country.

Trump not only described the birth country — the United States — of three of the four congresswomen as “broken,” but also “crime infested.” Crime rates have consistently declined in the United States over the past three decades, but comparisons to other counties make “Freedom’s Land,” as Gore Vidal liked to call America, resemble the hellscape images of a dystopian novel. In 2017, there were 17,284 murders in the United States. There were 660 in Canada. Nearly 30 Americans per 1 million die by firearm homicide, whereas only 5.1 per million Canadians are shot to death.

"Active shooter" drills in elementary schools are routine, because not even children are safe from violent massacres. When the next school shooting takes place, the predictable debate will ensue over whether gun regulations or cosmic petitions will solve the problem, and if history provides any indication, silent pleas to the supernatural will prevail.

Donald Trump, whose rancid presence in the White House is sufficient to prove that his country is “broken and crime infested,” instructed Reps. Ocasio-Cortez, Omar, Pressley and Tlaib to “fix the places from which they came.”

That’s exactly what they are doing.