Ilhan Omar takes up the BDS fight, and conflicted Democrats moan and bicker

Omar isn't backing down, and now tackles an issue where moderate Democrats sound exactly like Republicans 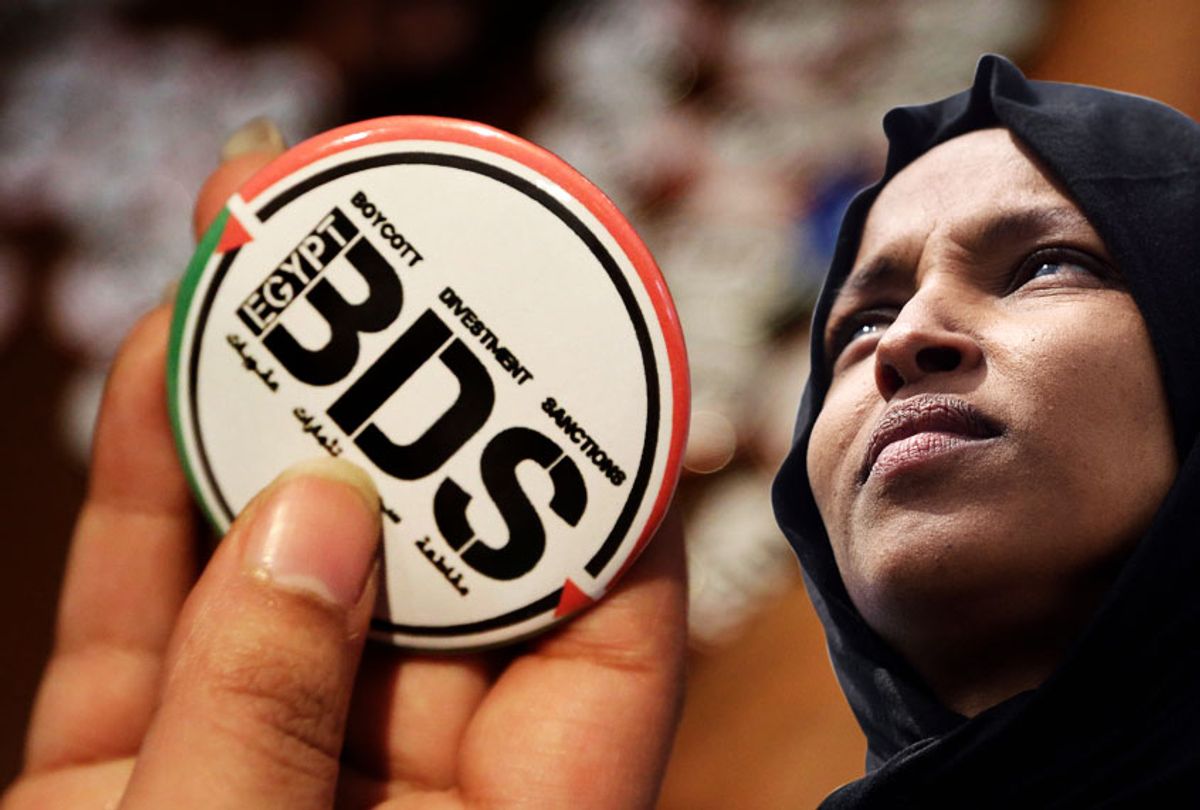 Not even Donald Trump’s most nakedly racist and universally condemned comments — at least since his equation of white supremacists with anti-racist activists in Charlottesville — have ended the internecine squabble between Democratic House moderates and the four freshman progressive congresswomen dubbed “the Squad.” After a brief moment of caucus unity to officially rebuke the president’s call for the four lawmakers of color to “go back” to where they come from, some Democrats quickly returned to the sort of anonymous sniping that set off the president’s ugly, days-long rant.

So while the president’s North Carolina rally broke out in chants of “send her back!” as Trump attacked Rep. Ilhan Omar, D-Minn., a U.S. citizen and Somali refugee, CNN’s Jake Tapper reported the anonymous complaints of several House moderates who “are growing tired of the repeated headlines involving four progressive congresswomen.” Although they didn’t go so far as to call Omar un-American on the same day the Senate voted on a bill she co-sponsored to fund the 9/11 Victims Compensation Fund, these unnamed Democratic lawmakers cited several of the same lines of attack against the Squad as those advanced by Trump and the GOP, who are desperate to make them the face of the Democratic Party. One such attack portrays the Squad as anti-Semitic for speaking out against anti-BDS legislation, which seeks to block efforts to financially protest Israel.

BDS “envisions a world without Israel,” proclaimed  Rep. Ted Deutch, D-Fla., during a debate on a House resolution condemning BDS this week. “I reject it!”

Omar responded by arguing, “We must support an end of the occupation and seek to achieve a two-state solution.” She added: “I believe firmly that the path to peace does not lie with violent means. We should condemn in the strongest terms violence that perpetuates the occupation, whether it’s Israel, Hamas or individuals. We cannot also condemn nonviolent means. We cannot simultaneously say we want peace and oppose peaceful means to hold our allies accountable.”

The debate played out in the House Foreign Relations Committee, which was noteworthy because Republicans in Congress have called on House Speaker Nancy Pelosi to strip Omar of her seat on the committee for months. The House will likely vote next week on the anti-BDS resolution, which has more than 336 co-sponsors and was coauthored by Rep. Lee Zeldin, R-N.Y., who has smeared Omar over her criticism of Israel’s policies. It is part of a package of other Israel-related measures — including a resolution backing a two-state solution, which Rep. Omar supports. She also introduced a resolution that “affirms that all Americans have the right to participate in boycotts in pursuit of civil and human rights at home and abroad, as protected by the First Amendment to the Constitution.”

While it’s clearly in response to crackdowns on BDS, Omar’s resolution makes no mention of Israel or Palestine. Co-sponsored by fellow Squad member, Rep. Rashida Tlaib, D-Mich., and civil rights icon Rep. John Lewis, D-Ga., Omar’s measure identifies historical boycotts as constitutionally protected forms of expression to advance civil and human rights. It notes that in 1982, the Supreme Court held that engaging in a “nonviolent, politically motivated boycott” is free speech protected by the First Amendment.

The bill is "in response to a widespread campaign being waged by the Israeli government and its U.S. supporters to silence Americans who choose to engage in BDS," the lawmakers acknowledged in a statement. Omar has added in interviews that the resolution “is an opportunity for us to explain why it is we support a nonviolent movement, which is the BDS movement.”

BDS is not about punishing Israel for being a Jewish state, as is often argued. Supporters say the movement to boycott Israel is meant to pressure it to abide by international law and respect the human rights of Palestinians. Ultimately, Omar and others argue, the question isn't whether or not BDS is anti-Semitic but whether laws prohibiting Americans from engaging in it are anti-American.

There are laws against BDS, which deny state jobs and resources to taxpaying citizens for their decisions on whom to do business with, in 27 states. In at least one case in Texas, a person has lost has already lost her job.

It’s important to remember that much of the GOP was against boycotting South Africa during the apartheid years as well, including former president Ronald Reagan who vetoed a sanctions bill, a veto ultimately overridden by Congress. So it should be no surprise that the National Review called Omar’s resolution “malicious trolling.” Or that Republicans in the Senate, who voted for a bill to block federal contractors from participating in BDS two months ago, jumped on Omar’s resolution to repeat their cries of anti-Semitism.

“When Ilhan Omar supports BDS, she shouldn’t be permitted to wrap herself in the American flag,” David French wrote at NRO.

But Blue Dog Democrats, the moderate or conservative members of the House majority — some of whom who have rebranded themselves as the “Problem Solvers” caucus — sound virtually indistinguishable from the GOP on the issue.

Rep. Brad Sherman, D-Calif., for instance, simultaneously characterized Omar’s bill as an assault on Israel and as not being serious legislation.

“I can’t imagine that any committee is going to mark up or take seriously any pro-BDS resolution,” Sherman told the Jerusalem Post. “Am I worried about the overall BDS movement worldwide as an economic matter? No. As an effort to delegitimize Israel, of course. The comments here today [by Omar and other supporters] are a tiny part of that delegitimizing effort.”