"Send her back" is nothing new: Racism and xenophobia are Trump's only political strategy

Trump suggested Barack Obama was a foreigner and said Syrian refugees "could be ISIS ... they're going back" 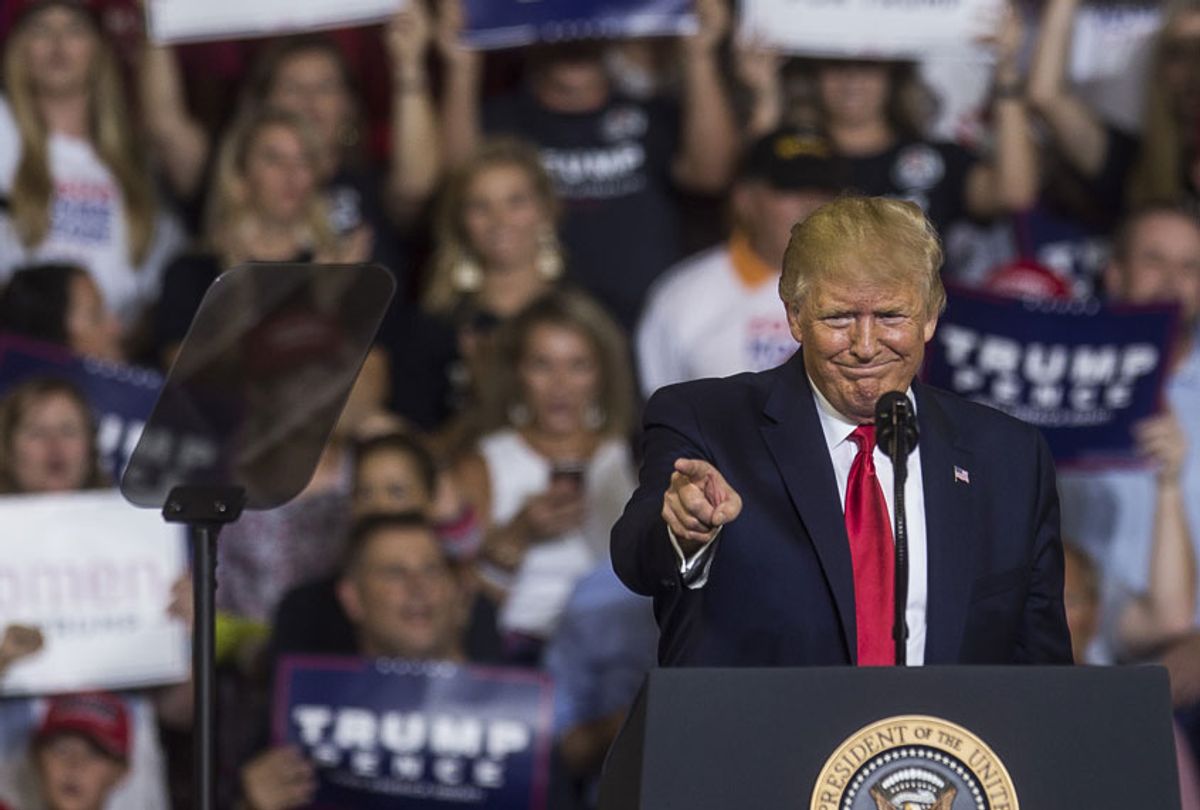 Donald Trump has bragged many times that his 2016 election victory was a result of his unique political genius, saying only recently, "You know who got me elected? I got me elected!" He is convinced that his instincts are infallible and that he speaks for the American electorate when he engages in his patented demagogic bigotry. He believes this is what brought him to the White House and is what will win him a second term.

He has little choice but to try. Even with a healthy economy and no new wars, he's been unable to raise his approval ratings above the 45 percent or so that elected him. For all of the media's insistence over the past few years that his victory was a result of "economic anxiety," Trump himself knows better. He knows he can only replicate his 2016 fluke by activating the racist id of his following to its fullest in order to once again eke out a narrow Electoral College victory.

Now that he has found the perfect symbols of all his voters' racism, xenophobia, misogyny, and Islamophobia in the persons of Reps. Ilhan Omar, Alexandria Ocasio-Cortez, Rashida Tlaib and Ayanna Pressley, there will be no turning back. They are the living personification of everything he and his voters loathe: Hispanic, Muslim, African American, progressive women.

Trump's recent Twitter tantrum and the ensuing outrage over his supporters' "Send her back" chant really should not come as any surprise. After all, he is the king of the "birthers," who managed to single-handedly convince millions of Americans that Barack Obama was a secret Muslim foreigner trying to pass himself off as an American citizen and was, therefore, an illegitimate president.  These are his political roots.

And you can forgive his followers for chanting "Send her back," since Trump repeatedly promised to send refugees and immigrants back to where they came from during the 2016 campaign. It was a staple of his campaign from the very beginning to refer to Syrian refugees as a possible "Trojan horse."

In New Hampshire for the first time since he failed to correct a man's rant about President Barack Obama being a Muslim, Trump was greeted by a few thousand cheering fans — and he was fired up. ...

On the topic of Syrian refugees, Trump was forceful: "I'm putting people on notice that are coming here from Syria as part of this mass migration, that if I win, they're going back!”

One of his favorite performances was to read the lyrics to a song called "The Snake," which he saw as a parable for immigrants and refugees turning on the Americans who generously "took them in."  He brought that back as a greatest hit at CPAC last year:

From the beginning of his campaign, he spoke of mass deportations of undocumented immigrants, citing (without naming it) the grotesque "Operation Wetback" from the 1950s as his model. In one Republican primary debate, he explained:

Let me just tell you that Dwight Eisenhower, good president, great president, people liked him. I like Ike, right? The expression. "I like Ike." Moved a million and a half illegal immigrants out of this country, moved them just beyond the border. They came back. Moved them again, beyond the border, they came back. Didn’t like it. Moved them way south. They never came back. Dwight Eisenhower. You don’t get nicer, you don’t get friendlier.

He told the press that he would create a "deportation force" that would "humanely" remove these millions of citizens.

In other words, he has formerly claimed that the first African American president of the United States was really a foreigner and he's been talking about "sending back" immigrants and refugees for years. So this latest salvo isn't original, although it's the first time he has combined claiming that a black American is an illegitimate citizen with calls for the person to "go back to where they came from." So in that respect he's taken the demagoguery up a notch. But his fans are just following the familiar grooves of his call-and-response chants by using words they've heard a hundred times before. When he said at his North Carolina rally that Ilhan Omar has "contempt for hard-working Americans," they knew exactly what to do.

Trump danced around the "Send her back" chant when asked about it on Thursday, saying he "disagreed with it" and claiming that he tried to stop it. (He didn't disagree with it and he didn't try to stop it.) This is par for the course with Trump. He throws out the red meat to his crowds and then pretends he doesn't like the fact that they gobbled it up like a school of red-bellied piranhas. But he doesn't keep up the pretense for long.

You will recall that when the eventually ubiquitous "Lock her up" chants first started he disavowed them, telling the media during a press conference:

It wasn't long before he told his people that he was going to stop being so nice and when the chants started he began puffing out his chest and strutting around the stage like Il Duce. During the presidential debates, he famously told Clinton that if he were president, “you’d be in jail.” The chants continue to this day.

I have every expectation that he will do the same with "Send her back" or any other chant his fans come up with over the course of the next year and a half. He believes that pushing this odious demagoguery is how he will win because it's how he won before. In any case, he doesn't know how to do anything else.