Donald Trump is gambling racism will win for him in 2020 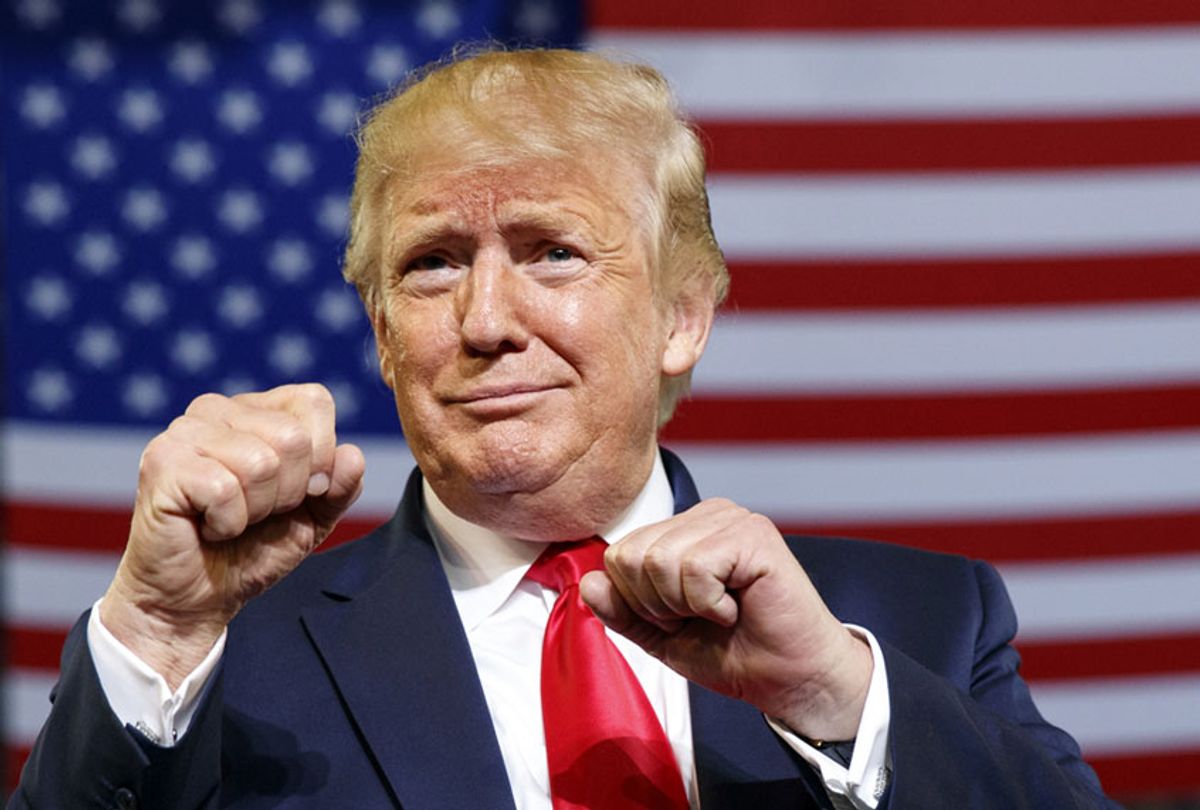 Can we retire the phrases, “double-down” and “triple-down” please? Trump made them meaningless this week as he repeatedly made racist attacks on the four female Democratic members of congress who have become known as “The Squad.” They are the four women who got themselves elected to congress and together represent 2.9 million Americans.

Just to put that in perspective, 15 states have populations smaller than the number represented by Alexandria Ocasio Cortez of New York, Ilhan Omar of Minnesota, Ayanna Pressley of Massachusetts, and Rashida Tlaib of Michigan. Trump’s racist attacks on the four members of congress implied that they are not adequately “American.” In fact, three of them are citizens born in this country, and one, Ilhan Omar, came here at the age of 10 and is a naturalized citizen. Trump’s demand that they “go back” to their countries of origin, apart from its obvious racism, belies the fact that they symbolically represent a huge swath of the American population which Trump doesn’t count among his supporters.

So Trump’s racism applies far beyond the four members of congress he has decided to target and apparently make a focus of his campaign. Taken together, he is writing off 45.9 percent of the American population and implying that because they are not sufficiently white or native-born, they are not part of the “America” he represents.

It’s hardly surprising. Did you have a look at the crowd at his rally in North Carolina on Wednesday night? Trump claimed there were 10,000 of them, but whatever the number, they were uniformly white and disproportionately elderly. He looks out at the crowds at his rallies, and he thinks he’s looking at the United States of America. He’s wrong. As apparently everyone but Trump knows, the population of this country is getting browner, blacker, younger, and more foreign, in the sense of being from recent immigrant stock. Trump’s America is dying of old age, it’s killing itself with opioids and guns, and to his apparent horror, it’s inter-marrying with people of different skin color, religion, and national origin.

The largely white fans of NASCAR aren’t going to win the election for Trump in 2020. According to ESPN, the average viewership for 33 televised races in 2018 was 3.3 million. That’s down from averages of 4.1 million in 2017, and 4.5 million in 2016. In comparison, 14.3 million watched the Women’s World Cup Final on Fox on July 7. An additional 1.6 million watched the match in Spanish on Telemundo, and another 6 million watched the match in English streaming online, “making it the most-watched soccer match on English-language television, men’s or women’s, in the U.S. since the 2015 FIFA Women’s World Cup final, which delivered 25.4 million viewers,” according to CNBC.

That was the sporting event featuring Megan Rapinoe, the U.S. star who famously remained seated during the playing of the National Anthem this year, turning her into the target of Trump’s ire for her allegedly un-American-ness. She’s gay, she’s female, and she stands up to Trump. Sounds like she hit the trifecta to me.

Trump’s bet on racism in his campaign in the 2020 election is stunning when you think about it. His tweets and follow-up comments to the press, and his whipping the crowd into a racist frenzy at the North Carolina rally on Wednesday were drenched in the slime of white supremacist hate speech. Telling the four Democratic members of Congress to “go back” to the countries “from which they came” is like quoting from the racist playbook of Bull Connor and Orval Faubus and George Wallace. All of them were proudly racist and whipped-up anti-civil rights crowds by calling on black Americans to “go back to Africa” and worse. This is the kind of shit David Duke spewed from his pinched little cake-hole when he ran for governor of Louisiana in 1991. I know, because I covered his campaign for Esquire, and went to some of his insane, racist rallies and appearances at rodeos and gun shows. And then I turned on my television on Wednesday night and saw the same thing all over again. Only this time, it’s not an ex-Klan leader like David Duke. It’s the goddamned president of the United States, and he’s spewing racist hate speech at a rally in his campaign for re-election!

This is what it’s come to, folks. The kind of racist hatred that used to be hidden away in backwaters like Mississippi and Alabama and Louisiana and practiced by the likes of David Duke is now part of our national conversation. It’s taken over our daily political life. A bunch of right-wing “intellectuals” gathered this week at the Ritz Carlton in Washington D.C. for something called the National Conservatism Conference. It was supposed to be an attempt by the smart guys on the right to drag the political term “nationalism” away from Trump and his white nationalist base. But there was their president, less than a mile away, dominating the news cycle throughout their conference with racist tweets against four women of color in the congress. It must be hell to be a right-wing intellectual these days.

But with all of the racism and hate that’s in our face every day coming from our own president, with all of the crimes against humanity he’s committing on our southern border with the way he’s treating immigrants seeking asylum in this country, and even though we know there are more of us than there are of them, where are the demonstrations? Look what happened in Hong Kong when they threatened to pass a law allowing extradition to mainland China. Millions of people took to the streets. Millions! The photos of the demonstrators filling the streets were stunning. And you know what happened? The Hong Kong government backed down. They put the extradition law on hold, and it’s expected to be quietly dropped.