In debuting the same week that powerful women of color came attack, Gina Torres' "Suits" spinoff is right on time 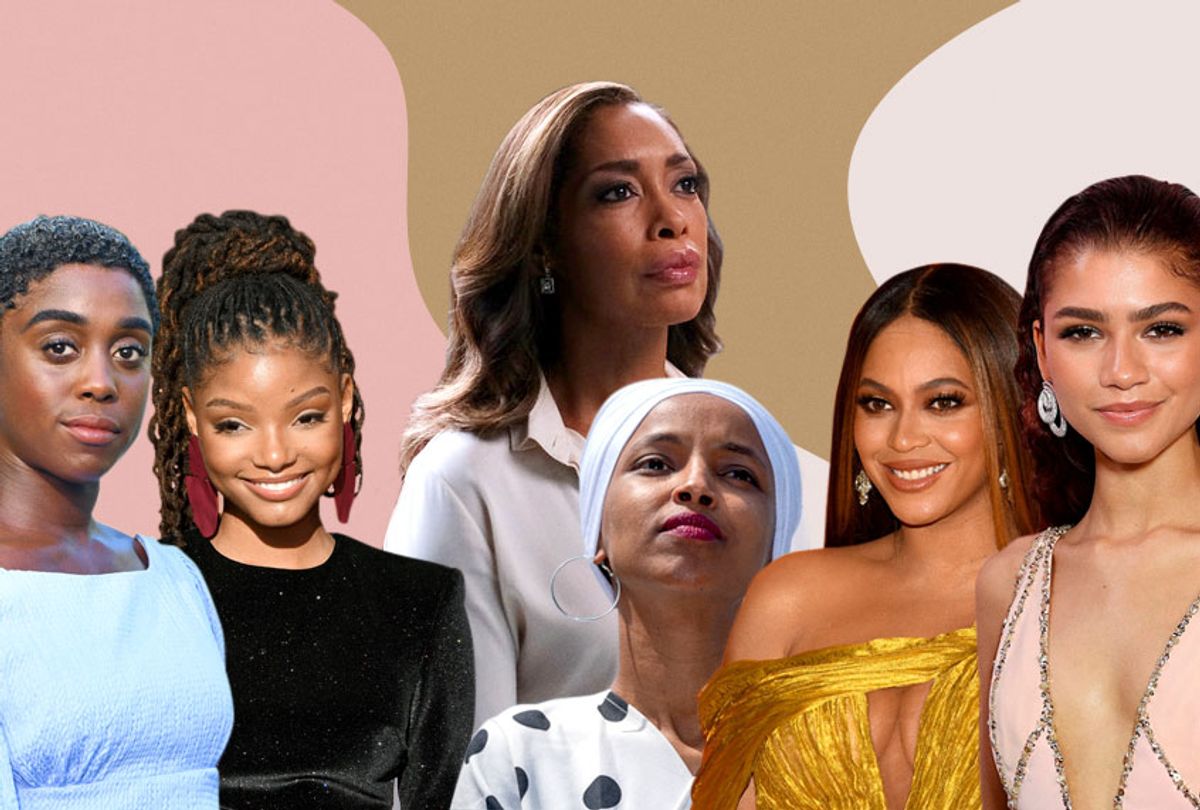 This week Donald Trump, the President of the United States, told four American citizens — all women of color, two of them black women — to "go back and help fix the totally broken and crime infested places from which they came."

This week came the news that in the 25th Bond film the new 007 is a rumored to be a black woman, played by British actress Lashana Lynch.

This week, the President whipped his followers into a frenzy at a rally in Greenville, North Carolina by smearing Rep. Ilhan Omar (D-Minn.) with nasty falsehoods, basking in their loud chants of "Send her back! Send her back!"

This week, Beyoncé debuted the video to "Spirit," her original song written for the live-action version of "The Lion King." The artist made a point of including African performers in her vibrant, gorgeously filmed and choreographed piece.  Describing the music to ABC's Robin Roberts, a fellow black woman, Beyoncé called it "a love letter to Africa."

This week at the first National Conservatism Conference held in Washington D.C., University of Pennsylvania law professor Amy Wax made a case  "that our country will be better off with more whites and fewer nonwhites," parroting the racist claim that immigrants are loud and dirty.

This week, USA premiered "Pearson," spinning off Gina Torres' popular character from "Suits," Jessica Pearson. In "Suits," Jessica is the managing partner at a top law firm in New York City. She's smart, solutions-driven, chic, a no-nonsense problem solver. She can also be as manipulative and ruthless as she required to be to win, and to survive.

In "Pearson," airing Wednesdays at 10 p.m. on USA, Jessica's story picks up after she's been disbarred in New York State and, as part of a deal to drop a lawsuit she waged on behalf of her aunt Lillian (Juanita Jennings), accepts a job as a fixer for Mayor Bobby Novak (Morgan Spector) — a move that dismays those closest to the mayor, including his press secretary Derrick Mayes (Eli Goree).

Reading this makes "Pearson" resemble another black woman who is a feared and highly effective fixer, Olivia Pope from "Scandal." Torres' USA series owes a debt to Shonda Rhimes' creation, no question.

But "Pearson," which Torres says grew out of her obsession with the 2016 election, contains many more intentional differences that acknowledge the character's identity and how the world treats her as a result. Throughout each episode "Pearson" never releases the tangible sense of frustration Jessica feels, but rarely shows, at having to prove her worth to her boss, despite her track record in New York City and her Harvard Law pedigree.

Her co-worker, city attorney Keri Allen (Bethany Joy Lenz), doesn't trust her and actively works against her; in the backdoor pilot that aired on "Suits" Keri worked to get Jessica's license to practice law in Illinois revoked.  Jessica retains her designer wardrobe and expansive bank accounts, but she finds that that wielding power doesn't come as easily in a segregated, politically territorial and economically divided city like Chicago as it did in New York, her former kingdom.

She's central to Mayor Novak's squad, but her teammates aren't ready to let her carry the ball. So whenever she can, she snatches it and runs her own plays.

And she's barely into her first week on the job when she finds out that Novak's driver Nick D'Amato (Simon Kassianides) may be connected to a homicide, and has to contend with brutish, crooked developer Pat McGann (Wayne Duvall), who's eager to exploit Novak and displace poor families — like her aunt and cousin.

To longtime viewers, Jessica is a hero. To a few morally-upright, hard-working people Jessica has to strong-arm to protect her own, she's is a villain.  And in one telling moment, after she's walked away from crushing a working-class good guy, she pauses on the sidewalk outside their meeting place and takes a moment to dry heave at what she's just done.

Being Jessica Pearson — being a woman of color working in politics — takes an emotional toll.

Nonwhite women have long been accustomed to witnessing a disconnect between how we're viewed in scripted television and movies and via the news and documentaries. For many years American TV viewers saw black women in television in the role of domestics. Then, in the midst of the Civil Rights movement, when women were being attacked in the streets and denied equal access to public spaces, "Star Trek" brought Nichelle Nichols' Uhura to prime time. The show landed in the same year Huey Newton and Bobby Seale founded the Black Panther Party, in 1966.

The summer following its initial debut was marked by race riots that immolated communities across America.  But Nichols' Uhura lives in a multiracial speculative future where anyone can realize the dream of soaring among the stars.

In a now-famous story revealed on a Reddit thread Nichols admitted that she thought of quitting "Star Trek" following the first season, but a prominent fan persuaded her to stay on the series:

Dr. Martin Luther King, quite some time after I'd first met him, approached me and said something along the lines of 'Nichelle, whether you like it or not, you have become an symbol. If you leave, they can replace you with a blonde haired white girl, and it will be like you were never there. What you've accomplished, for all of us, will only be real if you stay." That got me thinking about how it would look for fans of color around the country if they saw me leave. I saw that this was bigger than just me.

Television has traveled  many leagues since then, and between Uhura and Jessica Pearson are countless nuanced portrayals of black women and female characters of color.  Kerry Washington, Viola Davis, Angela Bassett, Taraji P. Henson, all of these women and many more stand in contrast to the negative imagery and racist connotations Trumpism seeks to association with black and brown women.

But it is fortifying to see the first episode of "Pearson" debut at the same time that news footage shows two prominent black women, Omar and Rep. Ayanna Pressley (D.-Mass), under constant attack by the right wing.

Granted, it's also meaningful that a person can watch Anna Diop play popular D.C. Comics universe character Starfire on the web series "Titans." And while women of color are being denigrated for political purposes in real life, they might turn off the TV and take solace in enjoying a black actress, Zendaya, portraying MJ in "Spider-Man: Far From Home."

Before the news spread about a black woman winning the hallowed 007 designation, Disney announced that Halle Bailey is playing Ariel in its upcoming live-action remake of "The Little Mermaid." Racist fanboys lost their minds. Disney doesn't care. And do not forget that in the outcome of "Avengers: Endgame," Thor left New Asgard in the hands of its new queen, Valkyrie, portrayed by Tessa Thompson.

Given the longstanding absence of people of color in central sci-fi and fantasy roles, all of this is worth celebrating. But these characters exist in idealized worlds far removed from our own reality.

A more down-to-Earth comparison may be found going back in time to two years after "Star Trek" introduced Uhura: 1968 marked the premiere of "Julia," a family sitcom starring Diahann Carroll as a nurse, widower and single mother.

"Julia" premiered mere months after Martin Luther King, Jr.'s assassination and Lyndon Johnson's signing of the Civil Rights Act in 1968. The series was a hit, even though at the time Carroll herself critiqued the series' writers failing to reflect an honest version of the grim economic and social realities African Americans were facing.

"For a hundred years we have been prevented from seeing accurate images of ourselves, and we're all over-concerned and overreacting," Carroll told TV Guide in December of 1968. "The needs of the white writer go to the superhuman being. At the moment, we are presenting the white Negro. And he has very little Negro-ness."

"Pearson," in contrast, never downplays Jessica's cultural identity or the wealth gap between her world and that of her working class relatives.

Even if "Pearson" doesn't emphatically highlight the racial issues beleaguering Chicago — this is still a basic cable drama, after all — it does an admirable job of inferring how Jessica's privilege and her proximity to Chicago's center of political power affects how her community and family perceive her.

Jessica lives in a chic, glamorous apartment because she can afford to, while Lillian, Jessica's cousin Angela (Chantel Riley) and her nephews live in public housing.

Angela doesn't begrudge her cousin Jessica's success, but resents her "bougie" traits and is quick to turn down offers of assistance. A Latinx woman who works in city hall, Yoli Castillo (Isabel Arraiza), takes one look at her and assumes that she's a privileged snob who thinks she's above everyone else. Jessica quickly disabuses her of that notion, chastising her in fluent Spanish for good measure.

Combining these story traits with the darker visual palette and the plot's detailed exploration of political corruptions makes its story moodier and heavy in comparison to the lightweight, brightly-lit "Suits."

For that reason, "Suits" viewers may not easily come along for the ride. But showrunner Daniel Arkin's approach is fitting. Politics is an altogether shadier business than Manhattan law, warranting a more severe tone to accompany director Kevin Bray's shadowed visuals.

Arkin also writes a tighter focus and complexity into Jessica than what was afforded to the character when she was part of an ensemble surrounding two white men in its opening seasons and, in later seasons, the one who remains.

A series cannot realistically do that without exploring what it means to be a black woman in a city blighted by racial tensions and economic disparity. And a segment of viewers may find solace in Jessica Pearson's struggle, especially in this hour of America's history. Here is a woman hired to one of the toughest, dirtiest jobs in Chicago politics, who contends with multiple obstacles in her way, who faces emotionally draining pushback and, to the shock of everyone around her, succeeds nevertheless.

Whether viewers take to "Pearson" or not, Jessica Pearson is a symbol of endurance anyone can find comfort in, but black and brown women in particular. We can use something turn to when so much of the world is loudly standing against powerful women who look like Jessica … and like us.