At Trump rally, president's supporters chant "send her back" to Rep. Ilhan Omar 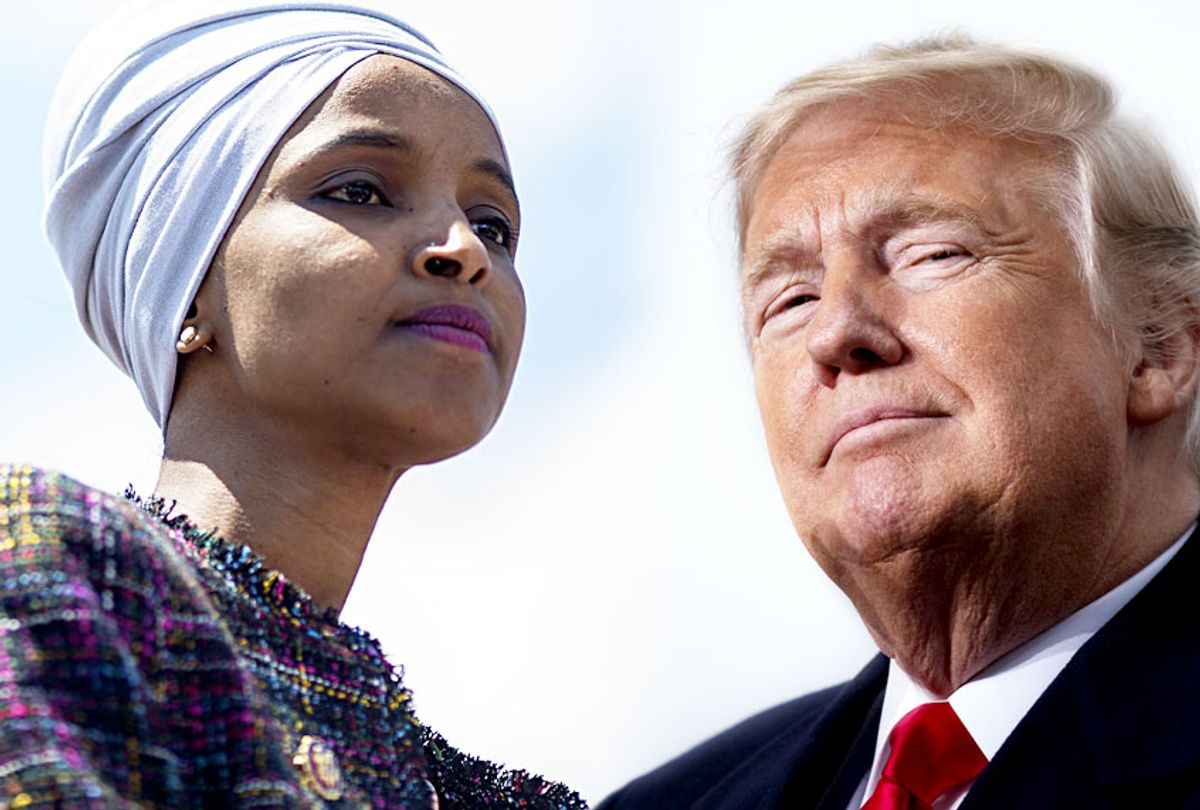 Attendees rally for President Donald Trump on Wednesday chanted "send her back" to Rep. Ilhan Omar, D-Minn., while the commander-in-chief said nothing to dissuade them.

The chant occurred during a political event in Greenville, North Carolina for Trump's 2020 reelection campaign, according to CNN. While the president castigated all of the members of "the squad" — the group of four progressive freshman congresswomen of color that includes Omar and Reps. Alexandria Ocasio-Cortez of New York, Ayanna Pressley of Massachusetts and Rashida Tlaib of Michigan — the audience specifically reacted to Omar by chanting "send her back," a reference to the fact that the congresswoman was born in Somalia but immigrated to the U.S. before she was an adult.

Omar responded to the insults by tweeting, "I am where I belong, at the people’s house and you’re just gonna have to deal!" She later quoted a poem by Maya Angelou, "You may shoot me with your words, You may cut me with your eyes, You may kill me with your hatefulness, But still, like air, I’ll rise."

Ocasio-Cortez also condemned the incident on Twitter, writing that "to all those scared for our future: we can get through this better than we started. We have the power to triumph over hatred, division, and bigotry. But decency cannot be taken for granted. It is something we must create, advance, and actively work to build each and every day."

The call for Omar to go "back" to Somalia referenced a series of tweets that Trump posted on Sunday. In an attempt to condemn the so-called "squad," Trump wrote that it was "so interesting to see 'Progressive' Democrat Congresswomen, who originally came from countries whose governments are a complete and total catastrophe, the worst, most corrupt and inept anywhere in the world (if they even have a functioning government at all), now loudly and viciously telling the people of the United States, the greatest and most powerful Nation on earth, how our government is to be run. Why don’t they go back and help fix the totally broken and crime infested places from which they came. Then come back and show us how it is done. These places need your help badly, you can’t leave fast enough. I’m sure that Nancy Pelosi would be very happy to quickly work out free travel arrangements!"

While Omar was born in another country, Ocasio-Cortez, Tlaib and Pressley were all born in the U.S. All four congresswomen are American citizens.

Trump later doubled down on his original tweets, writing that it was "so sad to see the Democrats sticking up for people who speak so badly of our Country and who, in addition, hate Israel with a true and unbridled passion. Whenever confronted, they call their adversaries, including Nancy Pelosi, 'RACIST.' Their disgusting language and the many terrible things they say about the United States must not be allowed to go unchallenged. If the Democrat Party wants to continue to condone such disgraceful behavior, then we look even more forward to seeing you at the ballot box in 2020!"

The chants of "send her back" also echoed of one of the more infamous chants from the 2016 presidential election. Trump frequently would rile up audiences at his rallies into chants of "lock her up" directed against Democratic nominee Hillary Clinton, ostensibly to draw attention to her email scandal but with many critics noting an undercurrent of misogyny in the subtext.