"Trump feels comfortable leading the GOP into outright racism, and that should concern all Americans," AOC adds 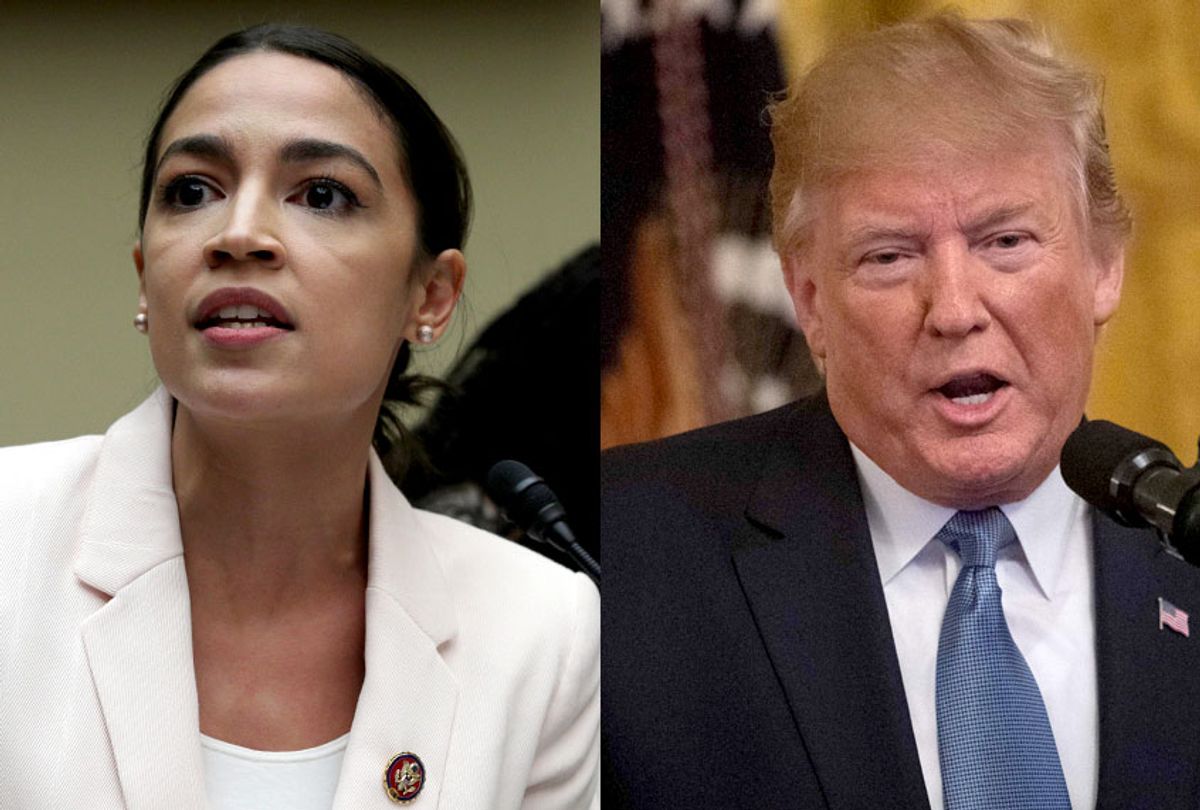 President Donald Trump has doubled down on racist tweets sent over the weekend, in which he said four liberal Democratic congresswomen should "go back and help fix the totally broken and crime infested places from which they came."

Although he did not specify to whom he was referring, the president appeared to be referencing the group of four freshmen women of color known as "the squad," which includes Reps. Alexandria Ocasio-Cortez of New York, Ilhan Omar of Minnesota, Ayanna Pressley of Massachusetts and Rashida Tlaib of Michigan.

"So sad to see the Democrats sticking up for people who speak so badly of our Country and who, in addition, hate Israel with a true and unbridled passion. Whenever confronted, they call their adversaries, including Nancy Pelosi, 'RACIST.' Their disgusting language and the many terrible things they say about the United States must not be allowed to go unchallenged. If the Democrat Party wants to continue to condone such disgraceful behavior, then we look even more forward to seeing you at the ballot box in 2020!" Trump wrote in a pair of tweets on Sunday evening.

Last week, in an interview with the New York Times, Pelosi appeared to call into question the political clout of “the squad” after its members were the only four House Democrats who voted against a border security bill.

Days later, Ocasio-Cortez told the Washington Post that "the persistent singling out . . . it got to a point where it was just outright disrespectful . . . the explicit singling out of newly-elected women of color."

The president continued to double down in another pair of tweets sent Monday morning.

"When will the Radical Left Congresswomen apologize to our Country, the people of Israel and even to the Office of the President, for the foul language they have used, and the terrible things they have said. So many people are angry at them & their horrible & disgusting actions!" Trump wrote.

He added, "If Democrats want to unite around the foul language & racist hatred spewed from the mouths and actions of these very unpopular & unrepresentative Congresswomen, it will be interesting to see how it plays out. I can tell you that they have made Israel feel abandoned by the U.S."

The president's remarks came after he received criticism for Sunday morning tweets, which told four congresswomen to "go back" to their countries of origin.

"So interesting to see 'Progressive' Democrat Congresswomen, who originally came from countries whose governments are a complete and total catastrophe, the worst, most corrupt and inept anywhere in the world (if they even have a functioning government at all), now loudly and viciously telling the people of the United States, the greatest and most powerful Nation on earth, how our government is to be run," Trump wrote in a series of three tweets on Sunday. "Why don’t they go back and help fix the totally broken and crime infested places from which they came. Then come back and show us how it is done. These places need your help badly, you can’t leave fast enough. I’m sure that Nancy Pelosi would be very happy to quickly work out free travel arrangements!"

In a series of responses on Sunday evening, Ocasio-Cortez wrote that Trump is "angry because you don’t believe in an America where I represent New York 14, where the good people of Minnesota elected @IlhanMN, where @RashidaTlaib fights for Michigan families, where @AyannaPressley champions little girls in Boston."

She continued, "You are angry because you can’t conceive of an America that includes us. You rely on a frightened America for your plunder. You won’t accept a nation that sees healthcare as a right or education as a #1 priority, especially where we’re the ones fighting for it. Yet here we are. But you know what’s the rub of it all, Mr. President? On top of not accepting an America that elected us, you cannot accept that we don’t fear you, either. You can’t accept that we will call your bluff & offer a positive vision for this country. And that’s what makes you seethe."

On Monday morning, Ocasio-Cortez also posted on Twitter, "It’s important to note that the President’s words yday, telling four American Congresswomen of color 'go back to your own country,' is hallmark language of white supremacists. Trump feels comfortable leading the GOP into outright racism, and that should concern all Americans."

She added, "Until Republican officials denounce yesterday’s explicitly racist statements (which should be easy!), we sadly have no choice but to assume they condone it. It is extremely disturbing that the *entire* GOP caucus is silent. Is this their agenda?"