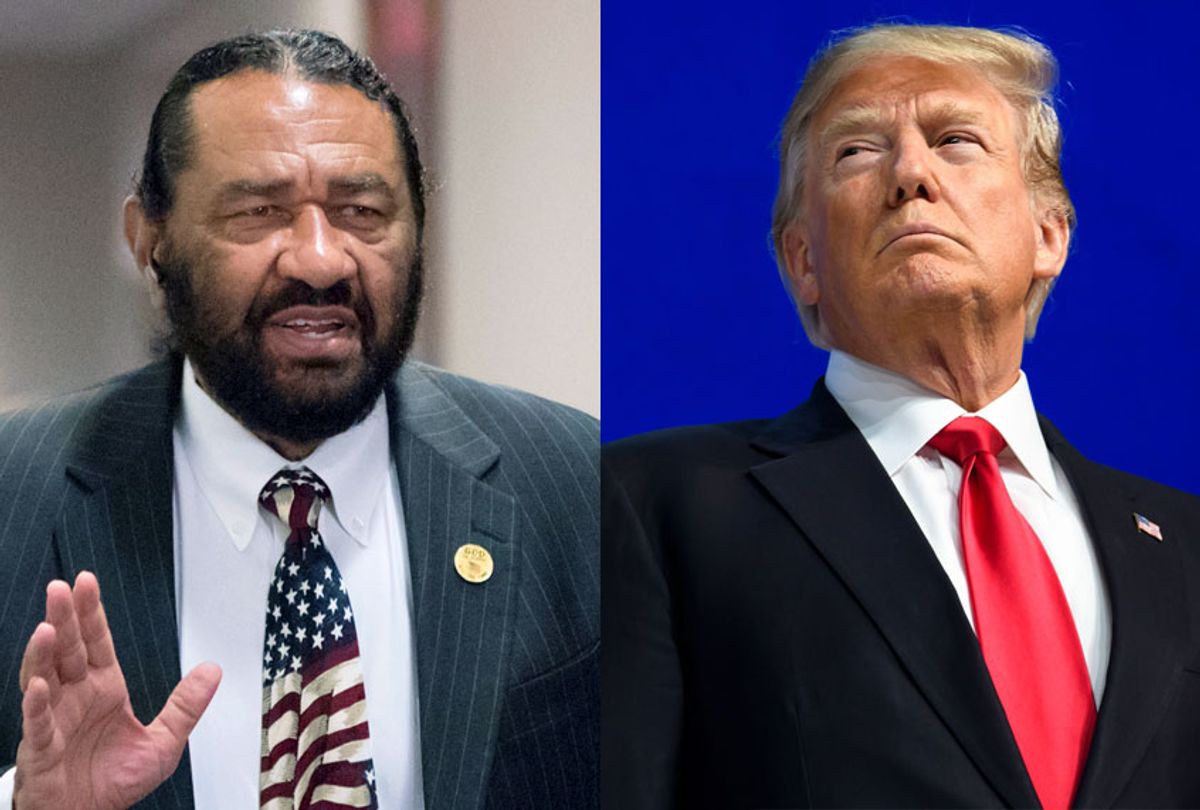 Rep. Alex Green, D-Texas, introduced articles of impeachment against President Donald Trump on Tuesday evening, putting House Speaker Nancy Pelosi and other House Democratic leaders in the position of either pushing ahead to remove the president or stifling the measure and thereby risking criticism from the party's liberal base.

Green's measure, which is expected to receive a vote on Wednesday, could be either sent to a committee, approved on the spot or tabled (thereby killing it), according to NBC News. In addition to considering Green's impeachment resolution, the House of Representatives will also vote on whether to hold Attorney General William Barr and Secretary of Commerce Wilbur Ross in criminal contempt of Congress for withholding information about the Trump administration's attempt to add a citizenship question to the 2020 census.

During a speech on Tuesday, Green mentioned how House Democrats had

Earlier he argued that Trump "is unfit to be president, unfit to represent the American values of decency and morality, respectability and civility, honesty and propriety, reputability and integrity; Is unfit to defend the ideals that have made America great; unfit to defend liberty and justice for all as extolled in the Pledge of Allegiance; is unfit to defend the American ideal of all persons being created equal, as exalted in the Declaration of Independence; is unfit to ensure domestic tranquility, promote the general welfare and to ensure the blessings of ourselves and our posterity, as lauded in the preamble of the United States Constitution; is unfit to protect the government of the people, by the people, for the people as elucidated in the Gettysburg Address; and is impeached for high misdemeanors that the following article of impeachment be exhibited to the Senate."

It is unclear whether Green's impeachment effort will be able to succeed, if for no other reason than Trump's most recent tweets — while certainly racist — were not illegal and, indeed, were protected by the First Amendment. He later told reporters that "bigotry" is a "high crime and misdemeanor," which is untrue, and also argued that President Andrew Johnson had been impeached for bigotry, which is likewise false (Johnson was impeached for breaking the Tenure of Office Act).

When asked if she supports Green's resolution, Roll Call reports that Pelosi told journalists "No, I don’t. Does that come as a surprise?"

Although Pelosi's opposition to impeaching Trump over his racist tweets is not likely to stir up controversy, her larger unwillingness to move on impeaching the president has been met with consternation by many Democratic progressives. In May Rep. Alexandria Ocasio-Cortez of New York — one of the four Democratic congresswomen targeted by Trump's racist tweet tirade — told a reporter that "I trust the speaker is taking a measured approach to ensure that we're moving everyone forward. I know that, you know, being a speaker is hard. Holding this party together is a difficult task, but I think that we know what we need to do. I personally believe that we have to move forward."

Similarly, American University Allan Lichtman, best known for his book "The 13 Keys to the White House," told Salon in May that "Nancy Pelosi seems to think that history would celebrate not Catherine the Great, but Catherine the Faint-hearted. She is leading the Democrats down the primrose path of playing not to lose, of being timid, of being afraid, the path that has always caused the Democrats to lose. This is a truly turning-point historic moment in the history of the United States."

In a series of three tweets on Sunday, Trump wrote that it was "so interesting to see 'Progressive' Democrat Congresswomen, who originally came from countries whose governments are a complete and total catastrophe, the worst, most corrupt and inept anywhere in the world (if they even have a functioning government at all), now loudly and viciously telling the people of the United States, the greatest and most powerful Nation on earth, how our government is to be run. Why don’t they go back and help fix the totally broken and crime infested places from which they came. Then come back and show us how it is done. These places need your help badly, you can’t leave fast enough. I’m sure that Nancy Pelosi would be very happy to quickly work out free travel arrangements!"