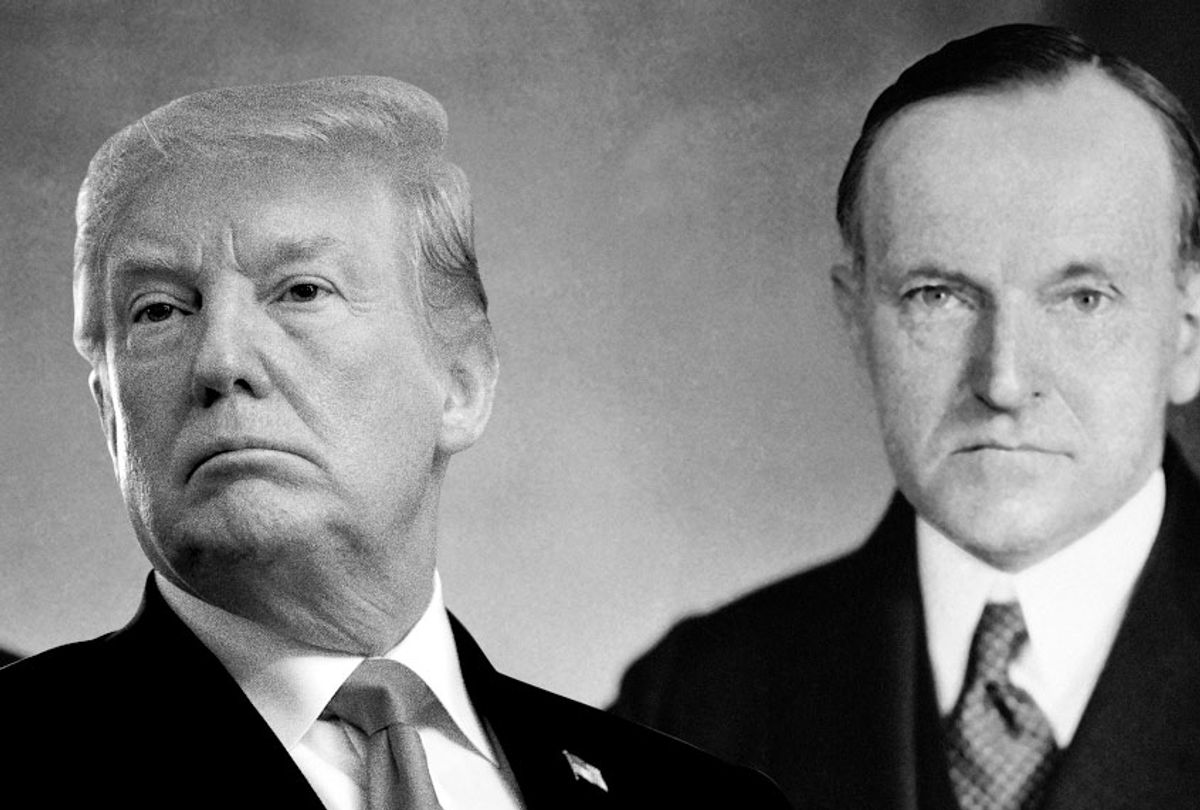 It is amazing how similar America in 2019 is to America in the 1920’s, a decade that began almost a hundred years ago. It is as if America is reliving its own history, trapped in a prison of deja vu, purposely not wanting to remember the disaster that unfolded as the 1920s ended.

The parallels are striking, the anti-immigration frenzy, race-baiting, trade wars, over-heated stock markets, corruption, and technological changes that produced hip urban centers contrasting with rural alienation and bitterness. Like today, the 1920s was a period of spectacular wealth and an ever-increasing income gap.

It is even hard to delineate which of these issues is more analogous to Trumpian America. But let’s look at the two most overtly political areas, the most Twitter-friendly ones if twitter had existed then - immigration and high tariffs. Both fermented in the isolationist a mind-set of the 1920s

In the 1920s the country was awash in anti-immigrant rhetoric. Like today it was partly based on the fear of loss of power by the white majority, as well as a fear of change at a time when technology was rapidly changing the nation. When translated into political terms, these fears became explicitly racial.

In 1921, Good Housekeeping ran an article by then-Vice President Coolidge entitled, “Whose Country Is This?” It was an essay that could be the basis of any number of Donald Trump’s tweets today. Coolidge stated in the article:

“There can’t be too many inhabitants of the right kind, the vicious, the weak of body, the shiftless, or the improvident,” the “suicidal…inflowing of cheap manhood, constitutes a danger in our midst. Some immigrants, politically twisted agitators, came with a set desire to teach destruction of government. Others may not have been intent on treachery, but there were still racial considerations too grave to be brushed aside.”

And in support of halting immigration from Southern and Eastern Europe (1921’s version of today’s Latin immigrants), Coolidge went on:

“While Nordics propagate themselves successfully, race mixing shows deterioration on both sides.”

The anti-immigration fever led to the passage of the Immigration Act of 1924, also known as the National Origins Act or Johnson-Reed Act.  According to the U.S. Department of State Office of the Historian, the fundamental purpose of the law was “to preserve the ideal of American homogeneity.”

This law hung national immigration quotas into the United States on a population baseline from the 1890 census, 34 years earlier, thus drastically limiting Asian and European immigrants perceived as radical and ‘un-American.’ These limited the number of new immigrants who were Italians, Poles, Eastern Europeans and Jews.

Higher tariffs to reduce imports are often the trade-related, economic side of isolationism and fear of ‘the other.’ In the 1920s, higher tariffs became the economic-political rallying cry to protect American industry from the so-called ‘horrors’ of the outside world. In particular, tariffs were thought to protect the American farmers who were then suffering from rapidly falling prices. Of course, the farmers’ problems had nothing to do with imports, they were mainly caused by rapid technological changes. With the advent of the automobile, millions of acres of farmland that had previously been used to grow food for horses was switched over to grow food for human consumption, which of course then created a huge oversupply.

Compounding the technological changes was the fact that during World War I, American farmers economically boomed, as they needed to supply not only the United States but also war-torn Europe.  Not seeing this as just a short-term turn of luck, American farmers borrowed heavily to expand their output. By 1922, with the war over for four years, Europe no longer needed huge quantities of American agricultural products, and prices for agricultural commodities in the United States collapsed.

Similar to today, in order to quell the political reaction from these changes, instead of examining the cause and effect, Warren Harding’s White House and Congress instituted a one-two punch of historic increases in tariffs. The first punch was the little-remembered but severely economically damaging Fordney-McCumber Act of 1922, a dress rehearsal for the more infamous Smoot -Hawley Act that was enacted eight years later. The Fordney-McCumber Act introduced the highest tariffs in American history up to that time. The Fordney-McCumber Act of 1922 was a purely political salve that in its application ended up making life on the farm more difficult. “Shockingly,” America’s trading partners immediately responded to Fordney - McCumber by raising their own tariffs.  Spain raised its tariffs on American goods by 40%, and Germany and Italy significantly raised theirs on American wheat. In 1922 substantially more American agricultural products were sold to Europe than the Europeans were selling to America.  Consequently, the protectionist medication prescribed by the Harding administration made the situation far worse than it had been.

The Fordney-McCumber Act also hurt the American economy as a whole in another way. It severely increased inflation. Domestic manufacturers — basically free from foreign competition raised their prices substantially.

Of course, we all know too well how the 1920s ended both in the United States and in Europe.