Defense: Florida man who mailed pipe bombs to Obama, Clinton, Biden and others was deranged by Trump's rhetoric 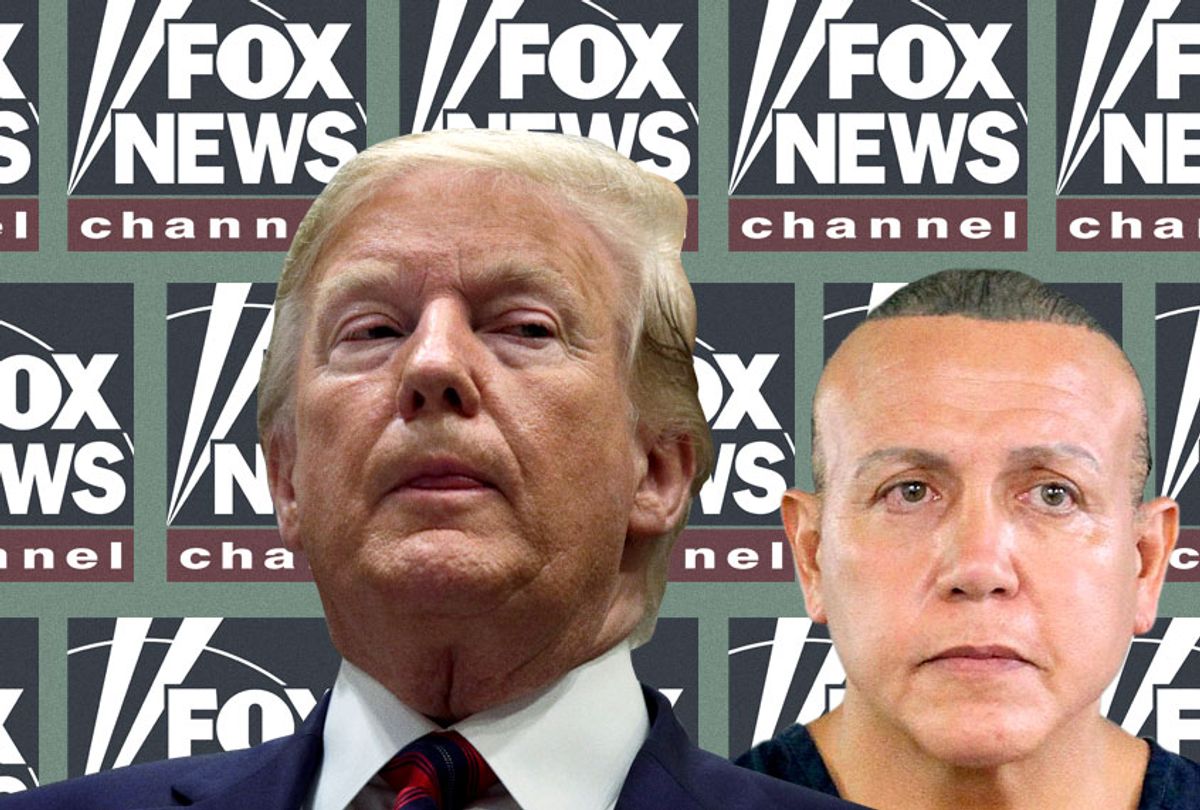 Cesar Sayoc, the domestic terrorist who pleaded guilty to 65 felonies after mailing improvised explosive devices to dozens of top Democrats, was radicalized by President Donald Trump and Fox News, his lawyer told the court in a sentencing memo.

Sayoc pleaded guilty to the terror plot in March after he mailed apparent pipe bombs to prominent Democrats, media figures and celebrities, including former President Barack Obama, former Vice President Joe Biden, and former Secretary of State Hillary Clinton, as well as CNN and other news organizations. The FBI later concluded the bombs were not operational.

Sayoc faces life in prison for the attempted bombings, but his defense attorneys have asked for him to receive a lenient sentence of 10 years, arguing that his “cognitive limitations and mental illness” made him susceptible to inflammatory rhetoric espoused by the president and Fox News hosts.

Sayoc was a Trump “super fan” who “began to consider Democrats as not just dangerous in theory, but imminently and seriously dangerous to his personal safety,” the sentencing memo said. “President Trump did nothing to dissuade this message.”

The lawyers wrote that Sayoc was a fan of Trump before his campaign, seeing him as “everything he wanted to be: self-made, successful, and a ‘playboy.’” Sayoc listened to Trump’s real estate courses, watched his television show, bought his branded products and even attended a Trump-sponsored career coaching event in Florida.

After Trump kicked off his campaign, the lawyers said, Sayoc “began watching Fox News religiously at the gym, planning his morning workout to coincide with Fox and Friends and his evenings to dovetail with Hannity.” The defense memo continued in this vein, arguing that Sayoc "was not discerning of the pro-Trump information he received, and by the time of his arrest, he was ‘connected’ to hundreds of right-wing Facebook groups."

Many of these groups promoted various conspiracy theories and, more generally, the idea that Trump’s critics were dangerous, unpatriotic, and evil. They deployed provocative language to depict Democrats as murderous, terroristic, and violent. ... Fox News furthered these arguments. For example, just days before Mr. Sayoc mailed his packages, Sean Hannity said on his program that a large "number of Democratic leaders [were] encouraging mob violence against their political opponents.”

The attorneys further claimed that Sayoc’s steroid use fueled his paranoia and delusions about the fake news stories he saw on social media.

Because of his cognitive limitations and mental illness, he believed outlandish reports in the news and on social media, which increasingly made him unhinged. He became obsessed with "attacks" from those he perceived as Trump’s enemies. He believed stories shared on Facebook that Trump supporters were being beaten in the streets. He came to believe that he was being personally targeted for supporting Trump: Mr. Sayoc thought that anti-Trump forces were trying to hurt him and they were to blame when his van was vandalized.

“A rational observer may have brushed off Trump’s tweets as hyperbole, but Mr. Sayoc took them to heart,” the attorneys wrote.

The sentencing memo echoed what Sayoc’s mother, Madeline Sayoc, said in a statement last year as she pleaded for Trump to tone down his rhetoric.

“Our political leaders, like our President Donald Trump, need to recognize that there are many sick people in this country who take their rhetoric and words of ‘War with the Media’ and ‘War with the Democrats’ to heart,” she said.

Federal prosecutors, in their own sentencing memo, recommended that Sayoc be jailed for life.

The attorneys for Patrick Stein, one of three militiamen convicted of a terror plot to kill Muslim refugees in Kansas, argued for a lenient sentence by alleging that Stein was radicalized by the president’s rhetoric.

“Trump’s brand of rough-and-tumble verbal pummeling heightened the rhetorical stakes for people of all political persuasions,” they wrote. “A personal normally at a 3 on a scale of political talk might have found themselves at a 7 during the election. A person, like Patrick, who would often be at a 7 during a normal day, might ‘go to 11’… That climate should be taken into account when evaluating the rhetoric that formed the basis of the government’s case.”