"Queer Eye" for the purity culture survivor: On the Fab Five's healthy approach to being selfish 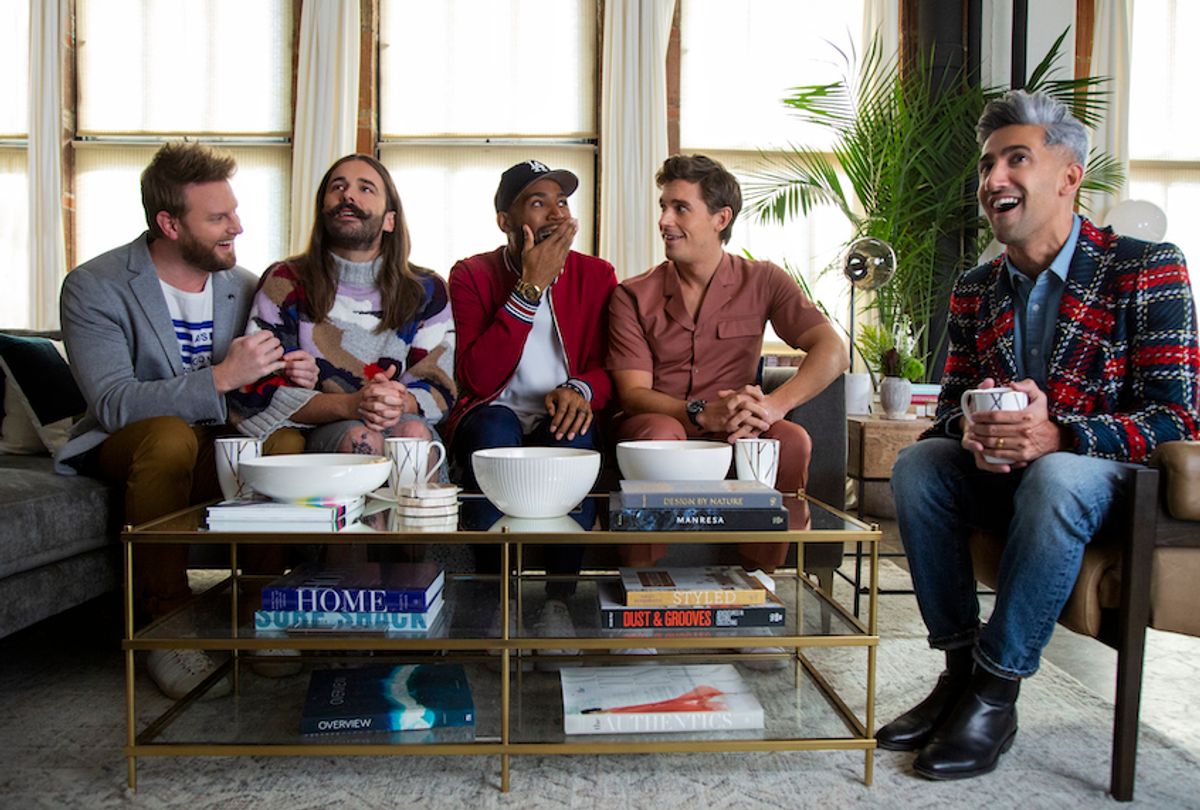 I can tell you, with some level of certainty, that from the moment I was born, my pastor assumed I would become a mother. I grew up in a Christian denomination that preached a “go forth and multiply” gospel, bolstered by baby parades and quiverfull dreams. (Psalm 127: “As arrows are in the hand of a mighty man; so are children of the youth. Happy is the man that hath his quiver full of them.”)

There was an emphasis on courting with the intention of marriage, as opposed to casual dating, repopularized in certain religious circles by the books “I Kissed Dating Goodbye” and “Boy Meets Girl: Say Hello to Courtship” by Christian author Joshua Harris — who, as fate would have it, just announced publicly last week that he and his wife were divorcing.

By the time we were 17, I had friends who were engaged following highly-supervised youth group courtships, where they were only allowed to touch while holding hands to pray; by 18, they would call their mothers in tears, disillusioned by newlywed life.

At my church, parents of married children laughingly referred to the first year of marriage as God’s way to sandpaper out the couple’s selfish imperfections.

“Selfish” was the worst adjective that could be applied to a woman’s marriage or motherhood.

In her 1985 book promoting quiverfull ideology as a theological position, author Mary Pride wrote, “The church's sin which has caused us to become unsavory salt incapable of uplifting the society around us is selfishness, lack of love, refusing to consider children an unmitigated blessing. In a word, family planning.”

By the time I hit 20, many of the girls I’d grown up with were married women, pregnant and glowing with their second child, while I felt convicted, stingingly so, for my selfishness.

I didn’t want children then. Part of this was pure practicality — I was in college, eyeing internships and graduate school. But another part of me felt like I had just stepped into adulthood and I feared that in becoming a mother so soon, I would lose myself before I even found out who I was.

No one I had known through the church had ever expressed this sentiment, so I tucked it away. While I slowly untangled my self-image from years of religious legalism and established my own convictions, my Facebook feed continued to feature increasingly elaborate pregnancy announcements and gender reveals.

Now, years later, I’m not even sure I want children. The prospect still causes my brain to light up with an immediate checklist of fears. There are some legitimate worries; I have three younger siblings and, while they were growing up, open bodies of water, electrical sockets and plastic bags terrified me. And then there is that selfish fear — that I and my life would be inherently, perhaps irreparably, changed by the experience of motherhood.

A fear that was given voice for the first time in my life in the most unexpected place: the Netflix reboot of “Queer Eye.”

Relaunched in 2018, “Queer Eye” has many of the same elements as its early-2000s predecessor. There’s the Fab Five — Jonathan Van Ness, Karamo Brown, Bobby Berk, Tan France and Antoni Porowski — who help participants, called “heroes,” revamp their entire lives, from fashion to food. These aren’t makeovers, but “make-betters,” with the overarching message that loving yourself and treating yourself with care and kindness leads to a better life all around.

Midway through the first season, the Fab Five pulls up to a home located in a small town outside of Atlanta. It’s covered in crosses and an avalanche of kid’s toys. (“You could start a vintage sippy cup store,” Antoni says when he surveys the kitchen.) That’s when they meet Bobby, a 48-year-old father and devout Christian. He and his wife, Vera, have been married for 12 years and they have six children.

“We had a short dating life and a quick marriage,” Bobby explains.

He now works two jobs — netting two hours of sleep between 4 and 6 a.m. — to support his family. His wardrobe consists of oddly-sized polos and he’s lucky to grab a shower. He looks homeless, his wife Vera says, before the cameras pan to their cluttered bedroom.

“We have the smallest room in the house,” Vera explains. “Because the kids share rooms, so they have the bigger rooms.”

“But they never sleep with you guys?” Tan asks. Vera shrugs and smiles like she’s been caught. The viewers know the kids totally take over their bed. They all share one bathroom, the living room is a wreck, Bobby acknowledges that his marriage to Vera got off to a rocky start. “Right girl, wrong foot,” he says.

Since becoming a parent, Bobby’s life had fundamentally changed; you just know that he dressed, ate, acted, groomed and decorated his home differently before he had six children. It was like every fear I’d ever had about parenthood had been condensed into a six-minute television intro, and I was peering into the quiverfull Christians living rooms of my now-grown church friends. In that way, it was both fantasy and familiar, and I was hooked immediately. How would the Fab Five “make better” a situation like this? By prescribing a healthy dose of selfishness.

Over the course of their time with Bobby, the Five take him shopping for clothing that actually fits, teach him recipes for a crowd, give the kids a designated playroom, and set Bobby up with a short morning routine to care for his hair and skin.

“Bobby, he’s supes overworked, so it’s just about creating a time in your day and say you’re worth investing a few minutes in,” Jonathan said to the camera. Some of the “Queer Eye” guys’ advice like this can come across as platitudes on first listen. But if you were never given permission to actually take time for yourself, it’s mildly revolutionary.

Bobby wasn’t the last parent that the Fab Five helped. There was Leo, the sloppy bartender from season 2 who wanted to be more present for his children; Joey, a divorced camp counselor who wanted to build a space for his visiting son that actually felt like home; Rob, a widower and father of two young sons who wanted to click the “play” button back on life after the death of his wife; Tony, a father-to-be who suffered crippling anxiety at the thought of becoming a dad.

In the most recent season, which began streaming on Netflix on Friday, there’s an episode that centers on John, a 38-year-old single father; during filming, he opens up to Karamo about how he has been silently struggling with depression.

What is so infectiously inspiring about “Queer Eye” is that, by the end of the episode, each of these parents seem genuinely happier, like they are living their own truth. We leave them with a certain level of control over how they present themselves and what the space around them looks like; there are certain boundaries in place and they seem primed to assert themselves in their personal lives. I know this is, in large part, television magic. But after nearly two decades of pastors preaching about a certain kind of parenthood, I’m happy to hear a little selfishness from any pulpit.