"Once Upon a Time ... in Hollywood" shows off Quentin Tarantino's best and worst moves

Dynamic acting and trademark wit anchor Tarantino's homage to the '60. It's also glib and self-indulgent at times 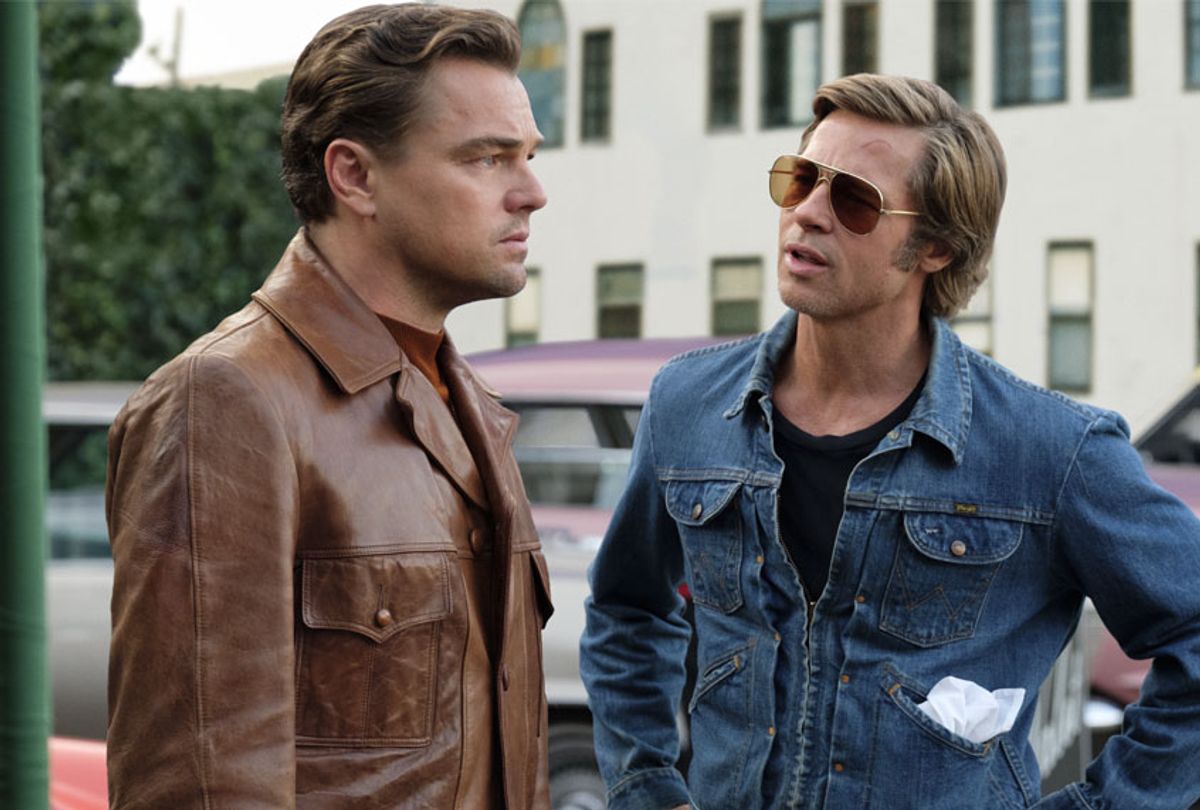 "Once Upon a Time in Hollywood" (Sony Pictures)
--

Quentin Tarantino is a pastiche artist. His films all imitate other, sometimes better, movies. His latest effort, “Once Upon a Time…in Hollywood” shows just how good Tarantino is at his craft. For more than 160 minutes, he recreates everything on screen from a fictional 1950s cowboy TV series — “Bounty Law” starring Rick Dalton (Leonardo DiCaprio) as Jake Cahill — to an episode of “The F.B.I.,” where Dalton guest stars as a criminal. Tarantino uses this show business setting as an excuse to create TV series and shoot mini films-within-his-film. He has a scene from a fictionalized war movie where Rick Dalton cracks wise and decimates a group of Nazis with a flamethrower. He screens a black and white TV series in a square frame ratio to recreate the format. He includes a musical number from a 1960s TV variety show, and he even presents Rick Dalton’s screen test for “The Great Escape” (a part he might have had if Steve McQueen turned it down).

Tarantino has such a fondness for these products of Hollywood that it is impossible not to admire his achievement in (re)creating them. The film is brimming with clever, authentic-sounding radio advertisements for perfumes, colognes and tanning products. Movie posters and theater marquees appear in more than half the scenes. (A quartet of Spaghetti Westerns that Dalton starred in later in his career are particularly impressive). TV sets are always on, playing commercials or programs like “Mannix.” There is even an arguably too-clever-by-half bit of business involving a Wolf’s Tooth brand dog food label that reads “rat flavor.”

Every scene in this film is full-to-bursting with references, homages, and in jokes. One of the best has Sharon Tate (Margot Robbie) entering a bookstore, admiring a Maltese Falcon statue, and asking for a first edition of a particular Thomas Hardy novel as a gift for her husband.

Tarantino is having great, enthusiastic fun here, and he wants viewers to enjoy his efforts as well. But “Once Upon a Time … in Hollywood” is Tarantino showing off what he can do, and his film practically grabs audiences by the lapels, insisting that they have a good time. Viewers not put off by all the “look at me” moments probably will. There is an easygoing nature to the way the story unfolds over the course of its first two hours before it gets to the fateful night in August 1969.

“Once Upon a Time … in Hollywood” opens in February of 1969, showing how Rick Dalton is struggling to maintain a career — and his sanity. He is a neurotic has-been and relies on his steady best friend, driver, gofer, and stunt double, Cliff Booth (Brad Pitt), to keep him in check. Cliff is handy with a pair of sunglasses to hide Rick crying after a meeting with Marvin Schwarzs (Al Pacino playing a Swifty Lazar-like agent). Their camaraderie is effortless, in part because Pitt exudes a laconic confidence as Cliff. But he drives like a stunt man, careening through the Los Angeles streets with force and verve. That said, whatever he does — feeding his dog, or jumping onto Rick’s roof to fix a broken aerial, shirtless — Pitt/Cliff is poetry in motion.

The film’s third central character is, of course, Sharon Tate, Rick’s neighbor on Cielo Drive. Sharon dances through most of her early scenes (one is set at the Playboy Mansion) and Tarantino fetishizes her at every opportunity. He seems to be milking the real-life tragedy that befell Tate, a victim of the Manson Family murders, although how things play out in the film may differ from actual events. (The film’s title suggests a fairy tale; recall, Tarantino has played with facts before.)

“Once Upon a Time…in Hollywood” is loosely plotted, a series of connected scenes that feature revelatory moments in the lives of the three protagonists. Rick has a transformative encounter with his wise-beyond-her-years 8-year-old co-star (Julia Butters) on an episode of the series “Lancer.” Cliff gives a hitchhiking teenage hippie named Pussycat (Margaret Qualley) a ride to the Spahn Movie Ranch, the Manson family compound. And Sharon talks her way into a theater screening her film, “The Wrecking Crew,” where she delights in the audience responding to her performance. These moments expose the true — and sometimes fragile — nature of the characters. They also create some of the only real emotions.

Too much of the film involves set pieces that are designed for showboating. That is not always a bad thing; Tarantino includes a hilarious fight between Cliff and Bruce Lee (Mike Moh), and a terrific aftermath featuring a pissed off Zoë Bell. But when Tarantino tries to ratchet up the tension in a sequence at the Spahn Movie Ranch, “Once Upon a Time…in Hollywood” gets sluggish and indulgent. Tarantino is being manipulative here, and it is both obvious and distracting. He is far better when he toys with viewers subtly, as when Rick is doing a “Lancer” scene with co-star James Stacy (Timothy Olyphant) and he misses lines, breaking a spellbinding mood.

Another irksome quality of the film is Tarantino’s penchant for pointing things out by voice over when it suits him, or using an arrow to indicate Cliff is driving the car in an action scene. These jokey, referential moments are Tarantino simply trying too hard. Snippets of Cliff and his wife on a boat are meant to add backstory, or shading to the characters, but they feel glib instead. Better are the atmospheric moments, such as a nice sequence of famous Los Angeles landmarks turning on their lights as the sun goes down on the infamous August night in 1969.

And about that night: “Once Upon a Time…in Hollywood” culminates with an extremely violent episode on Cielo Drive that is arguably more graphic and over-the-top than it needs to be. But Tarantino enjoys making viewers squirm with extreme mayhem and his dedicated fan base will appreciate what he does. That he tries to justify the act of violence by ascribing some meaning to it — a character talks about growing up and being influenced watching murder on TV — is more questionable than provocative. Especially given how sadistic the film becomes, this denouement may leave a bad taste in one’s mouth.

Regardless of the film’s flaws, Tarantino does know how to get great performances from his actors. Pitt is as cool and as charismatic as ever here. DiCaprio has fun with his role, whether having a meltdown in his trailer or doing a cigarette ad in an amusing end-credit sequence. Robbie is underused, sadly, but she is irresistible whenever she is on screen.

In support, it is bittersweet to see the late Luke Perry as a character in a “Lancer” episode. As Pussycat, Margaret Qualley is captivating, though Tarantino’s filming of her leaning through Cliff’s car window is uncomfortably prurient. Also noteworthy is Nicholas Hammond, who delivers a scene-stealing turn as Sam Wanamaker, the “Lancer” director who has some terrific exchanges with Rick.

“Once Upon a Time…in Hollywood” does boast a fantastic soundtrack, as one expects from Tarantino. The music, like the images and recreations, shows how lovingly and carefully he constructs his films. If only this one generated a greater emotional payoff for all of the concentrated effort.