Netflix cancels "Tuca & Bertie," loses out on one of the most timely TV narratives 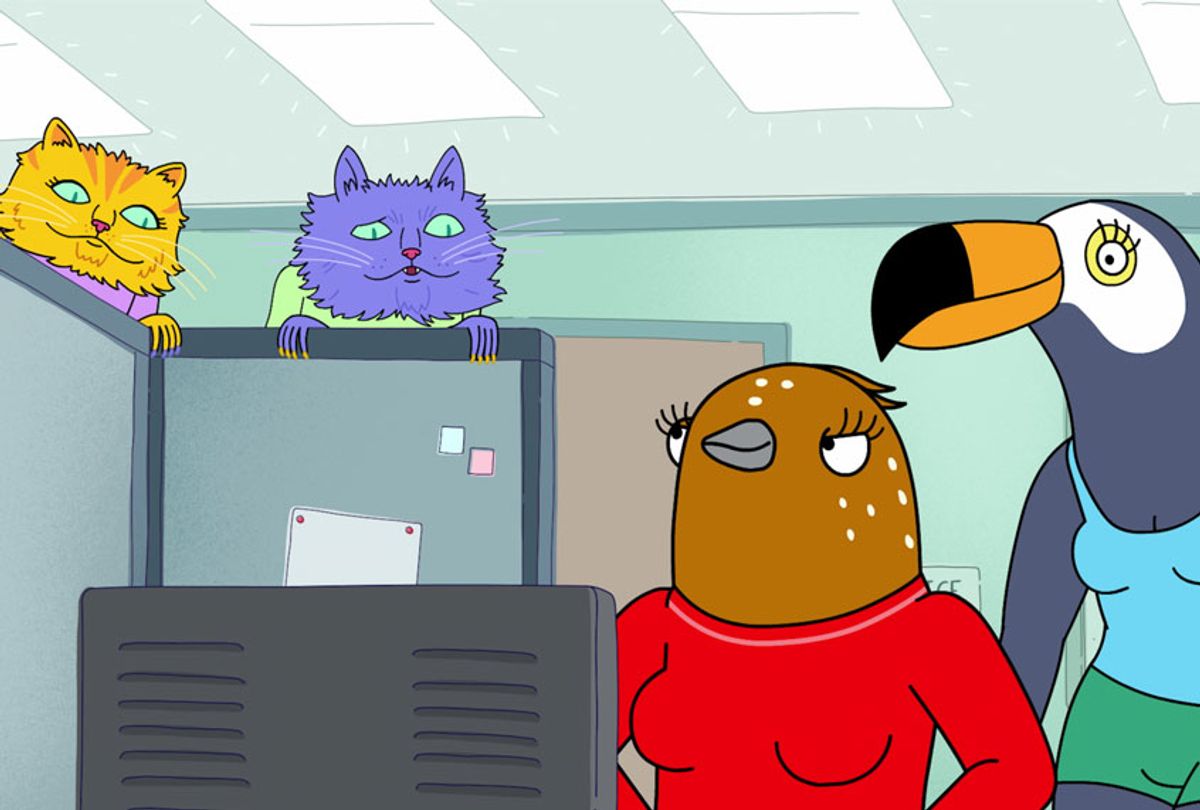 There are 13 pages of Google results when you search for articles that detail how TV shows with  relatively small, but dedicated fanbases — “Jericho,” “Cagney & Lacey,” “Designing Women” — were saved from cancellation when fans organized network protests and letter-writing campaigns. I would know; I clicked through those pages twice-over last night after show creator Lisa Hanawalt made an announcement via Twitter: “Netflix is not ordering a second season of Tuca & Bertie.”

To me, “Tuca & Bertie,” an animated series that follows the lives of the titular bird best friends, is perfect television. The writing is tight. The principal cast is made up completely of actors of color. It’s colorful and quirky. There’s a sentient (and arguably hot) houseplant who wears cut-offs and has an apartment filled with turtles, who are both pets and slowly-moving furniture.

But in cancelling the show, Netflix loses out on something bigger than just another zany adult-animation series. What struck me most about the first season of “Tuca & Bertie” is that it unexpectedly provides one of the best television portrayals of female trauma, and how the #MeToo movement plays out in kitchens.

Discussions about sexual harassment have ramped in up the restuarant industry as several big-name chefs and restaurateurs have come under scrutiny, including renowned New Orleans chef John Besh, pastry chef and TV host Johnny Iuzzini, and Ken Friedman, who owned the West Village gastropub The Spotted Pig — which had a private third floor that earned the nickname “the rape room.”

The New York City Police Department eventually closed the investigation due to New York’s statute of limitations, and lack of sufficient evidence, but several unnamed employees told the “New York Times” that Batali was “known for fostering a sexist, raucous culture that ignored misconduct by male employees and demeaned female workers.”

The article continued: “Before the #MeToo movement, however, that kind of atmosphere was hardly unique to Batali.”

Members of the restaurant industry and food media have since echoed this statement over and over again; meanwhile, film and television narratives about bad-boy chefs and drama-filled restaurants like “Burnt” and “Sweetbitter” prevailed in scripted narratives.

And while some of these stories lightly touch on the ways kitchens can become a breeding ground for sexual harassment and abuse — tight spaces, a lack of women in leadership, a general tolerance for ego-driven chefs — “Tuca & Bertie” showcases one of the most intense examinations of the industry’s problems, and it does so with nuance.

When we reach the halfway point in the first season, things are going pretty well for Bertie (a songbird voiced by Ali Wong). Bored and anxious in her day job as a senior operations analyst at Conde Nest, she’s scored an apprenticeship with Pastry Pete, the illustrious inventor of the crunt — a cruller and bundt cake combo.

During her first day on the job, Pete (voiced by Reggie Watts) runs Bertie through the basics of the bakery. “Faster, bigger, better!” he demands, to which she replies with a series of increasingly enthusiastic “Yes, Chef’s!”

By this point, viewers know Bertie has wanted an opportunity like this for a long time — she spends all her free time baking and has an encyclopedic knowledge of Pete’s professional accomplishments (“Did you know he won a ‘Tasty Num Nums Award’ last year?” she gushes to Tuca, voiced by Tiffany Haddish).

We also know, by this point, that Bertie has a crush on Pete; he’s everything that her straight-laced architect boyfriend, Speckle (Steven Yeun) is not.

“Really get in there,” Pete says, rubbing his hand up Bertie’s back as she looks into the pot of bubbling roux. Bertie begins to softly whimper and sweat in discomfort; Pete then pushes down on her head, presses his body into hers, urging her to feel it.

From that point on, Pete and Bertie’s relationship is changed, and a large part of the remainder of the series is spent unpacking its complexity, which is what sets “Tuca & Bertie” apart as a television series.

It would have been so easy for creator Hanawalt to have painted Pete and Bertie’s relationship with a broad brush; instead, she shows that harassment in the kitchen doesn’t just look like shoving someone into the walk-in or suggestively touching them with produce.

There are things about Pete that Bertie appreciates. He teaches her new pastry techniques, offers her access to exclusive industry events, and seems pleased to do so.

“Oh, Bertie, how I love seeing my world through your sweet, innocent eyes,” he says as she geeks out at her first Yeast Week, a baking convention.

He also serves as a distraction from some of mundane adult responsibilities Bertie isn’t sure she’s ready for. Speckle wants to buy a house and start a family. While he is drawing up blueprints for their nest, Bertie has sex fantasies about Pete eating pastries off her naked body.

But in the real world, she’s also ashamed of these daydreams and deeply uncomfortable with Pete’s tendency to touch her in the kitchen under the guise of teaching her.

Things take a turn when Dakota, a 22-year-old bird, starts apprenticing for Pete as well. Like Bertie, she is initially eager to learn, but when Pete tries the roux routine on her, she violently rejects his touch and quits.

Pete merely scoffs, turns to Bertie and says, “Some people can’t handle the rigors of this job.”

Dakota (Amber Ruffin) confronts Bertie, and asks if he’s ever grabbed her before; Bertie initially responds by saying that’s just how Pete teaches (“He’s very passionate.”), but then acknowledges that his behavior is indefensible.

In subsequent episodes, writers dive into some of the reasons for Bertie’s hesitancy to stand up to Pete — including childhood sexual abuse by a camp lifeguard who, like Pete, made her feel special. Eventually opening a competing bakery, which Pete tries to sabotage, Bertie tells him off: “You’re a power-tripping creep who pulls weird moves with the women who work under you.”

Pete’s fate is soon neatly wrapped. After Tuca leaks a video of him grabbing Bertie by the face and pushing her angrily against a refrigerator, he’s blacklisted. Bertie’s bakery thrives. And everyone who deserves one, has a happy Molting Day — apparently, the bird equivalent of Christmas.

It is such a satisfying moment of television, especially as I watched “Tuca & Bertie” while the food world was still murmuring about how Mario Batali is, according to the New York Times, already “eyeing his second act.” I wondered then if Pastry Pete might bring his own attempt at a redemption story in the show’s second season. In cancelling “Tuca & Bertie,” Netflix cuts short this deeply compelling narrative.

I remain optimistic, though, as does Hanawalt, that we’ll see more of “Tuca & Bertie” at some point. Last night, she tweeted: “Thank you to everyone who loves and supports T&B, and to everyone who was comforted and felt like this show gave you a voice. I’m hopeful we can find a home for Tuca & Bertie to continue their adventures.”